Home Food & Drink At Bru’s Wiffle, There’s a Foodie in Charge—And It Shows 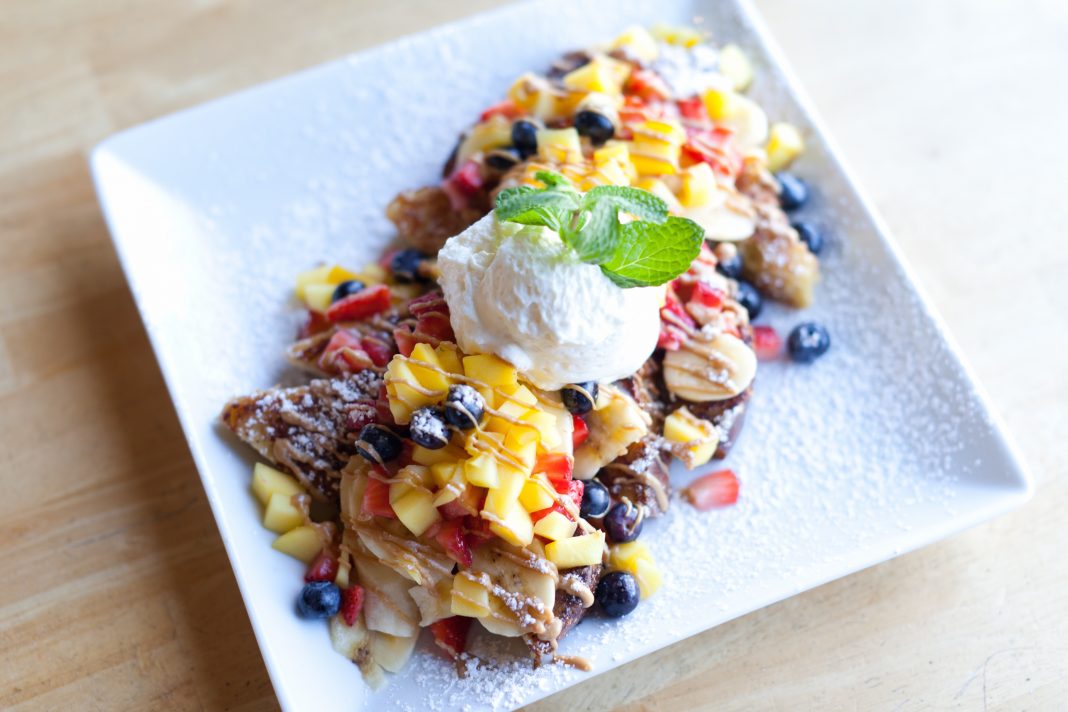 Ebru Fidan Caplan, the creator and founder of Bru’s Wiffle, gave her restaurant a playful name, and she’s even more creative in the kitchen. She loves strolling through farmers’ markets and letting the fresh produce and herbs inspire her to experiment with new flavors. She says, “Creating new dishes is my passion. I started Bru’s Wiffle with a small menu, and it developed organically.” When Caplan opened the first Bru’s Wiffle in Santa Monica in 2010, the menu included sweet waffles, topped with fresh fruit, chocolate chips and nutella, as well as savory ones topped with things like meatball marinara. After the cozy breakfast, brunch and lunch spot had been open a year or so, a customer mentioned that there was one thing missing—chicken and waffles. Caplan, who is originally from Turkey, had never heard of the classic soul food combo, but she took it as a challenge and started testing recipes. She says, “I tried a dozen different kinds of waffle and fried chicken recipes to find the perfect one.” Bru’s Wiffle now serves six variations, all made with skinless, boneless fried chicken. As her customers quickly discover, Caplan’s cooking expertise extends far beyond the waffle iron. She says, “While known for our chicken and waffles, we have a menu that caters to everyone with our own little twist on the all-American brunch, from scrumptious salads, fiery fried chicken and delicious wraps, to mouthwatering French toast selections and tasty avocado fries with mimosas, beermosas, and fresh, healthy juices.” Lunch options include burgers, sliders, salads and an assortment of crispy chicken sandwiches ranging from the Nashville Hot Chicken Sandwich to the Crispy Chicken Banh Mi. Both Bru’s Wiffle locations serve breakfast, brunch, and lunch throughout the day. When customers ask Caplan, “What’s your favorite dish on the menu?” she typically says, “Everything!” She’s not exaggerating. She says, “I will not serve anything that I don’t like. I have to be proud of what I serve and how it tastes.” That said, there are a few menu items she always finds appealing. “My personal favorites are Bru’s French Toast, the Salt and Pepper Popcorn Chicken, Bru’s Burger, the Grain Bowl, the Crispy Chicken Eggs Benedict, and especially the Nashville Hot Chicken sandwich. It manages to get the spice to slaw to pickle ratio perfectly.”

The first Bru’s Wiffle restaurant was such a success that Caplan and her co-owner—her brother—opened a second location in Beverly Hills in January 2015. It’s much bigger than the Santa Monica location, which makes it a popular spot for birthday parties, baby showers and private events. Will Bru’s Wiffle expand even further in the future? Caplan says time will tell. For now, she says, “I love to see people who are enjoying my food and coming back to something I created.”