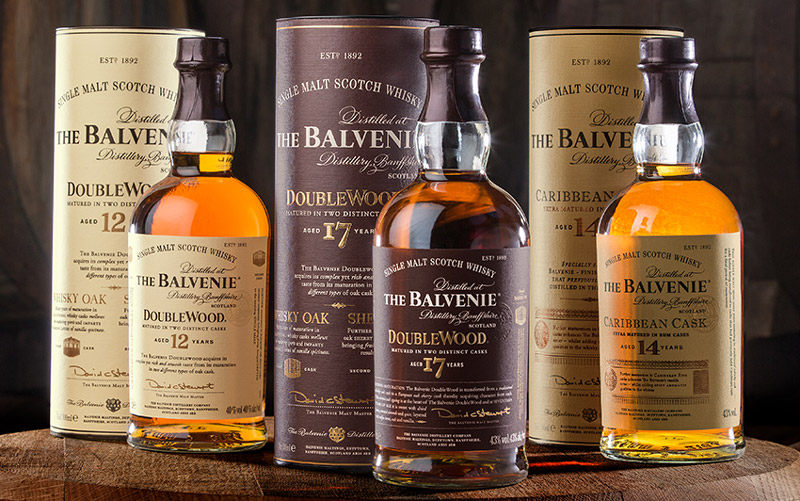 Established in Speyside, Scotland by William Grant in 1892 and still run by the William Grant family, The Balvenie prides itself on being the most handcrafted Single Malt Scotch Whisky. No other Distillery still grows its’ own barley, malts the barley on a traditional malting floor, has a coppersmith on hand to tend the stills since 1959 and has a cooperage on site where ten coopers tend and repair the precious oak casks required in making this finest of Single Malts.

Perhaps the most important craftsman involved however is the Maltmaster, David Stewart. David started at The Balvenie in 1962 and still creates this precious liquid to the present day making him the longest serving maltmaster in scotch whisky history. A pioneer of double cask maturation or “finishing” in the 1980s he created The Balvenie’s very successful DoubleWood 12 Year Old, introduced as the first of its kind and has dedicated more than 50 years of his life to the Scotch whisky industry.

This was recognised at the highest level earlier this year when he was appointed a Member of the Most Excellent Order of The British Empire (MBE) and was presented with the MBE medal for services to the Scotch whisky industry by Her Majesty The Queen at a ceremony in The Palace of Holyroodhouse, Edinburgh, Scotland.

As they say in the Highlands of Scotland let’s “Raise a dram” to this master of the craft with a Balvenie 12 year old Doublewood and salute David and all craftsmen and women around the World.