Home Well-Being The Rules Of Attraction 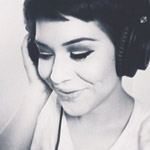 In the world of online dating, a profile picture can make the difference between a relationship status update and another night spent searching for a match. What makes one person pop and others flop? To find out, we contacted four of the most popular L.A. members of the dating site How About We and asked them their take, then hit up evolutionary psychologist Paul Watson for scientific insight. Sex Bomb: Gissell
Why she thinks she’s sexy:
“I can be playful and not take myself too seriously. I’m confident with who I am.”
The real reason:
“Gisell’s pose speaks louder than her half-hidden features,” says Watson. “It says she’s looking to mate. She’s playing with her hair, an obvious female-specific behavior by our cultural standards—the more comfortable equivalent of wearing five-inch heels.” Sensitive Dude: Ken
Why he thinks he’s sexy:
“My blue eyes, sideways smile, good nature, ability to laugh, and sensitivity.”
The real reason:
“His moderate jaw and soft eyebrow ridges keep him from seeming too aggressive, an attractive quality in a long-term partner.” His watch? It’s doing more than keeping time, says Watson. “It shows he has resources—resources he could invest in a partner.” Hot  Mama: Lola
Why she thinks she’s sexy:
“I guess I would say my eyes, because that is what guys compliment the most.”
The real reason:
“Lola’s high cheekbones and deep-set eyes suggest a hormone balance favorable for having babies. Her white top suggests cleanliness and thus good health—two pluses. Her downward gaze satisfies a primitive male concern about infidelity.” Loyal Companion: Dean
Why he thinks he’s sexy:
“I hope it’s because I seem like an intelligent, down-to-earth guy with a sense of humor.”
The real reason:
“Dean’s holding himself on the balls of his feet, showing he’s physically fit. His big jaw, cheekbones, and face reveal he has moderately high testosterone.” Dean’s dog, Prairie, deserves love, too: “Dean is someone who can connect.”