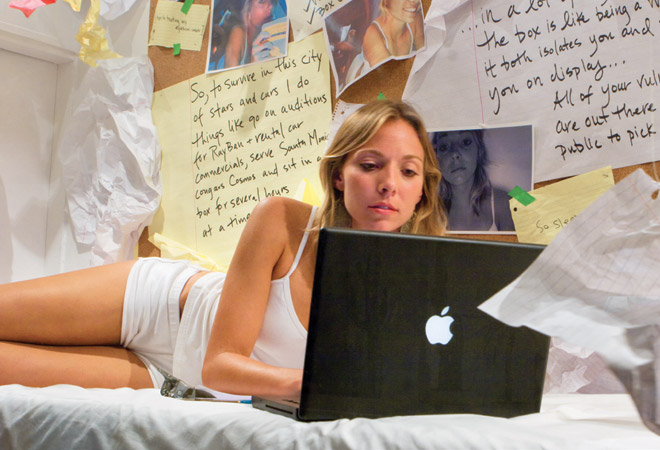 For three years on and off, I’d spend seven hours at a time inside a 15-foot-long, 4-foot-wide, 5-foot-tall see-through glass box in the lobby of the Standard hotel in West Hollywood. The box was supposed to be a peek into human nature—an art installation. We were told to behave as if we were alone in our living rooms. I didn’t have a living room, and even if I had, I wouldn’t have worn lip gloss or sat in a way that made my thighs look thin. It was a manufactured reality, of course. But I thought it was interesting to be reporting from this world—to be, in a sense, an animal at the zoo.

The box girl “uniform” was a white tank top and white shorts. We were required to wear light, natural makeup. The management wanted us to be intriguing but not in the thick-eyeliner-and-six-inch-heels tradition. While I’d like to say the box was in no way sexual—it’s not as though we were dancing or posing seductively—I am also not naive to the fact that we were barely clothed. Had we been wearing sweat suits, it might have been a different story. Not to mention, we were sitting on a bed of sorts, so the context was somewhat suggestive. There is something inherently sexy about watching people who don’t “know” they are being watched—the whole Rear Window voyeurism. It’s also bizarrely erotic observing a woman going about her business in very little clothing.

Girls could do whatever they wanted in the box: use their computer, talk on the phone, read, listen to music, even sleep. The only major rule was no eye contact with anyone outside of the box. The girl was to appear as if she had no idea anyone was watching. As if that were remotely possible. During my shifts, I got a lot of writing done. There was so much to observe. In addition to that, I’d read, waste hours on the Internet, and speak to people I’d been meaning to call back.

The strangest thing about being in the box was that hotel guests assumed I couldn’t hear them, but I could hear everything. Guys would often place bets on what time I was going to fall asleep. One time I heard a man say, “She’s got a good booty for a white girl.” There was a night when a foreign tourist leaned over the front desk, looked at me, and asked the concierge, “Is she for sale?” He thought I was a lady of the evening, one of the girls you might see in Amsterdam’s red-light district.

For me, the box represents our collective obsession—L.A.’s and society’s as a whole—with watching other people live their lives, whether in a sexual context or otherwise. The box is the embodiment of that obsession. I also see the box as an illustration of L.A.’s many wonderfully endearing inconsistencies: It’s ugly and it’s beautiful, it’s fast and it’s slow, it’s sexy and it’s smart. But is the box art or is it another L.A. gimmick? I like to think of the box as art, and I played a role in it.

Snellings’ memoir, Box Girl: My Part-Time Job as an Art Installation, hits shelves in March of next year

Inside Nicole Scherzinger’s Very ‘Intimate’ Return to the Stage

Crime in West Hollywood Skyrockets 137 Percent in One Year