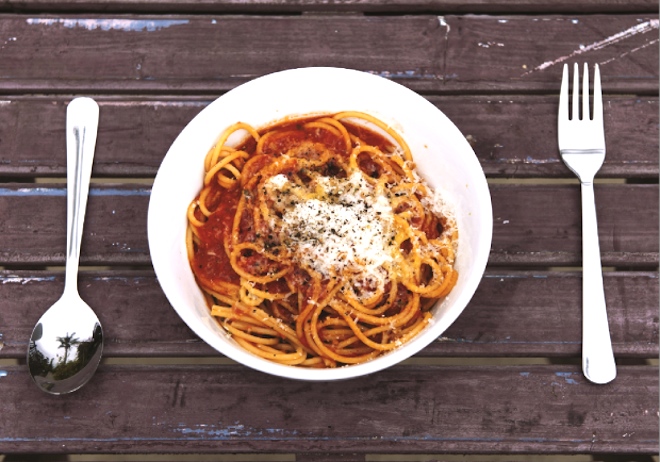 If you haven’t yet picked up a copy of Roy Choi’s book, LA Son: My Life, My City, My Food, now, today, would be a great time to get on that. Especially if you’re an Angeleno. Especially if you’re delighted by Choi’s Korean-fusion ethos. Especially if you love to cook. Don’t expect every recipe to be tinged with sesame oil and chili: Next to a recipe for a kalbi plate, you’ll find Choi’s method for $4 spaghetti on page 167. After attending the Culinary Institute of America in New York, Choi spent time with Italian friends and their families in New Jersey. His love for food, and especially pasta, was how he connected with people—each noodle was like a bridge between cultures. Even before putting tomatoes in a pot, you start this sauce by making a mushroom stock. Distilling the essence of a food down to its most pure and then layering flavors on top of it: it’s a simple technique that explains a lot about Roy Choi, Kogi, and his newest creation, POT.

After a quick brushing off of any dirt, put the mushrooms in a large pot and cover them with about 2 gallons of water. Bring to a boil, then lower the heat to a simmer. Strain the mushroom stock after about an hour and a half and reserve.

Meanwhile, combine the garlic and olive oil in a small saucepan and cook over the lowest flame possible, low and slow, for about 2 hours, stirring periodically until the garlic is a dark golden brown.

When the garlic is done, add the tomatoes along with all of their juice to another large pot. Bring the tomatoes to a boil then add the garlic confit to the pot, including the oil.

Add the mushroom stock to the tomato-garlic mixture, one gallon at first, and blend with a stick blender. You are looking for a smooth consistency. Add more stock if necessary. Season to taste with salt and pepper.

Turn down the heat to the lowest flame and cook for about 2 hours, stirring the sauce periodically. Check for flavor and adjust the salt and pepper if necessary.

Heat up a big pot of water, add ½ teaspoon of salt and a touch of olive oil, and bring it to a boil. Cook the spaghetti just until it’s al dente, about 8 to 10 minutes.

Drain and divide the spaghetti between all the bowls. Toss immediately with the sauce-about a cup of sauce for each bowl of spaghetti. Garnish with the basil and Parmesan Reggiano.