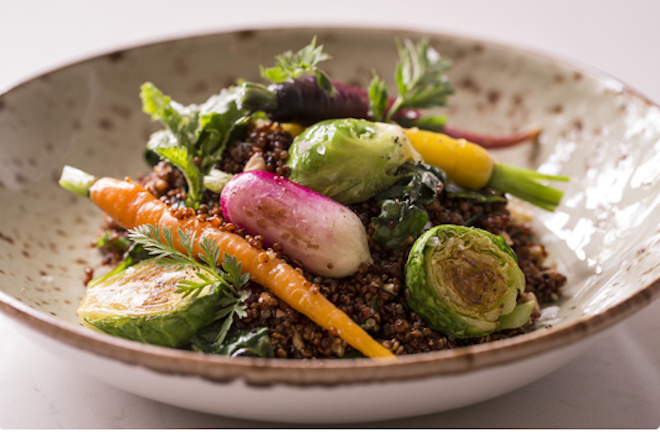 Happy Pesach, everyone! The Jewish holiday of Passover is this week, which is when many Angelenos gather over platters of brisket, steaming bowls of matzo ball soup—and, for the brave, gefilte fish—while telling of the Jewish exodus from Egypt. A vast cornucopia of foods are off-limits for the occasion, most notably grains including wheat, barley, rye, and oats. The Rabbinical verdict is still out on quinoa, however. The sprouted little buggers are members of the botanical goosefoot family, which includes spinach and beets, so most authorities think they’re fine for Passover. That’s great news when you’re looking for something to bulk up your Seder spread besides Bubbe’s famous kugel. Cast & Plow, the new restaurant at the Ritz-Carlton in Marina del Rey, serves a vegetable-packed red quinoa bowl that would add color to any meal—religious or not. This time of year it’s loaded with heirloom carrots, romanesco, tomatoes, and Brussels sprouts and dressed with a citrusy sherry vinaigrette. We’re pretty sure Moses would approve.