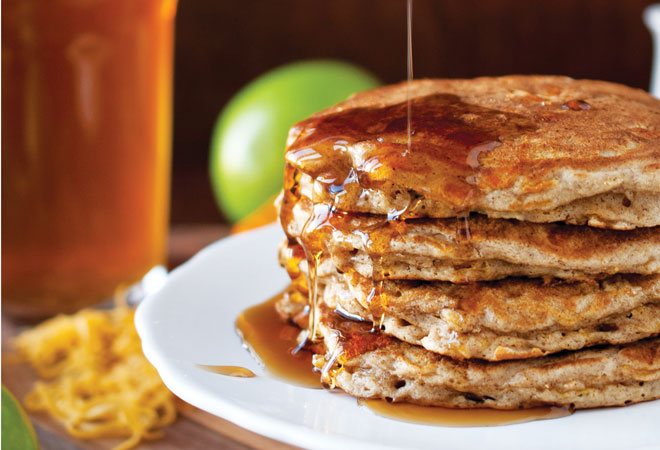 Quick! Look outside! It’s fall! The spate of 95-degree days has finally given way to these glorious rainclouds, providing a long-overdue excuse to eat the heartier foods of the season—and drink a few heftier libations. It’s Oktoberfest, after all, which means we’ve got beer on the brain. Here to help is L.A.’s Jacqueline Dodd of the suds-based cooking blog the Beeronness. Dodd marries her two loves—food and beer—to create recipes that are as delicious as they are booze-loaded, and she has compiled 100 of them in her recently released The Craft Beer Cookbook. In it, you’ll learn to make an IPA puttanesca sauce and porter-braised pork sandwiches, but we’re most impressed by Dodd’s ability to sneak some beer into our morning meal with her Apple Cheddar Beer Pancakes. A bright pilsner or blonde ale adds a hoppy bite to sweet cinnamon-flecked griddlecakes. They’re just the thing to set us right for the day—or send us right back to bed. Either way, we’ll gladly take a short stack.

Apple and Cheddar are one of those improbable flavor combinations that most likely started with a dare and ended with an epic pairing. There is just something about the tang of Cheddar and the sweet acidity of apples that work so well together. Add in some beer and you have yourself some unforgettable pancakes.

Directions:
1. Preheat an electric griddle to 350°F or a large skillet over medium-high heat.
2. In a large bowl combine the flour, sugar, baking powder, baking soda, cinnamon, and salt. Add the cheese and apples, and stir to combine.
3. In a separate bowl whisk together the beer, buttermilk, and melted butter. Add the egg and whisk to combine.
4. Make a well in the dry ingredients. Add the wet ingredients and stir until just combined.
5. Push the remaining 2 tablespoons butter around the griddle or skillet until melted.
6. Drop about ¼ cup of batter onto the buttered cooking surface. Cook until the underside has browned and the edges have started to dry, 2–4 minutes. Flip and allow to cook until cooked through, an additional 3–5 minutes. Serve warm with syrup.

Choose the Right Brew!
Grab a medium-hopped beer with notes of cloves and cinnamon for this recipe. A pilsner or blonde ale will do fine, but for a more intense beer taste look for a higher dose of hops.

Excerpted from The Craft Beer Cookbook Copyright © 2013 by Jacquelyn Dodd and published by F+W Media, Inc. Used by permission of the publisher. All rights reserved. Photographs by Jacquelyn Dodd.