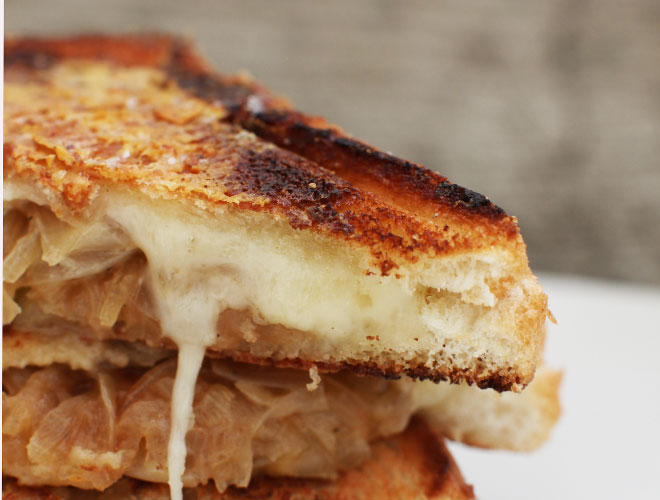 April is national grilled cheese month. And while we’re about as into meaningless food holidays as we are the second season of Smash, we’re always looking for another reason to bulk consume buttered bread and melted cheese. To celebrate, we went to our favorite masters of the dairy arts and five-time Grilled Cheese Inviational “F*cking Champions,” Hot Knives. The vegetarian beer blogging and cookbook-scribing duo are gearing up for the release of their second masterwork, called Lust for Leaf, in June (Salad Daze came out in 2011). Until then, they can be found compiling boozy edibles like this beer-based twist on the classic sammy that evokes all the richness of French onion soup—complete with crispy crouton. “There’s one way to eat this sammich,” they advise. “We call it the ‘crunch-slurp’ method. It’s probably as close as you will ever come to sipping a beer as a sandwich.” Well then, cheers.

Directions:
1. Heat a medium-sized pot on medium heat. Add the butter and let it blister. Add the onion and cook uncovered. Let them sit for about four minutes and then stir. Repeat until the onions have all begun to brown.
2. Add the olive oil, garlic, and shallots and stir in the same fashion as before, once every five minutes, until the garlic and shallots have caramelized.
3. Add the beer and crank the heat to just shy of high. Let the beer boil off until there is half as much beer volume as onion volume.
4. Add the stock, bay leaves, thyme, and white pepper. Cook until the liquid has reduced by about two finger widths. Taste the soup and add salt to adjust. Cook for at least an additional twenty minutes before garnishing. In an ideal world, you would let the soup sit a day before serving it.
5. To assemble sammich, start by straining any residual liquid from your beer onions, using only the onions (reserve stock for later use).
6. Choose a pan (cast–iron!) wide enough to fit two sandwiches. Place pan on medium-high heat for up to five minutes or until thoroughly hot. Turn down to medium and begin grilling.
7. Butter one side of all the slices of bread. Top two of the slices with cheese and place them butter side down in the hot pan. It should sizzle but not too explosively. Using tongs, add about ½ cup serving of onion mixture to the cheese, followed by a knife’s worth of grain mustard. Top both with the second slice of bread and press down carefully (use a pot or other heavy object for consistent weight).
8. Checking the bread that’s face down every minute, let cook until bread is golden brown. Flip gingerly with a spatula, apply more butter and press down. Repeat until cheese is thoroughly melted.
9. Now create the Parmesan crust: remove both sandwiches and re-apply more butter to pan, then sprinkle Parmesan where the slices where the bread was sitting. Quickly return both sandwiches and press. After a minute, repeat with other side.
10. Remove sandwiches from heat. Let sit for two minutes under a bowl, to let the cheese settle and gel, then slice and serve. Garnish with thyme leaves.