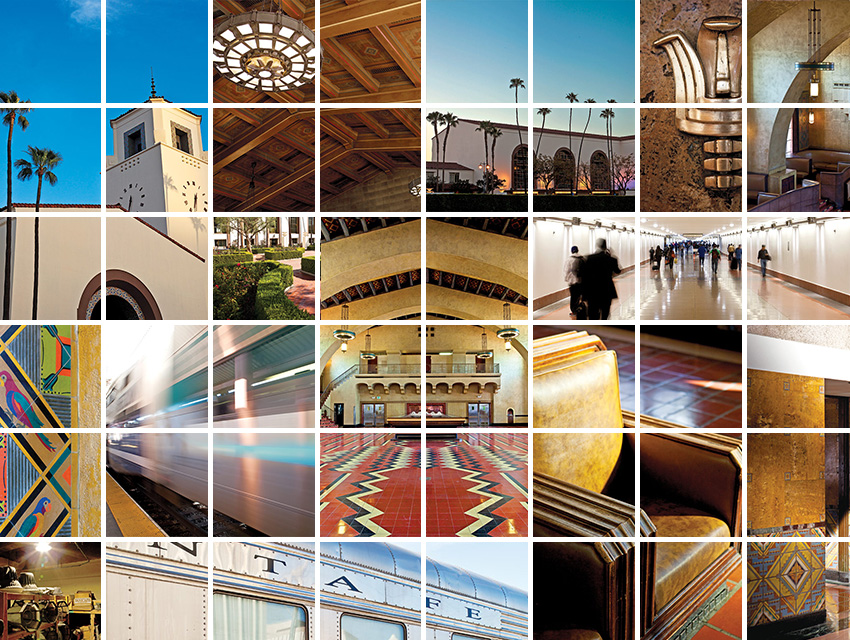 Down in the spooky basement of Union Station is a jumble of disintegrating ticket rolls, dusty wheelchairs, and shadows that aren’t there when you turn around. Discarded fixtures litter the dim cellar, including signage from the long-gone Union Bagel noshery and a final example of every otherwise junked station design element, down to the lowliest sconce and wainscot.

Climb the rusty basement stairs, and the grandeur of Union Station will gobsmack you. The eye can’t take it all in with a single sweep—the glamour and glint of its Gladding McBean tile, the rows of hardwood and leather chairs, the seeming weightlessness of its one-and-a-half-ton chandeliers, like gorgeous wagon wheels levitating below the vaulted ceilings. Seventy-five years after passenger cars began rolling into this, the nation’s last great train depot, the city’s recent rediscovery of Union Station amounts to something very much like a miracle.

Anniversaries, like biographies, tell us at least as much about our own era as they do about the subjects they commemorate. Union Station’s 50th, circa 1989, must have felt like a funeral. An old Southern Pacific Daylight chugged in from a rail museum, its arrival cheered by a few men in striped engineer’s caps. For the rest of the city, what was there to celebrate? When the Los Angeles Times columnist Jack Smith wandered through 25 years ago, the station that had seen 6,000 passengers a day during World War II had just 9 in its cavernous waiting room.

That is decidedly no longer the case. Current ridership hovers around 70,000 passengers a day. In other words, what with Amtrak, Metrolink, the Gold, Red, and Purple lines, and all the buses around back, Union Station is handling a million more people every 14 days than it did during its wartime heyday. Like the wiring of a faded dowager hotel that’s suddenly accommodating plasma TVs and high-speed Internet connections, the station is struggling to bear all that added load.

Just in time for the station’s 75th anniversary in May, scaffolding went up months ago. Painters, masons, wayfinding signage experts, and other specialists have spent this spring buffing the old girl to a high shine. The hoopla is likely to get Angelenos jazzed about a new master plan for the station and its 40 acres, due soon from two collaborating firms, London’s Grimshaw Architects and local boys Gruen Associates. (Don’t mark your calendars just yet: Estimates of how many years any revamp will take, at least from Metro officials, tend to end in zeroes.)

Metro and the city it serves want Union Station to be even more than a 21st-century rail hub. They want an inviting public space. Landscape architect Mia Lehrer, who designed the new gardens at the Natural History Museum and the path around Silver Lake Reservoir, is working on a scheme to transform the parking forecourt with cultural events and a farmers’ market. Inside, food carts and other “demountable retail merchandising units” may appear. Metro’s recent success in screening such films as Chinatown in the grand Ticket Hall, plus hosting the site-specific opera Invisible Cities, has planners envisioning a much fuller arts and entertainment calendar. The breathtaking former Fred Harvey restaurant next door—with its giant ribs crisscrossing the beamed ceiling and the zigzag of architect Mary Colter’s signature Navajo motifs across the enameled tile floor—has been promised a new tenant, though Los Angeles has heard that one before.

The surrounding block—bounded by Alameda, the 101, Vignes, and Cesar E. Chavez—is Metro’s to develop. Union Station is on the National Register of Historic Places, but views of it, and from it, enjoy no such protection. In 1999, the artist James Doolin—the Albert Bierstadt of urban Southern California—painted murals for Metro headquarters depicting the city through history. On the mural projecting the future, you can barely make out the station for all the skyscrapers around it.

Union Station may be the sole thing in L.A. history that we perfected only after the rest of the country had already tried it. The first station uniting several railroads into a single terminus went up in Indianapolis in 1853. By the 1930s, the ascendance of air and car travel had the iron horse limping. It fell to the architectural practice of the Englishman John Parkinson and his Los Angeles-born son Donald to build the place. During the previous decade, the Parkinsons had led or assisted in the design of City Hall and Bullocks Wilshire, as well as the Coliseum for the 1932 Olympics. Downtown interests wanted a terminal unlike any other, something quintessentially Southern Californian.

What the Parkinsons delivered was a revolutionary hybrid of Spanish colonial revival and streamline moderne. Neither of these styles was completely new to the firm. “You should perhaps look at Union Station as the sum total of their architectural experience,” says the British TV journalist and Parkinson biographer Stephen Gee. “John and Donald Parkinson weren’t afraid to experiment, although they are never given much credit for it.”

Like the metropolis germinating around it, Union Station was a mishmash, well suited to an aspiring downtown with such nearby neighborhoods as Little Tokyo, and right in the plan’s crosshairs, Chinatown. Evicted to make way for the station were more than 3,000 Chinese, one or two of whom had probably helped build the Transcontinental Railroad that started all the trouble 70 years before. (It was a DWP engineer by the name of Peter Soo Hoo who helped create a new Chinatown, which broke ground around the time Union Station did, just down the hill from Chavez Ravine.)

After collaborating on the station’s blueprint, John Parkinson died in 1935, bequeathing his T square to Donald. Like most bequests, the team’s concept was diminished by the government. The artist and filmmaker Hugo Ballin, whose murals already adorned Griffith Observatory and Wilshire Boulevard Temple, had sketched a western scene of manifest destiny, complete with a Conestoga wagon. When money got tight, the plan for the mural had to go. Still, you could spend your life in Union Station and always notice something new.

Graceful yet haunting, the station sees no royalties for its cameos in dozens of movies. Production designer Jeannine Oppewall, who worked on L.A. Confidential and Catch Me If You Can, remembers stumbling into the darkened Fred Harvey, “turning on the lights, and discovering something beautiful that I had never seen before.”

Even at the station’s 1960s and ’70s sleepiest, nobody ever dared take out a demolition permit. But Union Station didn’t owe its survival just to preservationists: For a long time the land underneath wasn’t worth the nuisance of knocking the place down. As the station’s director of property management, Ken Pratt, remembers, “Used to be, come five o’clock, people left downtown like it was on fire.”

The station had been constructed as a way to simplify and celebrate train travel in the city. L.A.’s first station, built in 1869, was a humble structure at Commercial and Alameda streets, supplanted seven years later by the River Station, a more ambitious affair on the edge of the old Chinatown. (On the same land lately, in Los Angeles State Historic Park, joggers from across the river run rings around the dog walkers from the arts district.)

Other terminals would rise and fall, including one built in 1914 by John Parkinson himself, as the fight to build a union station for L.A. dragged on for decades. Only after the obstructionist railroads caved and the need for jobs during the Depression created a ready workforce could the city shunt Union Station onto the fast track. Not until ’39, within view of the plaza where the pobladores founded L.A. in 1781, could all the lines converge. Today Union Station stands in stark contrast to the East Los Angeles station in the City of Commerce, a small, long-empty relic—fenced off, guano tagged, lonesome as a train whistle.

Should the California High-Speed Rail Authority ultimately succeed in sending America’s first 200-mile-per-hour transit into Los Angeles, plans call for a stop at Union Station en route to Orange County and San Diego. Figuring out how a 1939 heirloom could accommodate the massive infrastructure that bullet trains require while also satisfying tenants, preservationists, and bus riders could take even longer than getting the station built in the first place. But if things break just right, a prodigiously augmented yet fundamentally unmucked-with Union Station may finally outrace the nation at something after all.

Until then the station stands poised between 1939 and tomorrow, its clock tower rising above its red-tile roof within view of downtown buildings that haven’t been this thoroughly occupied for decades. The tower itself is off-limits. A locked door blocks access to the crooked staircase leading to the echoing base of a hollow 135-foot-high pylon. From there an old ladder encircled with iron bands stretches all the way to the top. (This is presumably so that if you lose your grip on the way up, you can be knocked mercifully unconscious on the way down.) Some years station employees crawl through the distant trapdoor at the top only twice—once to set the clock forward, and once back.

This feature originally appeared in the May 2014 issue of Los Angeles magazine.

David Kipen wrote about A. Scott Berg in the September 2013 issue.