Home Uncategorized The One Sheet Wonder 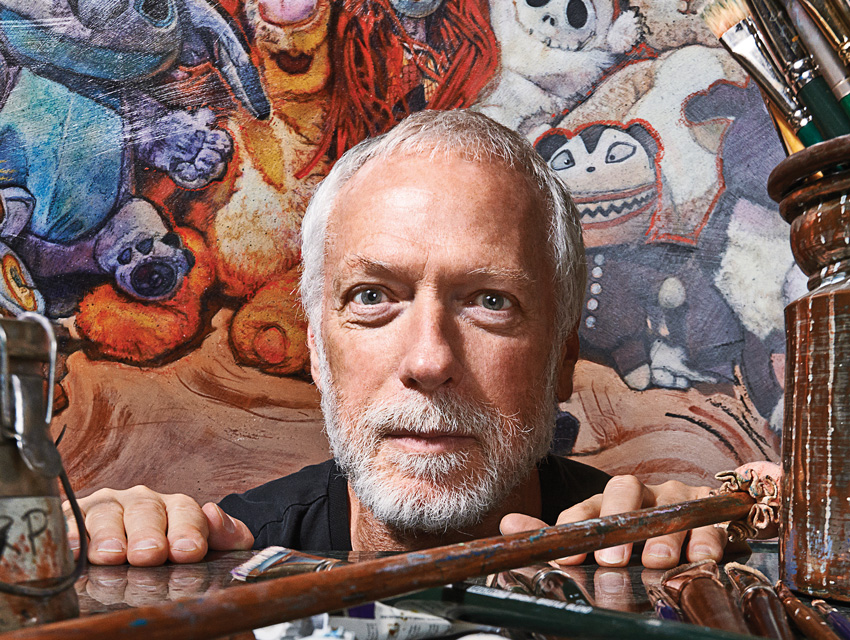 As a small child, Drew Struzan drew before he spoke. “My mom said if I wanted a drink of water I’d draw a faucet with water coming out of it,” says the legendary poster artist, who is now 66. “All I wanted to do was draw and paint.”

He got what he wanted. To view his work is to remember some of the iconic images of movie history. Marty McFly syncs his watch with Doc for Back to the Future, Indiana Jones cocks an eyebrow for Raiders of the Lost Ark, a famous boy wizard grips a sword for Harry Potter and the Chamber of Secrets. Using acrylic paints and colored pencils, Struzan creates visuals that are equal parts dreamy and lush. What they don’t do is tell a story. “If you want a story, go see the movie,” Struzan says. “It’s pure feeling instead of all the other stuff behind it.” His knack for turning a film’s essence into a one-sheet has won him a loyal clientele of directors, from George Lucas to Steven Spielberg to Guillermo del Toro. At one point Struzan was so in demand that he worked 100-hour weeks for eight years straight without a day off. The pace has slowed, but he’s still drawing. Recently another repeat customer, the director Frank Darabont, hired Struzan to do the poster for his new TNT series, Mob City.

Asking Struzan if he has a favorite work is futile. “If I had a favorite, then I would have already done the best I can do,” he says. “I’d lose my spark of creativity. My favorite is always the very next one.”

An exhibition celebrating Struzan and the late Bob Peak, who created posters for the first five Star Trek movies and Apocalypse Now, among other films, opens January 24 at the Forest Lawn Museum, 1712 S. Glendale Ave., Glendale, 323-340-4921.

Quotes from the 2013 documentary Drew: The Man Behind the Poster:

“If you can get Drew Struzan to do a poster, it’s almost worth making movies just for that.” — Frank Darabont

“For my generation and the generation right before me, Drew Struzan was the movies.” —Guillermo del Toro

“I’m a Drew Struzan fan…. [He] could even make the Wookiees look good.” — George Lucas

“I had to almost live up to the art that we later were going to ask Drew to create for the poster.” — Steven Spielberg

As the Oscars Approach, These 3 Movies Rise Above the Rest