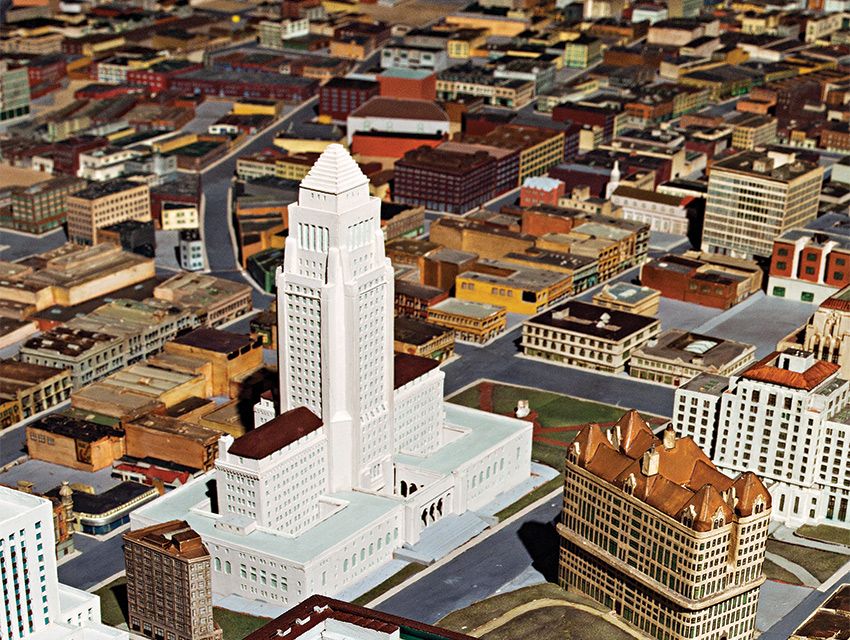 The city of Los Angeles was officially founded on September 4, 1781, though our origin story spans thousands of years. For a century, the Natural History Museum of Los Angeles County has been collecting objects and specimens that chronicle our native lore. Here are a few pieces from the museum’s exhibit, Becoming Los Angeles, which tell our city’s tale. Monk’s Sandal
(1880s)
Father Francisco de Jesus Sanchez came to Los Angeles from Zacatecas, Mexico, in 1842. A preeminent padre, he oversaw charitable works at missions in Santa Barbara, Ventura, and San Gabriel. His trek from one mission to the next required a sturdy pair of leather sandals. Sanchez was so beloved among his parishioners that shortly before his death in 1884, Helen Hunt Jackson sent artist Henry Sandham to paint his portrait for her book Ramona. Perhaps acknowledging that his era had come to an end, Sanchez gave his cowl, robe, cord, and sandals to Sandham as a gift. Pieces of his garb were destroyed in a house fire, and the rest—including this solitary shoe—became part of the collection when the museum opened in 1913. Mission Door Lock
(early 1800s)
As the first Franciscan monks began building missions across California, the native Tongva (also known as the Gabrielino) made for an instant labor force, constituting the majority of residents at Misión de San Gabriel Arcángel. By the 1770s, as many as 800 indigenous workers tended to crops, cattle, and mission construction, but unjust treatment, along with the ascetic lifestyle the holy Spaniards imposed on the locals, led to conflict between the Tongva and the foreigners. The missionaries installed locks like this one on the compound for protection. Tongva Canoe Fragment
(circa 300-1800)
When the City of Los Angeles was founded in 1781, the Tongva had already inhabited the area for thousands of years, settling along the waterways from the San Gabriel Valley to Thousand Oaks. For ocean voyages they traveled in canoes made of Torrey pine planks lashed together with plant cords and sealed with pine tar and pitch. In 1939, the Natural History Museum dispatched a team of archaeologists and anthropologists to San Clemente Island for an exploration of its forgotten hills and caves. The Tongva had settlements on the island until 1800. The museum team found vessel fragments and other artifacts of the tribe. Mission Cattle Brand
(early 1800s)
The ground has been shaking here since long before the advent of the Richter scale. In 1769, monks recorded their impressions of our landscape after experiencing a week of violent shocks. Little wonder, then, that they named a river, a mission, and a cattle ranch “Temblores,” or “earthquake.” The T and S on this branding iron not only represent the mission trademark, but speak to our ranching industry and unpredictable geology. As American history superseded Mexican history, prominent Californio Antonio Coronel began collecting items from a disappearing age, and his widow later donated them to the museum. Vice Collection
(1850s)
A whiskey glass, poker dice, and a Colt .38 made for a Saturday night out in Wild West-era Los Angeles. After the Mexican government fell to American forces in 1848, it was any–thing goes. Bounty hunters, vigilance committees, and lynch mobs were the rule of law in the mid-19th century. The mayhem led to the founding, around 1850, of the L.A. County Sheriff’s Department, but the lawlessness would not be controlled for decades. Disputes over gambling, property lines, and racial tensions would often escalate, hence the demand for at least one of these weapons. Soy Sauce Jug
(1870s)
Deep inside Union Station is a fountain made from pieces of old Chinatown. When the Red Line tunnels were being excavated in 1989, more than 200,000 artifacts were uncovered that attested to the everyday life of those waves of immigrants who had arrived to help build the transcontinental railroad. This teapot-size ceramic jug represents the early development of an area that thrived for 50 years. Those displaced by the train depot, including community leader Peter Soo Hoo, relocated a few blocks west, and a “New Chinatown” emerged where Little Italy once stood. Chaplin Flower
(1931)
A blind flower merchant offers the Little Tramp this silk carnation in a key scene from Charlie Chaplin’s greatest film, City Lights. The actor also gifted the costume he wore, from his battered bowler to oversize shoes. Pickford Curls
(1928)
Director George Cukor once said Mary Pickford “invented screen acting.” When she stopped playing little girl roles in 1928, she clipped her famous ringlets and later gave them to the museum. Streetcar Sign
(1948)
While the Pacific Electric is best remembered, many more passengers rode the Yellow Cars of the Los Angeles Railway, which transported 255 million-plus riders at its 1924 peak. By 1947, the renamed Los Angeles Transit Line was using this signage to mark the W Line that ran from Mid City to the intersection of Figueroa Street and York Boulevard in Highland Park. The red bar means it traveled only part of the route before changing direction. The entire system was abandoned in 1956, but a $125 million downtown streetcar that follows much of the city’s first route is set to open in 2016. “Kennedy Cuties” Dress
(1960)
The potent cocktail of politicians and celebrities began with John F. Kennedy’s presidential bid. The city had never hosted a national political convention before, so the stars came out for the 1960 Democratic National Convention. With Frank Sinatra and Judy Garland in attendance, JFK addressed the crowd at the Beverly Hilton. Also at the event were a bevy of young women whom Life magazine dubbed “Kennedy Cuties,” dressed in boater hats, white gloves, pearl chokers, and red, white, and blue cotton dresses with felt letters on the sash. The second E on this frock disappeared after the donor’s granddaughter modeled the dress just before it made its way to the museum. Manzanar Trunk
(1942-1945)
Four months after the attack on Pearl Harbor, the U.S. government posted citywide edicts addressed to “All Persons of Japanese Ancestry,” who were given one week to relocate to camps around the country, including a hastily built facility in the Owens Valley 250 miles north. The  Civilian Exclusion Order forced thousands to give up their homes, businesses, belongings, and freedom for the duration of the war. A Baptist reverend named Takeshi S. Ban was among the 10,000 people sent to the Manzanar War Relocation Center from 1942 to 1945. With few resources, he fashioned a trunk out of scrap wood and found objects, including bottle caps for feet. Car Grease Tin
(circa 1918)
America’s third-largest corporation has roots in an oil field near Magic Mountain. Long before it was part of Chevron, Standard Oil Company of California joined other wildcatters looking for black gold under L.A. The first of its wells gushed at Pico Canyon, followed by others in Whittier, Fullerton, Montebello, and Baldwin Hills. With a steady supply of petroleum, Standard—as well as the predecessors of Shell, 76, and Mobil—sold their fuels in service stations stocked with products, like this tin of lubricating cup grease. St. John Knits Top
(1970)
The fashion business in L.A. is a $13 billion industry that provides more apparel jobs than New York City. A thread of this success can be traced to Marie Gray, a former TV model on Queen for a Day who created a knit dress in her San Fernando Valley home in 1962. Not long after, her husband, an apparel merchant, sold Gray’s design to Bullocks Wilshire and specialty shops. With St. John Knits, Gray designed a line of woven tops and pantsuits for California’s most stylish women, including Nancy Reagan and Gloria Allred. The business is still a force in L.A. couture; annual sales are more than $250 million. Barbie Doll
(1960)
Elliot Handler started as a picture frame maker in 1945. He and his wife, Ruth, soon began to turn wood scraps into dollhouse furniture, and two years later the newly formed Mattel (named after Elliot and his partner, Harold Matson) had its first hit with the Uke-A-Doodle. In the mid-1950s, Ruth observed that most dolls were modeled after babies, yet her daughter, Barbara, preferred adult-looking paper dolls. While traveling in Germany, Ruth picked up Bild-Lilli, a blond doll with womanly features and nterchangeable clothes. After some tinkering, Mattel introduced its version of a “Teen-Age Fashion Model” at a New York toy fair on March 9, 1959. Barbie has since helped Mattel thrive; the El Segundo-based company earned $6.4 billion last year. Her 39-18-33 measurements have been controversial from the beginning, but she remains, for better or for worse, the plastic epitome of the California girl. Eames DKX-2 Chair
(1951)
Charles and Ray Eames were filmmakers and designers who set up a studio in Venice Beach in 1943. The husband-and-wife team experimented with fiberglass, wire, and aluminum seating, which has come to define midcentury modern design. Millions of chairs found their way to schools, cafeterias, libraries—and the Natural History Museum. During a 1990s renovation, a staffer spotted this “bikini” model in a trash bin and plucked the collectible from the heap. Aqueduct Souvenir Water Bottle
(1913)
Thirty thousand Angelenos showed up on November 5, 1913, to watch William Mulholland open the spigot for our parched city. The water engineer’s grand vision—a 223-mile aqueduct to siphon H2O from the OwensValley—would not only feed the lawns and quench the thirst of 300,000 Angelenos, but allow developers to turn the orchards of the San Fernando Valley into well-irrigated subdivisions. Some spectators went home with acommemorative bottle. Some angry farmers and ranchers plotted revenge: The pipeline was dynamited at least eight times. Nonetheless the search for agua continues.

A photo portfolio by Henry Leutwyler with text by Chris Nichols

Fascinating Objects Tell the Story of L.A. in This Revamped Exhibit