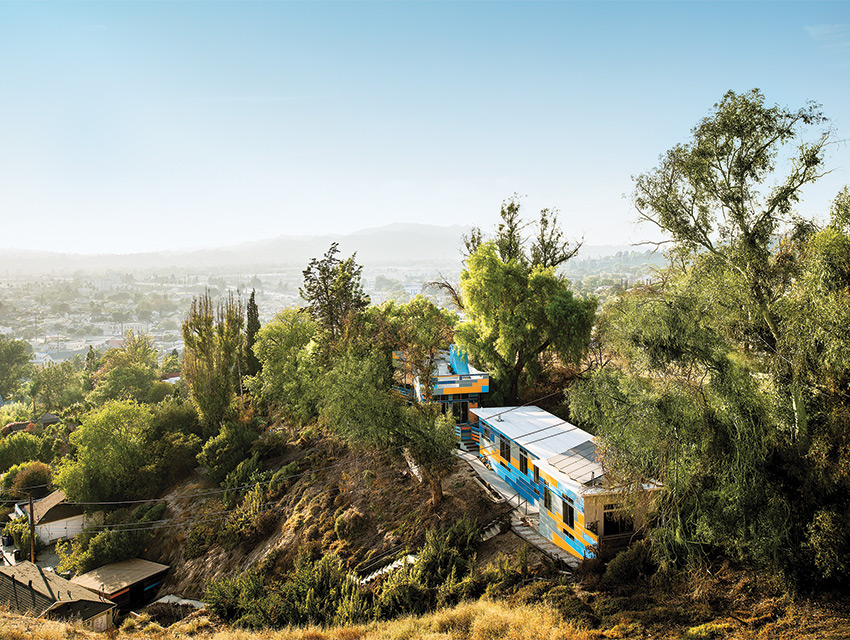 The house atopa Glassell Park ridge floats like a flag, its facade emblazoned with stripes of orange and blue. Owner Mark Vallianatos and architect Jeremy Levine say the colors were inspired by an abstract expressionist show they attended at the Norton Simon Museum. But they’re also a reference to sun and rain, the “good stuff from the sky,” says Val-lianatos. He and wife Ana are avid proponents of sustainable living. They wanted to put into practice what they preach to the public, she as a senior marketing and communications officer for the Metropolitan Transit Authority and he as policy director of the Urban and Environmental Policy Institute at Occidental College. Solar energy and gray water systems were installed along with a “reservoir” of repurposed industrial containers that hold rain siphoned from the roof. The design of the windows and doorways makes maximum use of cooling breezes. By the time the couple purchased the 800-square-foot house in 2010, it was the neighborhood eyesore. With Levine they planned the dramatic new exterior and the addition of a 525-square-foot annex that serves as a master bedroom suite. Construction was a challenge, as the 1952 house is only accessible by a stairway of 71 steps. On weekends the pair retreat to the annex roof and its views of Forest Lawn Memorial Park in Glendale. “We both love Los Angeles,” says Mark, “but we think it could become a better and more livable space through what you would call ‘green urbanism’: less suburban, less car oriented, more walkable, more sustainable, with more chances for residents of all ethnicities, income levels, and ages to shape the future.” And that starts, of course, at home. Mark works from a sofa upholstered in his favorite color—orange. The original 1952 home was transformed into an open-plan kitchen/dining/living area with a guest room (not shown). Ana and Mark and their German shepherd, Wolfgang, join architect Jeremy Levine on the roof of the annex, which overlooks Forest Lawn Memorial Park in Glendale. The 525-square-foot annex serves as a bedroom and an office. Doorways and windows were designed to channel breezes into the room so the owners could forgo installing air-conditioning.

When their children, Erin and Nate, were small, Bob and Naomi Odenkirk would join them in the evenings on the concrete terrace with the forever views, everyone on some sort of scooter. Riding around, they would fall into easy conversations about school, friends, life.

The design of the Beachwood Canyon house had capitalized on the hilltop scenery since its genesis in the 1940s. Now the former Saturday Night Live writer and his family were savoring it along with a remodel by architect Linda Brettler. Adding on to the 2,600-square-foot house was prohibitive because of the expense of drilling into 20 feet of bedrock, so Brettler looked to enhance the existing space. The basement became a bedroom suite for Nate. The kitchen pass-through into the main living area was expanded.

“I fell for this place about ten steps into the living room, taking in the immediate impact of the sweeping view of the city and canyon,” says Bob, whose role as attorney Saul Goodman on Breaking Bad is reprised in a new AMC series, Better Call Saul, premiering in February. “The quiet, the bird’s-eye view, the clean, modern, simple design—it all felt great.”

In the Odenkirks’ bedroom, which shares a wall with the garage, Brettler paneled over the brick with rectangles of birch plywood stained to resemble a giant cubist art piece. Nate’s bathroom is equally resplendent in color blocks of red, black, and gold on the cabinet and walls. An elevated outdoor dining area was constructed next to the terrace, with ceramic leaves embedded in the concrete to evoke windblown foliage.

Naomi, a producer and comedy talent manager, likes to take scripts to a corner of the original wood porch, where she sits on a tall chair, occasionally glancing up at Griffith Observatory or down at Lloyd Wright’s Samuel-Novarro house (famously restored by Diane Keaton). She’ll miss these moments now that she and Bob have decided to sell the house. “Going out onto the porch after a stressful day of getting my ass kicked by Hollywood has been good for me,” says Bob. “Standing apart from it all and finding some perspective.”

A brick wall in the master bedroom acquired a colorful wood covering. The light fixture is a vintage Achille Castiglioni pendant.

Bob and Naomi Odenkirk join architect Linda Brettler (far right) on a dining platform that was created next to the terrace.

What Does the New Behind-the-Scenes Better Call Saul Video Reveal About the Show?

Breaking Bad: It Really Is All About Saul