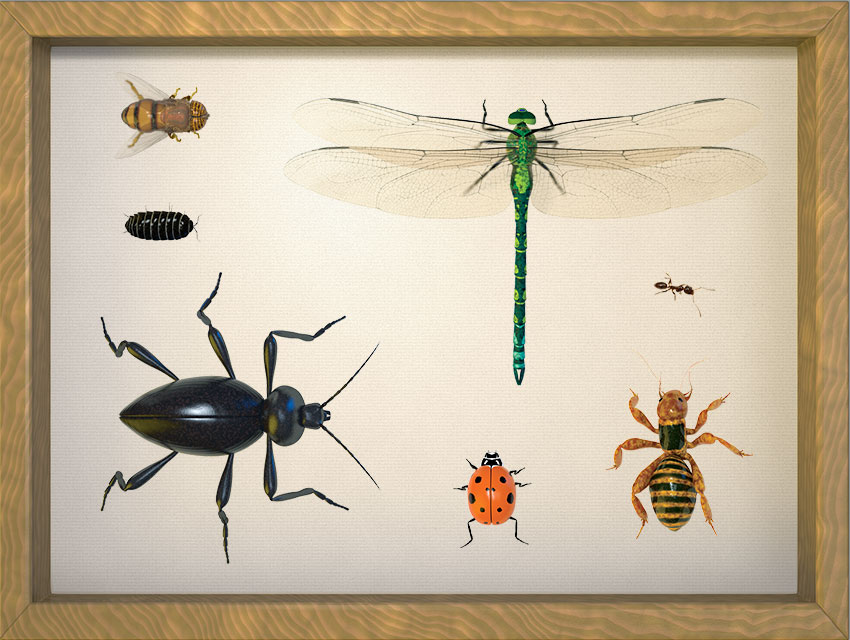 Yeah, we know all about the cockroach you’re sure was four inches long (urban myth!). And that you vanquished the giant mosquito flying by the bed (you killed the wrong guy!). Few living things in L.A. are as underappreciated as insects and arachnids. What we should be is proud of these creatures. We have more species (entomologist Brian Brown speculates 10,000) than any other major metropolitan area. They perform admirably in an ecosystem that needs them—as food for other animals, as consumers of detritus, as pollinators of flora. And a measly 1 percent of insects are capable of human harm. Meet some iconic denizens. Bound to a life on the ground—Mother Nature fused their wings—these inch-long, drought-tolerant wanderers cross paths often with humans. Startled, the insects quickly stand on their heads, their rears pointed at the sky, an imposing stunt that’s earned them the nickname “acrobat beetles.” They emit an unpleasant odor, which hasn’t stopped their use as living jewelry in Mexico, where aficionados tie strings around the beetles’ bodies and attach them to their clothing. TIP: I REALLY STINK The elegant red-and-black Harlequin bug has the look of a Bulgari brooch, but its glands exude a vapor that’s oh-so-obnoxious. These spotted beauties are so good at killing aphids that they’re the go-to alternative to pesticides. In late summer the beetles hightail it to the cooler canyons, where they gather in large swarms that defy description. Easily harvested in this communal setting, they’re transported back to civilization to work in suburban gardens. The name comes not from their canyon clubbing but from two dash marks that join on their thorax. The boom in backyard orchards here helps explain the presence of these pretty-as-a-jewel scarabs outside their native Arizona. The female lays her eggs in compost piles, where the larvae feast on the (not to them) rotten materials. The beetles’ flight is a drunkenlike zag as they move about in search of fruit—figs, peaches, apricots, nectarines, grapes—that they pierce with the shovel-shaped horn on their heads. They’re much beloved, and most people can identify the low fliers on sight as they waft through our neighborhoods. Monarchs arrive in the fall from throughout the west to winter in California, notably in eucalyptus groves on the Central Coast as well as in the Santa Monica Mountains and on the Palos Verdes Peninsula. They lay their eggs on milkweed, so environmentalists are crusading against aggressive weed clearance that’s threatening these butterfly nurseries. Pill bugs are crustaceans and get their name from what makes them a favorite with kids—the ability to roll into tight balls when frightened. Sow bugs, which are similar, can’t perform the maneuver and are also distinguishable by a prominent two-pronged tail. Pill bugs, which dine on dead plants, have a bitter taste, and few animals eat them. Despite a fierce appearance—like a six-legged gladiator—these crickets don’t bite or possess a stinger. They spend the bulk of their lives below the soil, so they’re most often spotted when picked up by a spade-wielding gardener (surprise!). They have a babylike cry and summon potential mates by drumming their bodies on the dirt. They’re also called potato bugs, likely because of the damage to root vegetables from their burrowing. Extraordinary mimicry is the hallmark of this family of flies, which resemble bees and wasps to the extent that they fool predators and experts alike. Recent immigrants to our backyards, the gorgeous stripe-eyed specimens are avid pollinators, as are their far more common cousins, drone flies. The latter seek out putrid environments like sewage for laying their eggs. Neither can sting, though their ferocious buzzing when trapped might suggest otherwise. TIP: DON’T SMACK ME! The purple-black cactus fly is a ringer for the female carpenter bee, whose sting packs a punch. But it wouldn’t hurt a fly.

The larvae of these strikingly patterned moths are commonly known as woolly bears for the stiff black hairs that cover them. Members of this family include the vestal tiger moth—white except for bright red forelegs—and the painted arachnis, whose wings and bodies are marked with wavy stripes. The caterpillars feed at night on weedy plants; pick them up and they curl into loose lumps. TIP: TOUCH ME! The woolly bear caterpillar familiar to folks from the east sports a red band around its middle. Protected under the federal Endangered Species Act, these butterflies brought development to a halt in their remaining habitat. The largest colony lives west of Los Angeles International Airport, and there are communities at the Chevron refinery and on a tiny patch of dunes at the beach in El Segundo. The larvae feed on buckwheat, which is losing ground to exotic vegetation, so restoration of the native plant has been encouraged. TIP: I’M ALMOST GONE The Palos Verdes blue butterfly was thought to be extinct until a minuscule number were discovered in San Pedro in 1994. Dragonflies are the jets of the insect world, and common green darners are one of the largest, with a body stretching three-and-a-quarter inches. Their agile maneuvers make them experts at snagging flies, though they can be distracted by a small stone tossed into the air, which they’ll pursue briefly. Green darners have also been seen attempting to lay eggs on cars whose colors make them look like ponds. The giants of the wasp world, they reach nearly two inches in length. The females’ sting is very painful but is normally directed at the just-as-intimidating tarantula, their preferred prey. The ensuing battle is Goliath versus Goliath, with the female stinging the spider on its underbelly and then dragging the paralyzed animal into a hole—at times the spider’s own burrow—where she lays her eggs in its body. ANTS ON PARADE
The Argentine variety of ant has shown no mercy to the natives and is now the country’s most common. This is the species that invades homes in early fall, when the water table is lowest, in search of liquid and other refreshment. Harvester ants, which are red and sting, still thrive in the desert—a habitat that’s too dry for the South Americans.

A year ago the Natural History Museum asked for the public’s help in an insect diversity study. Here’s what’s happening:

28
Households involved in the project maintain traps in their yards in an area that extends from downtown to Burbank.

77
Species of flies and bees were gathered in a single trap—the most in the study—at the base of the Verdugo Mountains. The least—14—were caught downtown.

33,000
Specimens of phorids were found in the traps over 12 Months. The gnatlike fly is attracted to decomposing material.

A well-traveled interloper makes its presence felt. Watch where you put your hand

Originally from South America and Africa, this relative newcomer to our city (it was first spotted in 2001) is rap-idly muscling out the black widow as the region’s dominant venomous spider. It has the telltale hour-glass marker but in a Caltrans orange. There’s good reason to be wary of this spider, which gravitates to cool, dark places like attics and crawl spaces: Its bite is several times more venomous than that of a rattlesnake.

That’s Mr. Bug To You! A Lesson in Vocabulary

INSECTSEven the experts use the terms “insect” and “bug” interchangeably for creatures that have three body parts, three pairs of legs, one pair of antennae, and a hard exoskeleton.
BUGSThe true bugs are insects that possess sucking mouthparts and include the pesky aphids and bedbugs.
SPIDERSThese invertebrates usually have eight legs, two body parts, and no antennae. The Buzz Goes On

The hive collapse that’s affecting honeybee populations is a tragedy, but it’s not the end of the world—despite beliefs to the contrary. There are 500 species of bees in L.A. County alone, along with hundreds of other insect varieties that pollinate flowers and trees. Honeybees are crucial in the commercial cultivation of stone fruits and nuts, which require systematic pollination that only the dense colonies can pull off. Nor will honeybees ever completely disappear; plenty of feral colonies exist that show no signs of collapsing.

Mistaken Identity
The harmless common crane fly looks much like a mosquito, for which it pays dearly at the hands of humans.
Tell Me No Lies
The American cockroach grows to only two inches in L.A. Its role in spreading disease is also exaggerated.
Fear and Loathing
The brown recluse spider—whose bite causes tissue necrosis—is not yet an L.A. resident.

Where Do Movies Get Their Insects? A Look Inside Bugs Are My Business