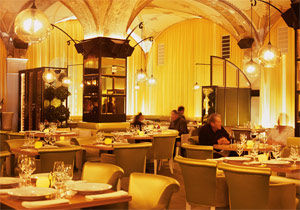 L.A. made Michel Richard. Not just in the sense that he gained his fame here. Rather, the city shaped him, was key to his becoming who he is today. Richard had bumped around from Paris to New York to Santa Fe as a pastry chef, and in 1977, when he came to L.A.—at the time hardly a town known for its restaurants—he opened a patisserie on Robertson Boulevard. But a restaurant seemed inevitable. He’d appear as guest chef at Robaire’s on La Brea and try out menus for friends several nights a week. Something fresh and inventive about his cooking called for a greater stage.

Richard opened Citrus in 1987. For a half decade after, it defined a new way of eating in the city. The all-white restaurant, with its curious mix of indoor parasols and open kitchen, stood against the very idea of a fancy joint. Instead of being secretive and dark, like so many grand restaurants, it was accessible and transparent. Richard was the perfect person to take California cuisine to its next phase. He didn’t share the Francophilia that marked the style. He’d grown up poor in the Ardennes and had no interest in giving a sun-kissed gloss to the food of his native country. Lacking a chef’s training, Richard didn’t have to unlearn the mother sauces, because he’d never learned them. His cooking was French in its rigor, but his inspiration was emphatically local. The menu at Citrus incorporated shredded phyllo dough Richard picked up in an Armenian grocery store in Hollywood, lemongrass discovered at the Bangkok Market up the street, and grated chayote squash he’d spotted his Salvadoran prep ladies having for lunch. This wasn’t merely California cuisine; it was the cooking of the intersection of Melrose and Citrus avenues.

I started working for Richard in the early ’90s. I was coming off four years of fixating on a novel that never jelled, and the Citrus kitchen was a lifeline to reality. The necessity for the beef cheeks to be in the oven by 9 a.m. was a huge change from polishing paragraphs that led nowhere. Richard’s energy permeated the place. Round, bearded, and jovial, he was the Friar Tuck of the restaurant world; everybody seemed to want him to stop by their table and would call ahead to find out if he would be in the kitchen. But by this time, he frequently wasn’t; Richard had started consulting with restaurants in Santa Barbara, San Francisco, and Washington, D.C., where he is now based. Between his conspicuous absence and a downturn in the local economy, Citrus was on its way out. The restaurant closed in 2001.

The recent opening of Citrus at Social represents a trajectory. Here we have a chef, in many people’s opinion the most original of his generation, back in the city that nurtured his talent. Not with a new venture but with a reincarnation of his old restaurant transplanted into Social, Jeffrey Chodorow’s nightclub-restaurant hodgepodge on Sunset. Richard is not the person he was when he left. He has been on the cover of Gourmet, won the James Beard Award for Outstanding Chef, authored one of those weighty coffee-table cookbooks. He returns in triumph.

Chodorow’s initial crack at refashioning the giant location, once the Hollywood Athletic Club, felt concept heavy. The Moorish suggestion given by the dramatic vaulted ceiling became a full-blown Casablanca knockoff. There weren’t enough Ricks in L.A. to fill the rooms. The new interior is an improvement—a glance around at the lime green banquettes and rounded booths places one in the domain of the hip and contemporary. The mural of citrus fruits lays the theme on a little thick, but the overall effect once you’re seated in the vast dining room is one of warm welcome.

What made Richard’s food unique at Citrus was its ability to shift our expectations. A shiitake napoleon with blanched garlic cream could make one question all manner of assumptions. This was no fey effort but a dish of meaty intensity whose crucial component seemed to be air. Richard never was much interested in gels and foams—probably because those transforming techniques seemed too obvious. He had the pride and unrelenting curiosity of a true creator. I was at Citrus when he went through a two-week eggnog phase, during which he tried to figure out how this liquid he’d found sold in quarts at the Pavilions on Vine could be reimagined. It couldn’t.

He’s carried this impish playfulness to Citrus at Social’s menu. The Mosaic Carpaccio of “Surf, Turf & Earth” is a brilliant interpretation of a carpaccio in which the vibrancy of the colors, the delicacy of the flavors, and the sheer ballsy originality of the whole give reason to smile. Chicken Faux Gras is an airy mousse covered with a pert layer of cucumber and parsley aspic. His Lobster “Begula” Pearls arrives in a small caviar tin, though the caviar is actually beads of Israeli couscous dyed with squid ink and laid over chunks of juicy lobster.

For all this inventiveness, there’s a frankness to much of the food that indicates a commitment to principles. A beet and tuna salad is a pithy dialogue between the colors, textures, and flavors of just two ingredients. Tartine Crab “Robaire” combines buttery brioche with buttery hollandaise and crab while nodding to Richard’s friend Robert Robaire, the restaurateur who gave him his break. Brought straight from under the flames after being browned, the appetizer sings. My favorite main courses have this kind of solidity. The moist, crisp tater tots elevate the roasted chicken. The wonderfully deep-flavored gigantes beans soothe the Colorado lamb with jalapeño sauce. The powerful mushroom sauce spooned under the rib eye steak will be so instantly recognizable to anyone who knew the original Citrus that it will seem like a conspiratorial wink from Richard himself.

The menu strives to have fun as it highlights Richard’s well-known creativity. But when the dish doesn’t work, the wordplay becomes annoying. Scallop Scramble “Not Eggsactly” is a mush of diced scallops. Cuttlefish Carbonara, timidly dressed ribbons of cuttlefish presented as if they were the classic fettuccine preparation, had me missing the texture of the pasta, not to mention the bacon and cream. Escargots in the Garden, a series of custardy ramekins with a thin coating of nut crumble, proves nothing so much as that snails and granola should never mix.

If the playfulness can seem forced at times on the menu, the desserts are more straightforward, revealing a remarkable finesse and certainty. The cheesecake is presented as an elegant sliver with a formfitting nougat crust. The Kit Kat Bar, a sleek rectangle with a crunchy base and a lush mousse topping dusted with cocoa, is a mature rendering of the standard found in a child’s Halloween pail. The classic vacherin, reconceived as a puffy mushroom of meringue filled with ice cream, is so precise in its craft and so mischievous in its charm that it could only be Michel Richard’s.

One of the first things you see when you sit down at the restaurant is Michel printed on the place setting. In fact, his signature is on the dessert menu as well, this time in the same lime green that covers the banquettes. As much as anything, it’s a symbol of the new restaurant world, in which some kind of sign or image is meant to make up for the celebrity chef’s physical absence. (Orange Crocs on the counter at Mozza are Mario Batali’s version of this.) People come to the restaurant looking to experience Richard’s legendary magic, and no doubt they’ll sample aspects of it. Yet the overall experience lacks something. That something is what happens when Richard bolts from the kitchen and is suddenly in the room.

It’s great to see such an ambitious restaurant on Sunset Boulevard. The service tries hard. Dishes like the Mosaic are spectacular. The ceiling alone is reason to go. However, Citrus was Citrus long before there was a Social. In resurrecting a storied name a few miles from where it ruled, Richard and Chodorow have opened themselves up to some basic questions: Are they being nostalgic? Do they intend to pick up where the old Citrus left off? Or are they simply branding?

If we decide that this is a restaurant that adopted its name to evoke past glory, we will reject it. That’s not an L.A. restaurant; it’s a Vegas restaurant that happens to be in L.A. But if Richard manages to engage with diners as a creator rather than as a star, allowing honestly that his new circumstances (he has two restaurants in D.C., one of which opened earlier this year) prevent him from overseeing daily operations, we will respond as we did the first time he stacked quadrants of crème brûlée between layers of sugar-lacquered crust. We were Richard’s earliest supporters, but we saw him too often in the flurry of creation to settle for his name on a plate.