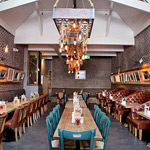 For all the success Gordon Ramsay has had in Hollywood, it’s never been with his own restaurants. His new pubby joint at the Grove is uncharacteristically casual for the Michelin-starred chef, whose menu showcases such items as a kale salad and fig-topped pizzas alongside spruced-up fish-and-chips and a lamb shepherd’s pie. It all pretty much works. A wedge salad doesn’t need its pecan topping, but we lapped up every last drop of dressing. Ramsay (or one of his chefs) labored long on that pizza crust, and it shows. Tuna tartare on romaine? Dated but delicious. The mystery, though, is how any self-respecting Brit can have a beer list that centers on Corona and Bud Light. » 189 The Grove Dr., 323-965-1020