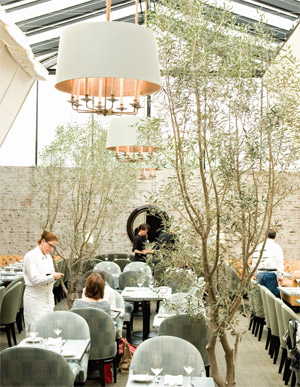 I’ve been a fan of Suzanne Goin and Caroline Styne for a long time. When people from out of town ask me where to eat, Lucques and A.O.C. are invariably on the shortlist. Each offers a form of discreet luxury unique to L.A. The quality of the food is assured; the service is casual but seamless. It’s as if the restaurants’ success derives from playing one level of dining against another. At Lucques, which opened in a tile-roofed carriage house on Melrose Avenue in 1998, they cross-pollinated formality with bare-beamed informality. At A.O.C., which followed five years later on 3rd Street, they did the opposite, goosing the relaxed notion of small-plates dining with details like leather banquettes and silver-plated water-bottle coasters and a wine list worthy of a grande maison. The restaurant built on Lucques without mimicking it, and I remember feeling a thrill the first time I walked in.

All I felt the first time I went to Tavern, their newest spot, was disappointment. Nothing worked that evening. Two glasses of wine at the bar while waiting for a table I’d reserved, and I was down 30 bucks before the meal even started. The service was pretentious (is it necessary to be told you’ve made a good choice when picking from the bread basket?), and the kitchen dispensed the food so slowly, it drained the evening of pleasure. Not that the food provided much: A breaded chicken in an earthenware dish was a leaden mess.

I couldn’t help thinking of Goin and Styne’s two other restaurants. Each bears a culinary moniker—Lucques is a variety of olive, and A.O.C. stands for the Appellation d’Origine Contrôlée laws regulating French wines, cheeses, and other foods—but both names were vague enough to allow the restaurants room to maneuver. With Tavern, which occupies a former Hamburger Hamlet in Brentwood, they took a term that is highly specific—a place with warmth, where the emphasis is on drinking and convivial dining—and applied it to a restaurant that doesn’t quite know what it wants to be. Tavern certainly seems welcoming and accessible, with customers kibitzing over coffee and pastries in a front section called the Larder, where refrigerated cases hold salads and various preparations available for takeout. But the restaurant gets more and more refined as you progress through its different sections. The middle room is both bar and dining hall. Painted battleship gray and decorated with high-backed wing chairs, it has an English air, as if modeled on a library at the Admiralty. A few steps away is a room where a greenhouse roof casts a soft light over whitewashed brick walls and tan leather banquettes and tables are lit by handsome sconces. It is a dramatic space, so dramatic that sitting anywhere else you know you’re in Siberia—a realm far from the wall-to-wall bouclé jackets and blogged-about Anna Wintour sightings. Tavern may not be clear in its mission, but it is clearly the most ambitious restaurant yet from Goin and Styne, who oversees the front of the house and the wine list. Expanding from West Hollywood and 3rd Street out past the great wall of traffic that the 405 represents, the pair have moved from the urban into the vaguely suburban. They have extended their hours (the Larder opens at 8 a.m.), and for the first time they are offering food to go. But more important, the playful embrace of disparate tones, the laid-back elegance that was so hard to pin down at the other two restaurants, now has a floor plan. Scattering the pixie dust here is going to be a lot harder to do.

Goin’s cooking has evolved over the years. It has always been purposeful, grounded, and wonderfully expressive, but it has become that rare thing for a California chef who is obsessed with maintaining the integrity of the ingredients: complex. It has shed its Mediterranean tag—which, let’s face it, is shorthand for southern France and Italy—and become Sephardic in its scope, with a sensational overlay of Pan-Arabic touches such as couscous, roasted nuts, and harissa, that spicy sauce of North Africa. In Goin’s finest dishes, the panorama is vast but the focus intense.

A lunchtime salad—a farro tabbouleh with beets, carrots, chickpeas, and feta—embodies her probing curiosity about the Middle Eastern table. It has the compression of elements, the interplay between the heft of the grain, the softness of the vegetables, and the moist base that suggest it all came from a well-nurtured stewpot of outstanding Levantine cooking. Fried chickpeas add a pert accent. Like Goin’s best dishes, it seems unconstructed yet is of course carefully thought-out. Lamb merguez with almonds on a bed of saffron couscous does the same trick, contrasting the meatiness of the sausage and the heat of the harissa with the satisfactions of the couscous and the spry sweetness of roasted apricots. These really are the pleasures of Goin’s approach: She has a wicked way of starting with the purity of earthy staples and ratcheting up flavors to create dishes you’d be lucky to find in a Marrakech or Aleppo souk.

Goin’s cooking can be classically formal—a trait hinted at by the understated stylishness that flits through all her restaurants. She’s never been one to just shove things in the wood-fired oven and be content with those primary flavors. For her, the creation of taste is an incremental process through which a chef’s talent is revealed. In the roasted asparagus with polenta, fried egg, and pecorino, breaking the yolk with your fork bathes the other ingredients, combining them into one. The corn bread under the pork chop is like a moist hasty pudding and provides the perfect foundation for the spiced maple syrup with which the pork is glazed. Grilled lamb, skewered on a rosemary branch, arrives over white beans with a feta salsa verde. This may be the most Goin-esque of dishes in that it subtly stokes the flavors: A garlic-anchovy paste is dosed into the jus like a gifted saucier might once have fed knobs of beurre d’Echiré into a Grand Veneur.

But it’s as if the demands of Tavern’s multitasking kitchen have weighed Goin down; too many dishes have a tone-deaf quality. The Angeleno sandwich is a dispiriting mass of burrata, artichokes, and stewed Tuscan cabbage heaped in a bread roll. It’s hard to believe that a chef with a sense of tradition could have produced such a dish. There is little reverence for technique in the mealy gnocchi that crown the otherwise excellent beef daube; the scattering of pan-tossed baby tomatoes brightens the sauce, but it’s not enough. Goin has been flirting with the classic repertoire for some time now. At Lucques she takes an age-old recipe for the rice-based sauce soubise, powers it with mustard grain, and spoons it over whole striped bass to brilliant effect. Things don’t work out so well at Tavern, where she refashions Poulets Grillés à la Diable into the Devil’s Chicken with leeks and mustard bread crumbs. The recipe, like the soubise, is spun from Julia Child’s Mastering the Art of French Cooking, a copy of which is on display in the Larder as, I gather, an homage. But where Child’s is a sprightly grilled dish, Goin’s is a misguided peasant remake. Plowing through the garnish of cooked-down leeks, rendered plaster-thick with bread crumbs, made me long for the zesty accompaniments of baked tomatoes and green beans that Child recommends. Goin neither stays true to the dish nor recasts it in a new form. What is new at Tavern is the formula. So now you can have Goin’s food on the Westside. And you can have it to go. And you can drop in for coffee at eight in the morning, too. Sorry, but that doesn’t represent the same sort of progress that one immediately detected at A.O.C. when it opened.

For me, the restaurant was at its best when I approached it casually. One afternoon, rather than deal with the usual salvo of reservations and reconfirmations required for the two dining rooms, I simply dropped by the Larder for a bite. The Pilgrim sandwich was all that the Angeleno had not been: culinary logic between two pieces of bread. The moistness of the roasted turkey was magnified by that of the stuffing; the tart sweetness of the cranberries did something devilish to the oven tones of the crisp sourdough crust. Together with a glass of organic English Aspall cider, I felt very much in a modern tavern. For dessert I had the bread pudding, a custardy wonder cut thick and generously from the pan. As in all of Goin’s restaurants, desserts are honest and restrained. The coupes—chocolate with espresso granita or blood orange with vanilla ice cream—have a becoming lightness. So does the elderflower panna cotta with citrus and prosecco sorbet. Ready to go: Tavern’s front room, aka the Larder

Behind glass in the open pastry department, a chocolate cake had been placed on a stand waiting to be iced. Peaches lay on a tray by the window, ripening in the sun. Outside on the pavement a group of well-maintained ladies prolonged their good-byes after a birthday luncheon. A steady stream of people placed orders at the counter. At a nearby table a young woman perused her laptop with a shoeless foot tucked under her on the banquette. She was at home. There was that delightful sense of many lives occurring simultaneously and of the restaurant playing a part in each. That’s what they’re trying to do here, I said to myself, and at last I understood what Tavern could be.