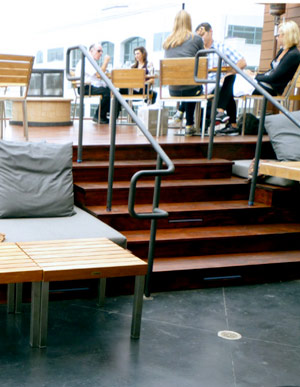 The name evokes a generic corporate wine bar, and that’s only half wrong. Occupying a prime ocean-view corner of Santa Monica Place’s dining deck, Sonoma Wine Garden comes from the team behind the mall’s Bay Area-based Ozumo. This, however, is a unique operation. There is a wine bar—sprawling and impressively crowded even on weekdays—as well as an oddly placed self-serve electronic dispenser. The thoughtful, eclectic list from sommelier Aaron Elliott (the London West Hollywood) is your first clue that this place isn’t what it seems. Your second is the menu from German-born Roman Petry, which features a jar of Austrian liptauer cheese, German butterball potatoes with parsley, and a pork chop with spaetzle alongside such Mediterranean offerings as pastas, pizzas, and charcuterie. The ethnic mishmash may not be  graceful, but it’s delicious. A Nutella-poppy seed streusel cake is indulgent in any language. » 395 Santa Monica Place (424-214-4560). L-D daily. Full bar. Mediterranean  $$$
Photograph courtesy sonomawinegarden.com