Home Uncategorized On the Corner 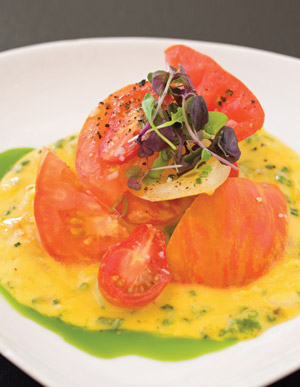 Nothing about Lot 1 would make you think it is ambitious. Ten undressed tables sit in a sparsely decorated room that looks out from a modest building onto the dense jumble of Echo Park. The open-galley kitchen recalls an old-fashioned diner; you half expect to see tickets clipped on an order wheel. The only hint that the restaurant sets its sights extraordinarily high is the quasi-monastic silence in which chef Josef Centeno and his one other cook toil. From his roost by the stove Centeno can see everyone who walks in, follow each order, and inspect each cleared plate.

The 34-year-old Texan has been slowly building his reputation in Southern California for six years. He worked at Aubergine, the pricey bijou in Newport Beach that specialized in tasting menus, before moving to Meson G, a short-lived nuevo tapas venture on Melrose. Then came Opus, where he brought a wide-ranging Mediterranean menu to the vast ground floor of the Wiltern Building. He’s done small and expensive, big and bustling. Compared with those highly decorated, heavily staffed operations, Lot 1 comes across as the starter restaurant that might have preceded them. Something about that setup is exciting. There may be little in the way of decor, but there are also no layers of management, no minions to do the chores, no hierarchy—nothing that gets between the talent and the food.

The name of the place comes from a 1907 surveyor’s map of the area, then called Sunset Boulevard Heights, which referred to the plot of land at the corner of Sunset and Laurel Terrace as Lot 1. The building’s owner, Eileen Leslie, lives upstairs, and when the appliance store that occupied the space closed, she decided that what the neighborhood needed was a good casual restaurant. Leslie is a trim, energetic woman who used to be a construction contractor; these days she supervises and helps out in the dining room. One evening, as she bused a sidewalk table, she explained that she had started the venture because she’d grown tired of having to go to Silver Lake for brunch.

The suggestion that it is a trek to go from Echo Park to Silver Lake, with nothing but a bend on Sunset Boulevard between them, is an amusing reminder of how minutely the differences between neighborhoods in Los Angeles are parsed. We simply won’t be lumped together. Carthay Circle keeps a patrician distance from the Miracle Mile, South Pasadena a pugnacious regard for San Marino. The bubbes of Fairfax going on their grocery rounds would sneer at the suggestion that where they lived is now called Grove Adjacent. That half of Santa Monica drives a German car with an Obama sticker doesn’t mean the neighborhoods north and south of Montana are united. In L.A. the soul of a neighborhood is monitored block by block.

There is no great visual distinction between Silver Lake and Echo Park. They share thickets of overgrown palms and a hilly terrain. At the right moment—oh, let’s be romantic and say dusk with a sky shot through with variegated shades of pink—the two neighborhoods embody the very best of the city. Silver Lake, with its boutique-filled hollows, offers something of an urban reprieve that Echo Park does not. In this sprawling neighborhood, floodlit on summer nights by the towers of Dodger Stadium, cultures are pressed together.

Alongside the jet of water at the center of the park that gives the area its name, both the jogger in the Williams College T-shirt and the ambling paletero shaving ice for children are at home. One could argue that a restaurant that serves English pea soup with poached egg, rhubarb, and toasted raisin bread points is another example of gentrification, a word that has come to mean displacement as much as improvement, but this new restaurant is saved from being branded as such by the uncompromising purpose it shares with the surrounding businesses. The botanica across the street sells religious articles. Nuvia’s makes pupusas to order. Barragan’s is a happy assemblage of plasma screens and margaritas. Meanwhile in the confines of Lot 1 Cafe, two cooks work the line.

Josef Centeno lives on the hill right behind Lot 1. As he watched the construction on the space, he was deep in negotiations to start a restaurant in Silver Lake. When that deal fell through, he licked his wounds and followed the trail from the phone number in the window of Lot 1 to a job ad Leslie had posted on Craigslist. They met on a Saturday; the restaurant opened the next. So much for market studies.

Since graduating from the Culinary Institute of America, Centeno has come up through “brigade” kitchens, where either young cooks are being told what to do or chefs are telling others what to do for them. One of his first big jobs was at Les Célébrités in the Essex House on Central Park South, but his love of cooking was sparked while slinging cheese steaks as a student at the University of Texas at Austin. He might never have expected to land in a joint like Lot 1, but for Centeno, working under such austere conditions is a chance to strip away what is extraneous, rediscover what is important, perhaps even see something new. The modest venue might well be where, without the pressure of ownership, he can articulate what he has to say.

Centeno’s style is progressive, assured, and ever so slightly shaded toward Spanish ingredients. Paradoxically, because his approach is so broadly focused, it is grounded in tradition and craft more than in any particular region. The selection of little jars of terrines offered under the “Share” rubric on the menu shows how attached he is to time-honored principles. The pork rillettes have a wondrous spreadability. The pulled meat is lent an acidic charge by a saucer of pickled beans. The luxuriousness of the chicken liver and foie gras mousse is magnified by the addition of brandy. If you don’t finish it, you can take the container home for an additional $5.

Another lodestar for Centeno is a deep understanding of American cooking: Its distrust of showiness suffuses everything from the popovers with a thatch of grated cheese to the summer bean salad with shaved egg. The thickened vinaigrette—so close to a mayonnaise—nods to something Mom might have packed in Tupperware for you, but if she’d added the brioche croutons and roasted walnut crumbs, you would have been a very fortunate kid indeed. Native delight similarly glows in the buttermilk-fried quail, which combines the crunch of the golden light batter with the floral undertones of tarragon delivered in a vinegar-amped sauce.

Throughout the menu one senses the importance of detail to Centeno. You could say that about any good chef, but in a restaurant with two guys and a dishwasher in the kitchen, this quality is given a certain immediacy. If something is on the plate here, it is because the effort, energy, and time involved were deemed worth it. Those toasted raisin bread points, when paired with the poached egg yolk, bring a wonderful hominess to the vibrant English pea soup. The fresh hearts of palm are sliced thin, while the accompanying radicchio and leaf parsley are torn, which helps maintain the distinctiveness—the role, really—of each ingredient. The moist cream of wheat sets off the spoon-soft pot roast. The shot of vinegar in the pan juices of the roasted chicken tone down the garnish of sliced strawberries. Temperature, texture, contrast, technique—these are the underpinnings of Josef Centeno’s mature approach.

When he turns to Spain, it is a country’s cooking viewed through an emotional prism. Just-rendered chicharrones bob in a bowl of gazpacho. A magnificent salmorejo sauce—all hand-pounded tomatoes, bread, and garlic—provides a lusty foundation for the appetizer of escabeche of chicken and pork jowl. Only once does Centeno’s touch fail him, and it is notable because the parts are so unintegrated. The crispy pork belly is not crisp; the wisdom of mixing morcilla, a Spanish blood sausage, into the potato puree is questionable; and the endive that the preparation sits on is ridiculously oversalted. More than once I’ve found Centeno’s seasoning to be heavy-handed. I think he is doing destination-restaurant seasoning, where the chef can’t run the risk of the food not registering on the diner’s palate. Centeno is going to have to adapt. A neighborhood restaurant is something people might go to every week. It’s hard enough to eat like this occasionally, impossible to do so regularly.

Leslie visualized the restaurant as a brunch spot, but she lucked out and got a chef capable of much more.Together they have plans: They’ll probably institute that brunch, they’ve started lunch, they’re going to do a tasting menu once a week, and they will eventually get a liquor license, which will add immensely to the experience. This, then, is a review of a work in progress. But it is also a review of something fleeting, because Josef Centeno will have that longed-for restaurant of his own one day. For now he is searching for what is essential in his cooking in a ten-table spot on a jam-packed sidewalk on Sunset Boulevard.

Already one achievement is clear: This restaurant has found its place in the neighborhood. You can feel it at night as the street hums with intensity. The barbers in the unisex salon are doing the last cuts; a line is forming at the zinc counter of Patra’s charbroiled-burger stand. At Lot 1 Cafe some have reached dessert. They crack through the golden sheath on the tapioca brûlée; they revel in the billowing rice pudding, its caramel-painted surface reminiscent of the instant in a Vermont winter when a ladle of boiling maple syrup is splashed onto clean snow, ready to be eaten. No, this is not what the pupusas at Nuvia’s or the margarita blenders at Barragan’s or the paleteros of Echo Park offer, but like them, it does constitute an authentic moment of delight that fits right in.