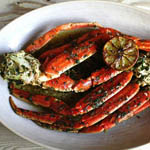 One of the earliest L.A. food movements of 2013 is the upscale, East Coast-style seafood shack. The first to showcase this trend is Jason Travi, who has been off our radar since his acclaimed stint at the now-shuttered Fraîche in Culver City. In a bafflingly bedecked dining room that resembles an overwrought wing of the Pacific Design Center, Travi salutes the sea and also swine. Oyster sliders, snow crab legs, and a superior clam chowder team with maple ham, fried nuggets of head cheese, and diaphanous pork rinds imbued with malt vinegar. Smoke is another theme, with applewood fumes flavoring everything from brisket (OK) to sturgeon (outstanding). Cocktails from Chicago bar legend Dino Balocchi go down swimmingly. » 1600 Wilcox Ave., 323-465-3675 or littleforkla.com.