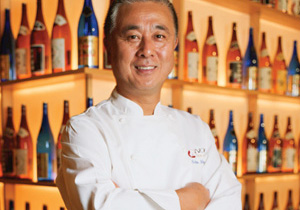 After years of stately calm, upper La Cienega feels reinvigorated. Limos are lined up in front of Koi. STK, the New York steak house in the old Alto Palato space, is jumping. A mariachi trio strums “Noche de Ronda” by the Spanish Kitchen’s door. Cypresses are silhouetted against the deep blue evening sky as a stubbly-faced man emerges from his Aston Martin. The traffic barrels down from Santa Monica Boulevard like small boats riding the rapids.

It is here that Nobu, the celebrated multinational sushi restaurant, has landed. With all the surrounding atmospherics, arrival at the restaurant has a certain place-specific charm. Standing on the curb provides one of those satisfying moments in which the idea of the city and the reality of the city are the same. But I have also felt a twinge of hesitation before taking that first step into the restaurant. It is an exalted name, an institution that created a new sushi prototype when the original opened in New York’s TriBeCa in 1994. That Nobu was neither a neighborhood spot nor a haute sushi temple. David Rockwell’s design, featuring a copse of silver-barked trees and walls of river stone, alluded to something ancestral, but the media-stoked buzz was thoroughly modern. (Having Robert De Niro as a backer didn’t hurt.) Nobuyuki Matsuhisa had a fresh, inquisitive understanding of sushi that never compromised excellence for the sake of originality. By 1997, a second Nobu had opened in London. Since then, the brand has been steadily extending its reach. Today Nobu has outposts in Dallas and San Diego, Aspen and Melbourne. It is the jewel in the crown of Drew Nieporent’s Myriad Restaurant Group.

Nobu Los Angeles is not, however, another venture from a chef who has nothing to do with L.A. Nobuyuki Matsuhisa’s moving into the old L’Orangerie space isn’t akin to Laurent Tourondel’s moving into the old Le Dôme. The latter is a case of a chef whose expansion plan includes the West Coast, while the former is a homecoming. After all, the restaurant that gave rise to Nobu opened on La Cienega some blocks south in 1987. Nobu sprang from Matsuhisa like Athena from Zeus’s forehead. But Matsuhisa was a far more modest restaurant, one whose interior resembled Schwab’s outfitted by early Armani. Rather than a soda fountain, tacky carpeting and a row of counter stools fill the space. Matsuhisa was where you ordered toro with the confidence of someone who’d just figured out that it was the finest-grade tuna belly and not Spanish for “bull.”

An entire philosophy of sushi can be traced back to the style Nobuyuki Matsuhisa perfected there. The years he spent running restaurants in Peru and Argentina had exposed him to other ways of serving raw fish that were less austere than what he had learned in Japan. That period became the genesis for the food at his L.A. restaurant. Tartare—normally composed of loose fillet ends chopped and buried in a hand roll—was suddenly topped with caviar. Humble ingredients such as pickled vegetables were downplayed, while lobster was highlighted. How the rice was cooked—for traditionalists the building block of quality—never seemed to be a big deal. Instead, Matsuhisa fearlessly explored acidity and chile heat and what they did to raw fish. For him, the joyfulness of a ceviche was always bubbling under his best creations at Matsuhisa. In fact, it still does, and that’s a bit of a problem. Nobu is at 903 North La Cienega Boulevard, Matsuhisa at 129 North La Cienega. They don’t even have Wilshire Boulevard between them. I wonder if this doesn’t create some confusion for Angelenos. It’s one thing to branch out to Dallas and quite another to return to your roots. The danger is that Nobu could be perceived as little more than a splashy version of a restaurant we already have.

Technically there has been a Nobu in Malibu since 1999. I say technically because culinarily, what happens in Malibu stays in Malibu. Indeed, that particular Nobu, owned by different backers and middling in quality, has had no impact on the L.A. sushi scene. For all intents and purposes, the West Hollywood location is the first Nobu in L.A. One need only walk in to appreciate the ambitions of Rockwell’s design. Gone is any hint of L’Orangerie, the Gallic palace that had occupied the space for 29 years before closing in 2006. Red and black dominate the warren of high-ceilinged, moodily lit rooms. Rockwell’s aesthetic for the original Nobu was part of the restaurant’s success. Although Nobu Los Angeles has nice details—raised Keith Haring-esque curlicues on the banquettes and partitions formed from interwoven reeds—the overall effect is unimpressive. The layout is clunky—the tables in the main dining room are clearly the best, while those in the other rooms feel lost in the hinterlands—and the opium den palette (also used at Koi, the hip sushi boîte across the street) seems overfamiliar.

Those shortcomings, however, don’t diminish the animation inside. The rooms are packed, the crowd energized. A few knowledgeable fressers, girlfriends out for a night on the tiles, young expense account executives pouring out high-ticket sakes—they’ve all come to experience a truly identifiable brand of sushi. What Nobuyuki Matsuhisa did was knock the starch out of the whole noble I-am-a-dignified-craftsman approach without dumbing down the food. His was a new form of subtlety, underscoring elements that until that point had only been suggested. There is a world of difference between dabbing a schmear of wasabi under yellowtail and laying a lozenge of jalapeño above it, between giving a spritz of lemon juice and allowing a yuzu-lemon juice mixture to act as an instant marinade. When abused, the formula could be reduced to “hit it with heat, douse it with yuzu,” but that this never occurred under Matsuhisa only proves that his groundbreaking originality was predicated on restraint.

At Nobu, as at Matsuhisa, I like to start with sushi, particularly the silverfish, because it sets a benchmark of flavor. Tuna, even salmon, seems too lush to serve as a preamble for what is to follow. On the other hand, kohada, or gizzard shad, has the clean, bright zing of an anchovy, and saba, or mackerel, a forthrightness that offers just the right way to enter the fray. Ordering at Matsuhisa has always required going back and forth between the menu and the white board scrawled with specials. Losing that board seems to be necessary in sushi restaurants that reach a level of acclaim. Katsu-ya in the Valley lost its board in the transition to the Katsuya in Brentwood. Matsuhisa lost its board jammed with tiraditos and other specials when it became Nobu. I miss it. The implication of the board was that something great had arrived that morning, and the chefs were stoked about what they could do with it. Those humble white boards are a sushi joint’s direct link to the sea.

Still, the classics are all here, displaying a wonderful mastery of detail. With the “new- style sashimi,” as the menu calls it, the thinly cut flesh is laid on a sheet tray, flashed in the oven, and plated with olive oil and toasted sesame seeds. The fish is pallid at the edges, the temperature suspended between hot and cold. The texture of the sauce isn’t quite brothy, but it’s so good I invariably ask for a spoon to eat it up. The tiradito is one of the preparations that made Matsuhisa’s fame. Its inspiration is the Peruvian raw fish dish. In his hands it becomes a study in fiery understatement, where the fleck of salt, the leaf of cilantro, and the dot of rocotto, a Peruvian hot sauce, augment the pristine aspect of the fish. No doubt the successes on the menu far outnumber the failures. The miniature tacos, with tuna or crabmeat, are spiked with salsa and pack a briny punch. The black cod with miso, one of Nobuyuki Matsuhisa’s most copied creations, defies the odds: It could so easily be done by rote, yet the miso lacquering the fish with gamy sweetness has retained the integrity of an original. There’s probably a three-minute window when this dish is perfection, and the staff are adept at getting it out fast.

The items that don’t work are equally interesting because they reveal the subtlety behind this cooking and what happens when it goes. I’ve never been a fan of the miso powder he dusts on scallops. Used on the whitefish at Nobu, it pushes aside the other flavors. In a lobster special offered one night, the moist chunks of meat were buried under a half inch of soggy bread crumbs. The $55 price tag hardly improved it. If the tiradito represents the joys of interpreting another culture’s food, the fish-and-chips points to the hazards of doing so. Without a great batter, that magical hint of grease, and the liberal use of malt vinegar and salt, Nobu’s rendition is at best a genteel tempura, not the sort of food you’d wolf down while buzzed on beer after your local pub has closed.

Nobu has excellent desserts made by pastry chef Gabriele Riva. The Suntory whiskey iced cappuccino crowns a coffee bean-studded cocoa crumble with whiskey foam. Froyo is something like a yogurt sandwich in a delicate black sesame sheath. Even the proverbial molten chocolate cake is lent a pert immediacy with a scoop of green tea ice cream that really tastes of green tea.