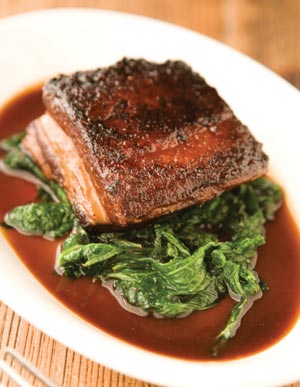 Of the three friends polishing off a bottle of albariño around the fire pit at Gjelina, it was the young man pouring the wine who had perfected the bohemian look. His friends made do with loud plaid shirts, but he was a study in gray, from the notched-lapel waistcoat to the loose pants drawn tight with a club tie. Behind these three were two elderly couples who sat down cautiously, passed around a lit magnifying glass to read the menu, and asked the patient waiter about everything listed—not the manner in which the chef prepared the hanger steak and the farro risotto and the burrata but what the heck it was. One of the ladies, catching my inquisitive gaze, offered a what-can-you-do shrug. “This place is always full,” she said, “so we’re giving it a try.”

Dinner out can be a trip into the communal, a glimpse of what others are eating and how they are framing their times. In some establishments, for the price of an appetizer and an entrée, you get to feel the city’s pulse. Go without a reservation to Gjelina, and you are likely to bide your time leaning against a wall waiting for a slot to open as diners splash out the Croatian red and share plates of octopus. Low-key moneyed Venice flocks to the corner spot, which has been overflowing since it opened in July. The reasons are many. The design is refreshing, a Bauhaus take on the Tyrolean lodge, and the waiters are efficient yet relaxed enough to suggest they are all friends in a band.

The cooking of Travis Lett is the main draw, though. Only 30 years old, he has developed a remarkably sustained culinary style: From the first charred brussels sprouts with pancetta to the concluding honey-tinged pine nut tart, the selection represents a whole. Lett’s previous position was as chef at NineThirty, the dining room that is but an annex to Rande Gerber’s runway-size bar at the W hotel in Westwood. The cuisine was more ambitious than the location required, but it signaled Lett’s deep attachment to an earthy brand of cooking. I don’t imagine that his food has changed much; instead what has happened is that, in the proper setting, he has come into his own on Venice’s Abbot Kinney Boulevard.

Though the coastal city is anything but homogeneous—a neighborhood that tatted throttle jockeys and cashmere-sheathed art directors call home—locals are united in their slightly disdainful regard for commercialism. Venice, Italy, might have the Hotel Gritti Palace; Venice, California, has always been content to just have grit. Each business opening, whether a design loft or a furniture store selling weathered Adirondacks, is scrutinized for its potential to add to or detract from the sense of place. In other parts of L.A. it would not necessarily be so, but on Abbot Kinney a restaurant that has a tongue twister for a name (pronounced without the g, it belongs to owner Fran Camaj’s mother), carries no sign, and looks constructed from rail ties fits right in.

With its broad wooden counters and wrought-iron inside and its yard sale furniture amid stone bulwarks in the courtyard (a particularly pleasant seating area), the space has an appealing frankness. A clever mix of the rough-hewn and the polished, it provides an ideal stage for Lett. He happened into the trade as an art student at the University of Colorado at Boulder. A self-taught chef, Lett had already worked at several high-volume Italian restaurants before he embraced cooking as his profession, and you can see aspects of that background in his approach at Gjelina. The menu he has devised is strategically thought-out, with many of the ingredients capable of being used in a variety of ways. This is intelligent cooking. The grilled radicchio is served by itself with aged balsamic and shows up as well with bacon and fontina on pizza. Squash and farro are combined in a soup full of peasant goodness, and they’re also in the risotto, a wondrous base for the braised lamb shank.

An absolutist when it comes to seasonal produce, Lett goes to a lot of trouble to get his ingredients at the farmers’ market. Then he draws out something fundamental from them with a technique that is discreet to the point of being self-effacing. The wood-roasted butternut and kabocha squash—with rosemary, char, sea salt, and a nutty olive oil—is the apotheosis of this, but I’ve found examples in each of the menu’s six sections (not just small plates but charcuterie, not just salads but main courses). I adore (as do my kids) the margherita pizza, which, yes, is a weightless “gastronomic” pie, but with little more than tomato sauce and cheese, it has a restraint that carries a hint of nostalgia. (With some margheritas, two ingredients form just the first layer.) Roasted brandade, packed with salt cod nuggets, its creamy surface glazed by the citrus-wood fire, is primordially intense when heaped on grilled country bread.

Back when he was starting out, Lett had an epiphany while eating a meal at Mario Batali’s breakout restaurant, Babbo, shortly after it opened in Greenwich Village. “It wasn’t one thing they did. It was how they did everything,” he recalls of the food’s exacting forthrightness. The verbiage used to describe culinary styles these days, whether French or Italian or one that mines a parish on the Mediterranean, could be significantly reduced by referring to this confidently rustic cooking that bypasses borders like an EU dignitary as “post-Babbo.” It’s a philosophy that invests great faith in the defining power of sea salt and good olive oil. Lett’s cooking embodies the basic integrity of this method, ratcheting up its effect with his devotion to the open flame.

Even when he departs from the hearth, Lett is able to underscore individuality by combining ingredients. The sunchoke, sliced thin, almost like poor man’s truffle, and paired with escarole and preserved lemon, is a salad that exemplifies the shading one vegetable can bring out in another. The lentil and rocket salad, on the other hand, shows where this M.O. can go wrong; the components seem randomly selected. The larger pitfall in Lett’s technique, however, is that his strategic use of key ingredients at times obliterates the individuality he so prizes. Kale and its cabbagey friends are all over the menu. With the grilled hanger steak, such greens are essential to the dish’s success; flecked with chili and sliced garlic, they accentuate the meat and its smoked tomato butter. But when they show up in the duck confit, grilled branzino, and pork belly, the vegetables no longer have specificity. In the jidori chicken, the leafy foundation only adds the taste of boiled cabbage. We’ve all known those menus that seem to swim in cream. When I close my eyes and think of Gjelina’s current menu, I see lots of dark green.

Open long hours, seven days a week, Gjelina has the feeling of an urban oasis for locals who can drop in almost anytime. Still, during the week, in the period between 3, when lunch ends, and 5:30, when dinner starts, I wonder whether the staff has pause enough to regroup and relaunch. At times, during the late-night crush, char has become burn and once-pristine flavors have become muddy. Those hours also affect the service. On the weekend, brunch eases into dinner; food is served from 10:30 a.m. until midnight. Without that “show time” moment, when the operation goes from being ruled by an atmosphere of quiet preparation to turning into a public space, energy can fall flat. How can anyone be animated by the arrival of customers if customers are always there?