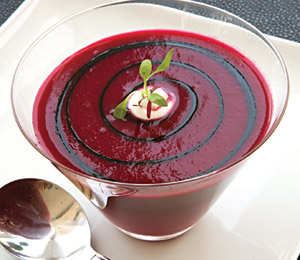 The latest version of Petrossian has changed all that. Earlier this year the spot underwent a total remodel, and with the new design came a transformation. The location has been expanded (what was formerly an office is part of the dining room) and brightened (large plate-glass windows frame Robertson). The cloistered aspect of the space has become—this sounds strange for a restaurant—public. Silvery Old Hollywood portraits dot the walls. Bone white tulle curtains, gathered with silk bows, glow in the sunlight. A blistered dark material covers tables and menus, playing off the appearance of close-packed beluga caviar. On the far side of the room stand refrigerated cases that are stocked with foie gras terrines, chocolates, and a selection of Petrossian tins bearing the company’s famous schooner label. There isn’t exactly a brick of halvah resting on the countertop, but the place does feel a bit like a good deli.

On a recent day I sat at a window table, gazing past the geranium-filled planters that line the restaurant’s trim terrace. Throw in a few more customers beyond the eight who were there, and I could have been in Paris. But I was too busy to notice. I was scarfing down a hand-cut steak tartare, the strong flavors of shallots, capers, and Worcestershire sauce amped and at the same time tempered by a thin middle layer of domestic roe. The dish was an epiphany. As black and discreet as a tuxedo’s silk shawl collar, caviar for me had always carried a hint of Bondian intrigue. But I was no snifter-wielding Mr. Bond; I was coupon-clipping Mr. Kuh. For the first time I engaged with it as a food. I had never understood how this legendary ingredient could interact with others, drawing on their attributes to define its own. Now I did, and the scope of the transformation hit home. In some remodels a mural or grand old piece of woodwork is uncovered; at Petrossian, caviar itself has been revealed.

The chef who takes on caviar as a theme has to cook with clashing goals. His food shouldn’t steal the spotlight from the roe but rather complement it in tone. It has to be polished but not uptight, as forthright as caviar—and as refined. In Benjamin Bailly, a 27-year-old Frenchman, Petrossian has found the ideal candidate. Along with serving an apprenticeship at Spoon, Alain Ducasse’s Saint-Tropez restaurant, he has helped with many openings in the Joël Robuchon empire, including the L’Ateliers in Monaco, Paris, Tokyo, and Las Vegas.

If there’s a style that Robuchon has made his own, it is the way he limns France’s rustic traditions and rituals and imbues them with ethereal “haute” characteristics. Potatoes, for example, have been an idée fixe of his since he was an unsung hotel chef in the late 1970s. His pommes purée is considered the holy grail of mashed potatoes. But he hasn’t left taters there. For decades he has cooked them in duck fat, braised them in chicken stock, and adorned them with mushrooms, as if in this ingredient he has found the vehicle to marry French panache with the nation’s peasant soul.

You need search no further for clues of Bailly’s pedigreed training than in the soups. The vegetables that compose them are so smooth, they seem as if they have been passed several times through a fine screen. In true Robuchonian manner they combine an airy élan with an almost atavistic understanding of the satisfactions of a soup. Crowned with tiny croutons and finely chopped herbs, the mushroom cappuccino is gossamer-like. The cold borscht is singular. More Left Bank chic than Slavic standard, it is punctuated with a dab of sour cream and a swirl of balsamic. Many of the best dishes Bailly produces at Petrossian share this hard-won breeziness. He makes a luscious foie gras crème brûlée, topping it with fig marmalade that joins with the crackling burnt-sugar crust to magnify the note of goose liver. Calamari a la plancha are dry seared and sprinkled with minuscule cubes of chorizo to bring out their full flavor. Halibut brandade (he now makes it with sturgeon) is a phenomenal reinvention of a dish that is traditionally made with salt cod. Cooked slowly and whipped into a hash with potatoes and piquillo peppers, then crowned with a sunny-side-up egg, it displays a breathtaking command.The dessert of vanilla panna cotta with white peach espuma has a lightness to it, too, the just off-sweet froth echoing the tulle window dressings. I can do without the caviar smidgen that one may choose to have plopped on top (for an additional $6); if you’ve had any caviar already during the meal, your taste buds will be so saturated, the dollop here will seem superfluous at best and mismatched at worst. The Sicilian pistachio crème brûlée and the piña colada gelée provide a more pleasing clean taste on which to end a meal.

The Petrossian name has been synonymous with caviar since Melkoum and Mouchegh Petrossian, two displaced Armenian brothers in Paris, secured an early shipment of caviar from the nascent Soviet Union in the 1920s. The company is also regarded for its smoked salmon. Petrossian’s smoking process is particularly long, resulting in salmon that is supremely lush and without any trace of oiliness. Bailly does a good job showcasing the fish, lending it contemporary shading in a wrap with avocado, green apple, and tzatziki. The smoked salmon mille-feuille, on the other hand, fails utterly. A dish named for puff pastry’s “thousand leaves” should not be three bland layers of smoked fish interspersed with cold, crushed potatoes. Another curious misstep, given the heritage that Bailly mines, is the croque monsieur, the classic toasted ham and cheese sandwich, which here is sheathed in lumpy béchamel. Bailly seems uninterested in delving into possible improvements or even meeting the standard set by any decent French café.

The service at Petrossian is relaxed and understated, which is exactly what it should be in a restaurant that offers $750 servings of caviar but doesn’t want to scare off the many customers who won’t be shelling out that kind of money. Any whiff of the ceremonial pomp that we expect, and we’ll freeze up, wondering what we’re doing here. The light-filled interior and low-key demeanor of Petrossian in fact reflect the recent change of course in the trade, which has had to respond to concerns about the overfishing of sturgeon in the Caspian. Fittingly, the biggest seller at Petrossian is the caviar of American Acipenser transmontanous (it was once found in the Delaware and Columbia rivers—hence cross-mountains), which is commercially farmed near Sacramento. Armen Petrossian, the son of Mouchegh and the family patriarch, maintains that the future of caviar lies in aquaculture. Indeed, in the new caviar universe the country of origin is far less decisive a factor than the species of fish from which the eggs are harvested and the skill of the people who age them: To eliminate the milkiness of fresh caviar, the tins must be turned intermittently to redistribute the oils while being allowed to sit for several months. The people selling the stuff on eBay can’t assure you they’ve done that.

Perhaps in the shift to domestic farming, caviar has lost some of its image; that’s fine—it no longer need be a plutocrat’s delight. Which isn’t to say it has lost its edge. What we are able to enjoy today is something akin to caviar without guilt. Opening a 500-gram tin of osetra will always be as grand a gesture as uncorking a magnum of ’47 Cheval-Blanc. But there is also caviar in a minor key. My favorite dish at Petrossian is a 12-gram serving of a domestic farm-raised variety, served in an iced présentoir—with all the fixings and gorgeous mother-of pearl spoons—that costs $24. I love the small salad of warm fingerlings that Petrossian serves on the side. Like the diced red onion that can be requested, the basic, earthbound nature of these foods forces the caviar to rise to the challenge and impose its matchless concentration. For the price of two cocktails at some new bar, you can get not only a lot of elegance but the ineffable pleasure of caviar’s iodic rush.