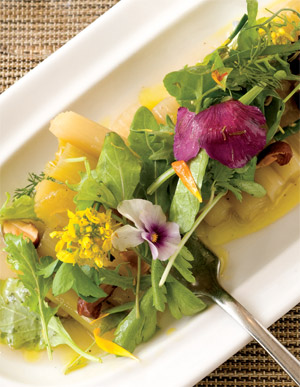 Tom Colicchio may be, flat out, the most influential chef in the country. That deep sear, that long braise, the unfussy presentation, and especially the way ingredient and technique subvert inspiration—these all derive from him. This purity doesn’t come cheap; it depends on the finest sourcing, which means his food has always been fabulously expensive. But the bucolic engineering in which he excels—nature’s bounty brought to perfection by culinary craft—rests on solid beliefs. It is a cooking of conviction, impervious to trends.

Well, trends are one thing and economic Armageddon is another. Century City, the location to which Colicchio brought Craft in 2007, now feels like a Roman outpost the Huns just sacked. The AIG tower on the corner of Avenue of the Stars and Constellation Boulevard, catty-corner from the restaurant, doesn’t dare illuminate its sign. Bear Stearns, the next building down, has its corporate logo out front but doesn’t exist anymore. Even the CAA crowd, whose BlackBerrys once buzzed merrily throughout expense account meals in the Craft dining room, has scaled back. They haven’t only cut out the carbs; they’ve cut the protein, too. As a direct result of these conditions, Colicchio reconceived Craft and in March launched Craftbar, using the front seating area and the spacious terrace for what is more than an annex but less than a second restaurant.

There are already a Craft and Craftbar in New York. The first opened in 2001, the second in 2002. Although they are nestled in the Flatiron District, they are separate entities, divided by bustle and traffic, so they can exist as separate ideas, catering to distinct needs. Putting them under one roof here, of course, is a function of the economy. It seems like right now every restaurant in Los Angeles is adapting to the times. My in-box is flooded with press releases about bargain prix fixe offerings and the consolations of reasonably priced comfort food—anyone with a brain is cutting back. At Craft, though, the development has more implications than it might have at other restaurants. Colicchio’s style is an all-or-nothing proposition. It is constructed on the twin absolutes of pristine quality and labor-intensive skill, so saving on either threatens the entire edifice. At least that’s what I thought until I started eating at Craftbar.

In 2007, when Colicchio opened Craft in a low-slung modernist structure directly below CAA, nothing seemed quite right. The screen of reedy saplings that surrounded the terrace—that unneighborly property marker that blights much of the city—gave it the look not of the institution it hoped to become but the satellite it was. The day-to-day mechanics were off as well. The place had barely opened, and the waitstaff already appeared worn down from hauling the cast-iron casseroles that much of the food is served in. The saplings are now grown in, and that no-man’s-land of a terrace is filled with people delighting in chicken wings tossed in Tabasco butter. The staff seems galvanized to be offering Colicchian food at modest prices—most dishes hover around $8—while the artistry of the chefs who run the kitchen daily has been revealed. They’re no longer just reproducing a proven style; they’re cooking. In short, the addition of Craftbar has transformed Craft from being another restaurant rolled out by a celebrated and distant chef to a restaurant that is a part of L.A.

Colicchio has long displayed a contrarian side. When he became the talk of Manhattan with Gramercy Tavern, he still gave the impression that on days off he might be found at a Devils game. His breakthrough book, Think Like a Chef, published in 2000, seemed like the no-nonsense partner to Jacques Pépin’s acclaimed 1976 book La Technique. Both focused on fundamentals. La Technique was geared to a nation newly excited about tasting chèvre, Think Like a Chef to people who were unable to face a weekend without a visit to a farmer’s market. From the name of his restaurant to his role as head judge on Top Chef, a hard-won integrity runs through much of what he does—he is continually returning to first principles—and I can think of no better example than not putting his name on the Craftbar menu but instead listing that of chef de cuisine Matthew Accarrino.

Thirty-one years old, Accarrino has worked for Charlie Palmer, Todd English, and Rick Moonen. He toiled as sous-chef at Thomas Keller’s Per Se for two years before coming west to launch Craft. This guy could easily be running his own restaurant, and with Craftbar, in a way he is. Craft, after all, must always be Craft, an unsullied dialogue between man and fire. At Craftbar, though, the dialogue is not with any primal element but with a walk-in fridge. The thinking of the chef is, What have we got here, and what are we going to do with it? Each day features a different menu, so the spicy chicken wings may not be offered at the same time as the suckling pig with black garlic sauce. The fried anchovies with Old Bay aioli may not appear on the menu with the ethereal smoked bacon and Maine lobster roll (its surface brushed with clarified butter).

Probably the greatest surprise of Craftbar is the uncompromising subtlety that arcs over the eight sections of the one-page menu, uniting dishes that are intended as bar food (such as strips of fried portobello and truffle aioli) with dishes that could serve as miniature main courses (such as lamb belly with chioggia beets on a base of dates and sumac-flavored yogurt). At times the grace note is almost invisible: A microthin layer of cornichon gelée caps the creamy pork rillettes. At other times Accarrino can be more showy. Wild greens, lemon confit, and roasted hazelnuts provide a level of complexity in the short rib ravioli, which could otherwise be earnestly bland. That the whole thing costs $9 is terrific; that it surely started out as short ribs that didn’t sell next door is brilliant.

The other talent responsible for the restaurant’s resurgence is 29-year-old pastry chef Catherine Schimenti, who has also been at Craft since it opened. Like Accarrino she has a top-notch New York résumé, which includes positions at wd-50, Gramercy Tavern, and Per Se. The make-do ethos of Craftbar—in which generosity must be produced without expense and the ideal must give way to improvisation—is embodied in Schimenti’s desserts. The butterscotch panna cotta is crowned with green apple ice, and it really is ice, not granité, frozen in a sheet and chopped into what looks like a king’s ransom of emeralds. Schimenti possesses not only flair but—and this is much rarer—perfect pitch: She knows exactly what the occasion demands. Rather than the statement dessert that would be a jarring conclusion to the meal, her creations are playful, even a little nostalgic. Chocolate hazelnut spread ac-companies slices of grilled homemade raisin bread. The marshmallow cream that tops the vanilla bean parfait is an homage to the ice cream fluff served at Friendly’s, an East Coast chain her parents took her to as a child.

Two years ago we were presented with a restaurant that demanded respect. Here was our chance to taste Colicchio’s famed food. We now have a restaurant that has fought for its position among the city’s best. Just as you can smell a dying operation, you can detect one that’s on the way up. At six-thirty on weekdays you can sit at the bar and see customers glad to walk through the glass doors. You can peer around the cabanas, which are filled with an after-work crowd. Craft has lost the glossy sheen of a restaurant aimed at alpha agents. Instead, at the bar there’s a guy loosening his tie and ordering a beer, a woman at a cabana freeing her foot from a constricting pump. The reversal of the economy may have created Craftbar, but Craftbar has completed Craft.