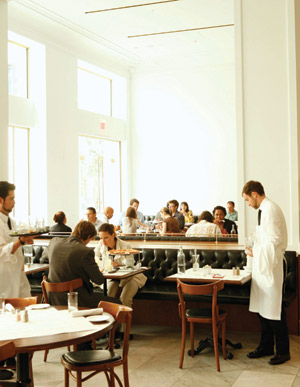 George Hamilton walks into Cecconi’s. Tanned (of course) and relaxed, he is about to sit at a center table in the crowded courtyard when from within the restaurant a guy yells, “George, George!” The man is going for it, pulling on some frayed thread that links him to the actor. Hamilton ignores him, though, and the man sits back down, unheard, unheeded, unseen, and in the unspoken but shared estimation of those who have witnessed the moment, snubbed.

That’s the way it is at Cecconi’s, where the burrata is fresh and the weight of the silverware recalls the elegant Italian hotels on the Amalfi coast. Newspapers and the trades are displayed by the entrance, and although eyes might peruse the headlines, they hungrily scan the room. As rarefied as Cecconi’s seems, it’s part of a mini trend. I’ll call it blinging up Nonna. Bottega Louie, which opened recently on the ground floor of a cast-iron jewel downtown, has the same moneyed look (a gilded hostess desk fit for Visconti), an equally excitable crush of people, and what appears at first to be a boilerplate Italian menu. Chicken brodo, pasta with bolognese sauce, eggplant parmigiana—each outfit has gone down the checklist, marking off the standards.

The twist is that both are good. The Italian trappings (hanging gourds of fontina at Cecconi’s, festive pastry boxes waiting for cannoli at Louie) as well as the classic menu items are no more than mood setters. Lurking in that sheath of tradition are two highly choreographed restaurants, each continuously open more than 12 hours a day. They are spots where you can gird yourself in the morning with a frittata and black coffee, step out of your routine midday with fried calamari, and immerse yourself in a scene at night sipping a limoncello. If there’s a conceptual difference between the two, it’s that Cecconi’s, with its air kissing and table-hopping, tilts toward class, while Bottega Louie, with its cavernous dining room, skews toward mass.

Despite the trades by the entrance, Cecconi’s isn’t a movie people’s restaurant. You don’t actually find movie people who have two hours to spend on lunch. You’re much more likely to find them at Lemonade, looking haunted and rushing a salad, than here. Its location in what was Mortons, a former power spot, carries some residue, but the crowd is more about having money than doing business. Aston Martins are parked out front, the men have the kind of rigorously maintained haircuts that cost hundreds of dollars, and the air is so laden with expensive moisturizer that I’ve benefited from facial treatments while doing little more than sipping a Soave at the bar.

The original Cecconi’s is in London’s high-rent Burlington Gardens. The spin-off on Melrose looks the same, down to the brass beer taps. Transplanting a restaurant usually doesn’t bode well, but knowing that Mirko Paderno is manning the store helps allay concerns that one is going to get a rehash of what works somewhere else. A native of Milan, Paderno has been alternating between hip and heartfelt restaurants for much of the past decade. At the Ashton Kutcher-backed Dolce, he valiantly went forth with some stellar risottos, but they ended up being plowed under by the buzz. At All’ Angelo, also on Melrose, he was able to reach profound depths with his cooking. On occasion he made a radicchio-only menu, using every variety from the ubiquitous chioggia to the rare speckled catelfranco and the puntarelle (practically wild chicory); it was so outrageously accomplished that with a little sea fog and a few bars of Mahler’s Fifth, one could have been transported to the Venetian lagoon.

At Cecconi’s, Paderno splits the difference between scene and sincerity. Not obsessed with authenticity but not satisfied with the vague generalities above which many Italian restaurants never rise, Cecconi’s is true to a false version of Italy. In its DNA are Cipriani and Harry’s Bar, those venues where the American bar of the 1950s came together with some of the more expensive Italian customs to form a timeless genre in which the waiters were sharply turned out, the gamberi were iced, and the food was light enough to not burden any traveling heiress. A bit of make-believe, yes, but the wonderful thing about Cecconi’s is that it demonstrates how a talented chef can lend personality to even the most well-established protocols. The crisp asparagus spears give zing to the creamy burrata, the grilled octopus is assertively charred, the golden baked gnocchi with a lush Gorgonzola sauce has a head-snapping immediacy, and the anchovy buried in the side dish of wilted escarole has a forthright bite. Plenty of pristine tartares are on the menu, too, but the lack of stews and guanciale and braised dishes adds up. The technique is there; the robust earthiness that serves as the cornerstone of the Italian table is not. This is polite food that can verge on the genteel. If Cecconi’s seems lifted from another era, Bottega Louie seems trucked in from another city. In the evening its panoramic windows glowing at the base of the gorgeous Brockman Building make it look like a trophy of East Coast or Midwestern urban revitalization; the place could be inside the Loop rather than at 7th and Grand. While the lofts above the business are empty (the developer went bankrupt), you’d never know it from the animated atmosphere at street level. Bottega Louie is not only a restaurant but a bakery, market, and patisserie in one. Whether anybody needs overpriced Bonne Maman jams or containers of limited-edition sea salt is questionable, but the rows of jars and bottles and colorful macarons contribute to the tableau of friends waiting to be seated at the tufted banquettes under a soaring white ceiling.

In the open kitchen, chef Sam Marvin and a corps of betoqued cooks labor to keep up with the commotion. Marvin has come into his own with the endeavor. Though his roots in L.A. run deep—he was a line cook at the original Patina with the likes of Josiah Citrin and Raphael Lunetta, and he was executive chef at the briefly reincarnated Le Dôme—this is his most surefooted effort. Here he and his business partner, Daniel Flores, have launched a venture that is as focused on its food (to research pizza Marvin went all the way to Frank Pepe’s in New Haven) as it is on its ultimate goal: to roll out several more if this one succeeds.

Open from 6:30 a.m. to 11:30 p.m. seven days a week, Bottega Louie is a vast operation. There’s something joyfully democratic about it, with people in thin arty glasses alongside office workers taking a break from another lunch at the Yorkshire Grill. Yet the precision with which Marvin and his longtime executive chef, Christopher Goossen, imbue the offerings is remarkable. The soups are vital and nurturing. The pasta fagiole, the classic bean and pasta soup, is rich with cooked beans and pasta, which makes it dense and soulful. The chicken brodo is a golden broth full of vegetables and flavor. When he goes old school, Marvin is self-assured. The chopped salad is a thing of beauty, with garbanzos, black olives, pepperoncini, and pepperoni in a sharp red wine vinaigrette. The clams oreganata are steamed to order, then covered with a mix of chopped herbs and bread crumbs moistened with cooking broth and olive oil so that they are yielding and soft when browned under the salamander.

Given that the restaurant regularly serves a thousand customers a day, steaming and breading clams to order indicates an impressive level of detail. Both the side of green beans and the antipasto of white beans and shaved onion have the bright notes of something just made. Often, however, that volume has a price. It doesn’t usually show up as a lack of flavor in a dish but as dead time between courses. Things tend to come off the tracks once every meal. When you’re a traditional Italian joint serving breakfast, small plates, and à la carte pizza, with a to-go business on the side, that will happen. Even dishes conceived with volume in mind and designed to require no assembly, like fish cooked in parchment paper, take aeons to arrive. I don’t think a customer should ever be kept waiting for a dish that demands nothing more than flinging a package in an oven when an order comes in.

Judging by the ice cream scoops served in soup bowls at both restaurants, neither chef is overconcerned with the rituals of dessert (though the Meyer lemon tart at Cecconi’s and the crêpes suzette at Bottega Louie do make some amends). I’ve found myself wondering whether the ho-humness was in fact a symbol of a conceit that had been exhausted. Did it take so much effort to transform the beloved Italian restaurant into an arena for every minute of the day that there was nothing left at the end? Even a little cookie in the ice cream would have been nice.

It’s a small point, but these restaurants are about fantasy; to have the conceit collapse like that is to catch an unwanted glimpse into the engine room, where it’s all about volume, price point, and expansion plans. But the moment also highlights how much the pair get right. Here we have a spin-off and a prototype for other spin-offs. They are formulaic—most Italian restaurants in America are—but they’re not cynical. That’s what I like about Cecconi’s and Bottega Louie. They may not be the expression of a culinary vision. Still, in the great Italian tradition they draw from, the interaction was never meant to be between chef and customer but among people sharing a meal.