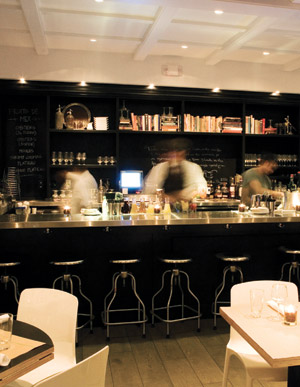 In the front room of Comme Ça, David Myers’s sleek new brasserie, a young man with an Auden-in-Berlin haircut leans toward a woman snug in a Day-Glo alpaca scarf. In the back room happy groups of four huddle over bottles of Gigondas, their black sweaters blending into the dark paneling. The whole thing is so convivial and urban , it only needs someone blowing out a plume of Gauloise smoke to be complete.

My two companions and I are taking in the scene, jammed into a corner, gripping a saucer-size table as every passing waiter and busperson takes turns kicking the legs of our chairs. Why then am I so happy? Because I am in a place that serves coq au vin and moules frites, and garnishes charcuterie plates with dollops of mustard. The sense of well-being that radiates from the robust food is hard to resist. At Comme Ça, parties of three may wind up at the worst tables, but I’ve just had crisp sweetbreads served over ribs of sautéed romaine, and I can only smile.

I tend to confl ate bistro and brasserie food. Both represent arenas where the French let down their guard. But there are nuances. The brasserie, started by brewers, has tended to have an Alsatian tinge, no more than accents really, such as a fondness for the long-necked green bottles of the region’s wine and a delight in choucroute garnie, or sauerkraut garnished with an assortment of meats. A bistro has more of a mom-and-pop dimension; you won’t find a platoon of oyster shuckers working outside . But in both cases, the food comes straight at you. Snails enrobed in garlic butter, fries dusted with salt and parsley, a charred steak finished with shallots and a quick reduction of white wine—they all build toward a mousse whose dark chocolate is suspended in whisked egg whites and cream. Whether you call it bistro or brasserie food, such are the pleasures of this kind of meal.

That directness and lack of airs fits well in Los Angeles. Not only is it being rediscovered by young cooks like Myers (the chef-owner of the rather high-church Sona on La Cienega), but it has thrived as other styles have come and gone. Taix, Robaire’s—many of our most venerable restaurants have carried in their souls the mark of the checkered tablecloth. One of my favorites is Café Pierre in Manhattan Beach, up the street from the pier. The restaurant began as Crêpe Pierre in 1977, and its owner, Guy Gabriele, is a charter member of the French chef community in Los Angeles.

By no means is everything great at Café Pierre. The moules frites, with a generic sauce maison and limp fries, can certainly seem— the overarching risk of traditional food—like a dish that has been served up nightly a few decades too long. But in many respects the place shines. The soupe à l’oignon is dense with ribbons of browned onion. The pulled ham hock terrine with a lusty sauce gribiche is excellent. The wine list is full of delights, like a white Rully from Vincent Girardin. I like to end a meal here with the vanilla brioche bread pudding, dedicated to longtime customer and Laker trainer Gary Vitti. The dish speaks to the eternal aspect that this kind of restaurant can have. Vitti has bandaged Kareem and held James Worthy’s goggles. Now he’s getting tips on chakra from Phil and packing Kobe’s knees in ice. That’s L.A. continuity right there.

Café Pierre knows exactly what it is. The Montmartre red walls announce the style; the menu confirms it. At Comme Ça matters are more tentative. Myers is a fine chef, and most of the dishes at Sona succeed by precisely balancing textures and fl avors. What made his reputation, though—creativity and a compulsive eye for detail—could be the kiss of death when applied to the clear lines of brasserie cooking. That was my big question before going to Comme Ça: Would Myers’s deeply controlled inventiveness drown out the quiet and fundamental satisfactions of a revered style?  The interior of Comme Ça is something akin to classic moderne. The dark panels and the collection of antique mirrors hint at yesteryear; the walls, sheathed in blackboard, have writers’ thoughts on France and food chalked over them; the tufted white banquettes provide a contemporary and funky note. To one side of the front room is a happy little bar with an iced seafood section. Across from it stands a cheese counter whose voluminous selection looks like it was sheared off from Neal’s Yard. The atmosphere? Pure bonhomie. The single small baguette that is laid down on the table at Comme Ça is something like a clarion call announcing Myers’s approach. It comes from the bakery that his wife, Michelle Myers, from whom he is now separated, started on La Cienega. Myers gained acclaim at Sona by being fixated on quality. He is here as well: The bread is artisanal, the water is filtered, a request for a cup of coff ee involves a 20-minute wait and a French press.

Myers and his chef, Michael David, have to a certain extent achieved the transition, blending Myers’s signature finesse and the requisite heartiness of this sort of food. The dishes that work well power straight ahead. The brandade of salt cod is exquisite. It is presented in a cast-iron container, browned from the grill and accented with a squidge of piquillo pepper puree. The roasted beef marrowbones are primal, the cooked-down oxtail “jam” that accompanies them serving as an ideal foil. In the sepia provençale, the thin layers of cuttlefish are charred and laid over a jumble of tomatoes, creating sharp and clear fl avors. The moules frites here are a definitive interpretation: The mussels are plump, the sauce is creamy, the fries are crisp and warm; the elements are executed with a level of care that makes this classic dish seem new.

But other dishes fall short of such mastery. Those that disappoint have been a surprise to me, because it is not obsessiveness but— quite the opposite—carelessness that undermines them. They seem hesitant. What could be simpler after all than deglazing the bacon lardons in a pan with vinegar and tossing the warm dressing over some frisée? Comme Ça’s version of the instant vinaigrette tastes gloppy and premade; the fat has started to set. The skate grenobloise also lacks that onthe- fl y brightness that has made the garnish of tossed lemon dice, capers, and tiny croutons a beloved preparation. Here, instead of frothy and vital, it is sedate, composed, and bland. The red cabbage with the duck confit has enough vinegar to strip the enamel from teeth. Did anyone in the kitchen taste it?

Myers’s menu is long, but in addition he loads the kitchen down with a diff erent dish of the day throughout the week. He seems to have fallen in love with the menus of places like Brasserie Lipp, the famed establishment on the Boulevard Saint Germain in Paris, without taking into account that Lipp has been working on perfecting its system since the 1880s. At Comme Ça the load seems to overburden the kitchen (which also has to make breakfast and lunch). A few slices of roasted leg of lamb on a bare plate (Thursday) does not a dish of the day make. The tough and undercooked veal shank (Tuesday) is unforgivable. You cannot screw up a braised dish in a brasserie; otherwise you’re just playing with the restaurant’s name.