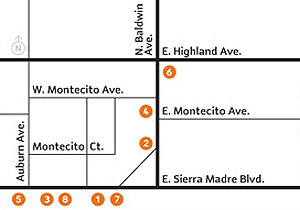 Don’t be surprised if you recognize the shady intersection that anchors this century-old community; it has appeared in dozens of films as a stand-in for Smalltown, USA. With its massive elm trees and mix of Victorian, Spanish, Craftsman, and midcentury homes dotting hilly streets, Sierra Madre has been attracting wealthy retirees as well as artists for decades. These days a crop of younger families is patronizing the new cafés and upscale shops that occupy the original brick-and-wood storefronts lining the downtown strip. 3 Attitude!
While the name didn’t draw us in (one too many exclamation points), we’d be remiss if we ignored this spot, which sells clothing from local designers, most of it for less than $50. Look for trendy sweaters by Bizz and dresses by Sugar Lips as well as jeans by Plastic (the cheaper and, some argue, better line from True Religion). Owner Marvin Dieguez makes the eclectic patchwork purses and belts by hand. » 90 W. Sierra Madre Blvd., 626-355-3929. 5 Charcuterie
On a warm night the patio here is ideal for lingering: Order a glass of wine or one of the rotating beers of the month, pair it with an Italian chopped salad, a black pepper-crusted burger, or a caprese sandwich, and take in the live music that often drifts over from neighboring businesses. Cheeses and other goodies are sold at the counter. » 120 W. Sierra Madre Blvd., 626-355-3908.

6 Creative Arts Group
Since 1960, the spunky nonprofit has bolstered the area’s artsy reputation, offering classes in ceramics, life drawing, watercolor painting, and puppetry. Throw a birthday party or explore the gallery, where works by students and local professionals are displayed. Proceeds fund the center, which supplements arts education in schools. » 108 N. Baldwin Ave., 626-355-8350.