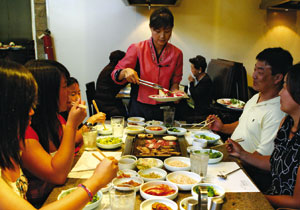 High-rises make the stretch between Westlake and Hancock Park one of L.A.’s most alluring hardscapes, with buildings going up on seemingly every block and clubbers filling the neon-lit streets after dark. Upscale shops and Gothic churches erected on Wilshire Boulevard in the 1920s earned that artery the nickname “the Fifth Avenue of the West,” and though many masterpieces have been torn down, the area still houses more art deco architecture than any other in the city. Today K-town is rebounding from the postriot ’90s. Barbecue restaurants and karaoke clubs have been the neighborhood’s main appeal for outsiders, but new shops, spas, and galleries are now turning it into a daytime haunt, too.

1 Galleria Market
Both the Galleria and Plaza malls have basement food markets; this one’s superior. Unless you understand Korean, the goods at the spotless, well-organized venue may confound. Begin a culinary education at the kimchi bar, with its array of pickled vegetables. Move on to some of the city’s least expensive fresh seafood, then snack on dried seaweed. » 3250 W. Olympic Blvd., 323-733-3800.

2 Wilshire Boulevard Temple
If the domed Byzantine revival building looks straight out of a movie, that’s because it was commissioned in part by Warner Bros. cofounder Jack Warner. Inside, it’s twice as ornate, with marble pillars, a ceiling carved in a pattern of octagons, and murals depicting biblical scenes. (Call in advance for tours.) » 3663 Wilshire Blvd.,  213-388-2401. 3 Hwa Sun Ji Tea & Coffee
Decorated with a fake waterfall, icicle lights, and standing screens, this teahouse is a microcosm of Koreatown, a mix of schlock and authenticity. Make a beeline for the semiprivate alcove to lounge on pillows, and order tea made from deer antlers and a shaved ice dessert that includes a bowl of fresh fruit, mochi, red beans, and green tea ice cream. Alert the server if you like your tea plain; many varieties on the menu are sweetened with fruit juice. » 3960 Wilshire Blvd., 213-382-5302.

5 Andrew Shire Gallery
New owners have broadened the scope of the gallery, which when it opened in 1989, only featured work by contemporary Korean artists. A recent group show included video art that could be manipulated by the viewer and Nam June Paik’s assemblages of television sets. In October the gallery will display work by graduates of Otis College of Art + Design. » 3850 Wilshire Blvd., 213-389-2601 or andrewshiregallery.com.

6 ChoSun Galbee K-town restaurants aren’t known for stunning decor, but this Korean barbecue joint is one of the neighborhood’s more attractive. A large part of the steel-and-glass interior is devoted to the reception area, which fills up on weekends with people waiting for tables. On the plant-lined patio, groups munch on panchan (complimentary appetizers) before cooking sliced beef, pork, and vegetables on grills in marble-topped tables. Forget to flip your meat? A waitress will do it for you. » 3330 W. Olympic Blvd., 323-734-3330.

7 HMS Bounty
With the Ambassador Hotel across the street razed to make way for a school and the Brown Derby around the corner renovated beyond recognition, this restaurant, relatively untouched since the 1920s, feels like a lone ship on choppy waters. Settle into a worn wooden booth, order a Monte Cristo sandwich, and watch a stylish crowd join old fogies at the bar after Wiltern concerts. The Bounty is one place where the influx of hipsters hasn’t ruined the old-time atmosphere. » 3357 Wilshire Blvd., 213-385-7275 8 Mobius
Offering a collection of art books and toys like the Gloomy Bear Wacky Wobbler, this youthful design-oriented store could have been lifted from the Fairfax street-wear strip. The crowd that shows up for art openings and product giveaways is the same sort that attends Comic-Con and describes coveted sneakers as “sick.” » 3300 W. 6th St., 213-385-9200. 12 Taylor’s Steak House
Oversize Naugahyde booths, martinis devoid of modern twists, and waitresses who call you “honey”: Taylor’s is a classic steak house. Between your iceberg wedge and a medium-rare London broil, head to the six-stool mezzanine bar for a palate-cleansing gimlet. Ask the bartender to turn off the TV so you can hear standards tinkling from vintage wall-mounted speakers. » 3361 W. 8th St., 213-382-8449.

13 The Wiltern
Completed in 1931, this theater clad in turquoise terra-cotta tile escaped the wrecking ball in the late ’70s. Restored to its original glory, it could double as an art deco museum. The 2,300-capacity hall hosts events almost nightly, usually concerts but also comedy, dance, and award shows. The lobby, with its high ceiling and grand staircases, is a glamorous backdrop for preshow mingling. » 3790 Wilshire Blvd., 213-388-1400 or wiltern.com.

14 Yong Su San
From the warren of rooms at the neighborhood’s most elegant restaurant, choose the one with the giant light fixture illustrated with Chinese writing. The vibe is genteel, the costumed waitstaff attentive, and the food never stops coming. » 950 S. Vermont Ave., 213-388-3042. 15 Shatto 39 Lanes
The bowling alley has not been renovated since it was built in the early ’60s, so the coffee shop, aboveground ball-return system, and tiki-esque signage remain intact. Local patronage has dropped off, although entertainment industry companies often congregate for parties. There’s also pool, video games, and foosball. » 3255 W. 4th St., 213-385-9475 or shatto39lanes.com.

16 Aroma Spa
You will be scrubbed the same way here as at the bargain Olympic Spa nearby—unceremoniously and with a rough washrag—but the pre- and post-exfoliation offerings are more plentiful. In addition to the use of hot tubs and dry and steam saunas, purchase of a spa service includes access to a racquetball court and swimming pool. » 3680 Wilshire Blvd., 213-387-2111.