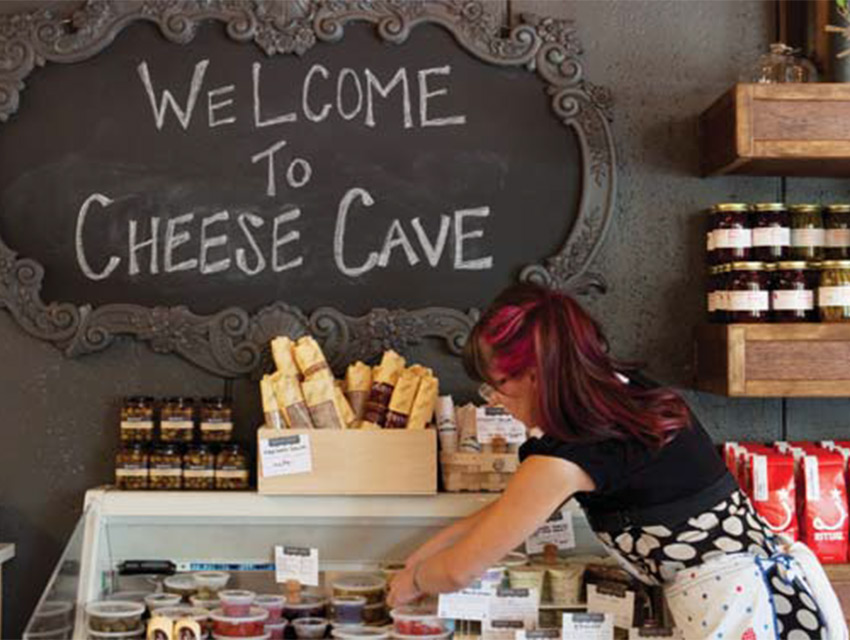 With its distinctive brick buildings, graceful cupolas, and shady colon-nades, Claremont brings to mind an East Coast hamlet set in the foothills of Angeles National Forest. Home to seven renowned colleges—the first, Pomona College, was built in 1887—the town began as a hub of the citrus industry before developing a strong arts identity. These days painters and musicians join students and professors at the cafés, galleries, and boutiques that line the quiet streets. As the mosaic (from the studio of local art hero Millard Sheets) proclaims at the city’s entrance, welcome to Claremont.

1 Folk Music Center
Fans of indigenous music gather among the instruments that pack this cozy space. Owned by Ben Harper (the grandparents of the funk-folk superstar opened the spot in 1958), it has seen the likes of Dave Alvin and Eleni Mandell perform on the small stage. » 220 N. Yale Ave., 909-624-2928. 2 Cheese Cave
Sisters Marnie and Lydia Clarke opened this shrine to fromage as a tribute to their grandfather, who founded Alta Dena Dairy in 1945. The reclaimed-wood interior was created by Lydia, a former design student who learned to make cheese at a creamery in England. The gourmet items include jams, crackers, and more than 100 cow, sheep, and goat cheeses. » 325 N. Yale Ave., 909-625-7560

3 Some Crust Bakery
Offering only homemade goods, this bakery and café is the neighborhood’s unofficial community center. Employees make deliveries on a Segway, locally produced ceramics are for sale in the coffeehouse, and patrons’ copies of Modern Painters outnumber laptops. The sugar rush from the whipped cream-topped Uncle Crustie sandwich—an explosion of banana, peanut butter, Nutella, and honey—will fuel your entire day. » 119 N. Yale Ave., 909-621-9772. 4 Authentix
The shop specializes in rare, limited-edition, and “quickstrike” sneakers from skatewear manufacturers like the Hundreds and Diamond Supply Co. Up to 200 varieties of shoes hang amid painted decks and photographs of secret skate locales.»143A N. Harvard Ave., 909-625-3289

5 Rhino Records
A cousin of the bygone Westwood store but independently owned since 1974, the 6,000-square-foot wonderland of vinyl and CDs is presided over by a mock rhino trophy head and a DEVO energy dome. It’s easy to lose a day sampling the vast collection of records—from bluegrass to acid rock to Broadway show tunes—on the many loaner turntables. » 235 N. Yale Ave., 909-626-7774. 6 Claremont Packing House
Back when oranges were king, huge packing houses linked by railroads were built to accommodate their distribution. Claremont’s citrus center opened in 1909 and after being long vacant was recently resurrected as an arts and entertainment venue. Among its attractions is a jazz club that doubles as a fondue lounge. » 532 W. 1st St., 909-623-0535
7 Viva Madrid!
Duck down the corridor lighted by chandeliers to a dining room decorated armada style with barrels, model galleons, and armor. A lively crowd gathers to sip sangria and taste Iberian delicacies. » 225 N. Yale Ave., 909-624-5500.

8 The Back Abbey
The former power station turned gastropub looks like a replica of the Alamo and features more than 100 craft beers. You can soak up the brew with Bavarian pretzels, charcuterie, and what may be the best burgers between Pasadena and Palm Springs. » 128 N. Oberlin Ave., 909-625-2642. 9 The Grove Vintage
Fashion and decorative arts from every decade of the 20th century collide in this boutique. Cloche hats, floral sundresses, and a rainbow of gabardine, linen, and double-knit polyester apparel fill the shelves and racks while black-and-white movies flicker on a giant plasma screen surrounded by macramé owls and starburst sconces. Owner Donna Daniel will gladly customize garments with minor alterations. » 206 W. Bonita Ave., 909-625-2380
Photos By Lisa Romerein
Map by Michael Newhouse