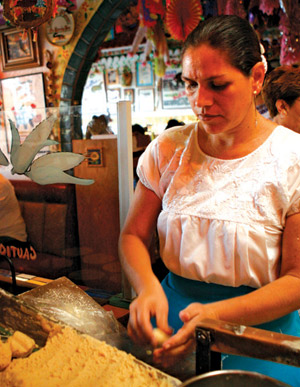 Street names like St. Louis, Indiana, and Brooklyn (rechristened in honor of Cesar Chavez in 1994) are holdovers from the early 1900s, when a Jewish community thrived in this Eastside enclave. By the 1950s, masa was as common as matzo, as Mexican families snapped up homes being sold by Jews moving to the Westside and the Valley. A Metro Rail Gold Line extension along 1st Street, to be completed this year, will make it even easier for day-trippers to come for Mexican food and music—the famed Mariachi Plaza will serve as a subway stop.

1. Aguirre Shoe Store The original terrazzo is intact at this space, which has housed shoe purveyors since opening as Solnit Bootery in the early 1900s. Salvador Aguirre took over in 1981, and daughter Leticia maintains a wide and affordable variety of crib and infant shoes from brands like Converse and K-Swiss. » 2314 E. Cesar E. Chavez Ave., 323-265-3642. 2. Teocintli
The stylish outfit is part gift shop (you’ll find shirts, bags, and other accessories bedecked with Frida Kahlo and Chiapas imagery), part bookstore (Noam Chomsky’s Hegemony of Survival shares space with Gregory Rodriguez’s Gang Life in East L.A.), and part art gallery (a recent show featured photographs of barrios as near as Norwalk and as far away as Milan). » 2727 E. 4th St., 323-266-2117.

3. La Parrilla If a piñata exploded, the result might look like the interior of this restaurant, a favorite gathering spot for families. In a mural splashed across one wall, owner Maria del Carmen Salas is flanked by Eastside giants Richard Alatorre and Oscar de la Hoya. The menu hews to comfort food: The guacamole is prepared each day in a molcajete, and house-made tortillas cook on the griddle. » 2126 E. Cesar E. Chavez Ave., 323-262-3434. 4. Hollenbeck Park Double-crested cormorants, domestic geese, the occasional escaped iguana, and picnickers find refuge by the man-made lake decorated with a fountain and Victorian bridge. The park was established in 1892, when banker John E. Hollenbeck donated the 20-plus acres. » 415 S. St. Louis St.

5. Eastside Luv There is no sign for this bordello-like bar, but you’ll know you’ve arrived if you can see the red chandelier through the glass above the door. Red is a theme: It also shows up on the flocked wallpaper and the tin ceiling. A long wood bar and club chairs invite lounging. Saturday is burlesque night, and Sunday is open mic, when anything goes. » 1835 E. 1st St., 323-262-7442.

6. Casa 0101 The intimate theater and cultural center is run by Boyle Heights native Josefina Lopez (her play Real Women Have Curves was made into the acclaimed indie film). She offers classes in everything from painting to writing. Theatrical productions have ranged from workshops to an ambitious weekend that showcased the works of nine local playwrights. » 2009 E. 1st St., 323-263-7684.

8. Pet Source Owner Jesse Ornelas stocks fish and reptiles, but the standouts are the birds: golden-breasted waxbill, lavender, and star finches, among others, and at his MacArthur Park location, a large selection of unusual hookbills. » 2500 E. Cesar E. Chavez Ave., 323-263-3138. 9. La Serenata de Garibaldi For more than 20 years food pilgrims have been migrating to East L.A. for the sauces of Jose Rodriguez, especially the way he pairs them with seafood. The version known as the Molcajete, which Rodriguez credits as the oldest recipe in his repertoire, packs a wallop.The front facade features Spanish colonial ornamentation, as does the spacious interior. From the parking lot in the rear, patrons ascend an iron-railed staircase past a tiled fountain. » 1842 E. 1st St., 323-265-2887.