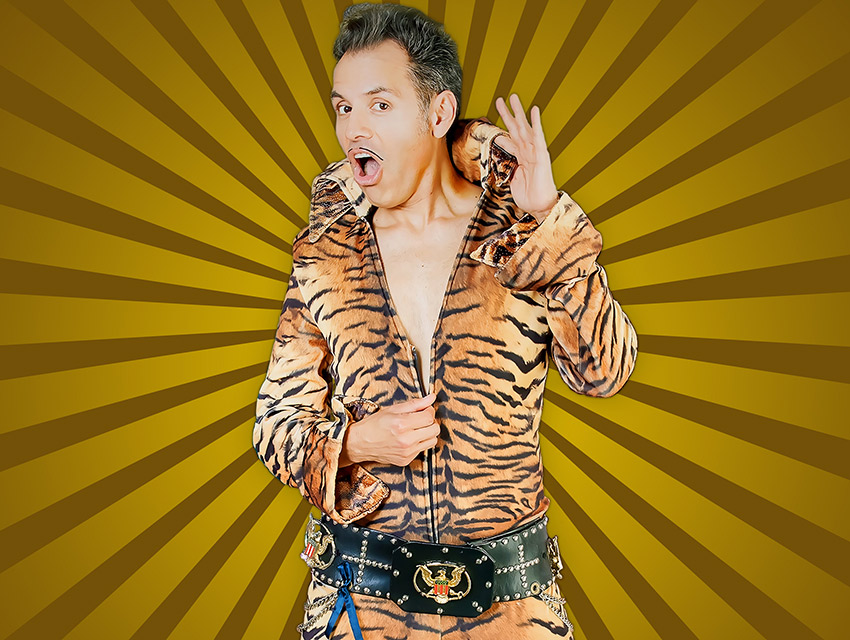 I started playing in bands when I was 16. I was in a band called the Zeros. The very first show we played was with the Go-Go’s and the Weirdos at the Whisky. It was the beginning of what would become the punk rock scene. Joan Jett was a fan of the band, and she used to live across from the Whisky. We’d hang out at her house and then I’d drive home and be back in high school in the morning.

I first moved to L.A. in 1978, when I was 18. All the punk rock kids lived here, across from the Masque. It was right behind a Love’s Barbecue and a block from the Pussycat Theater. To be 18 and live with all your friends with your nightclub right across the street…Jane Wiedlin just got signed to the Go-Go’s, and she gave me her apartment and her bed.

El Vez started when I was the curator of La Luz. We screened Elvis films every year on the anniversary of his death. I had a folk art show in the theme of Elvis. We had an impersonator, and he wasn’t the best. I said, “I could do that,” so I became El Vez, the Mexican Elvis. You could get tight black jeans, Day of the Dead stuff, art books, and plastic ants. The shop was pretty unique, and there’s always stuff you’d never see anyplace else.

It has an old time vibe and is a Chandleresque step back in time. I liked the little juice place that had the old stainless steel machines. It was an old-timey health food stand. In the ’80s it was a big deal to go downtown, a completely different deal than going there now.

There’s a lush green canopy of trees and trails that go up into the hills. The old mansion made me think of the canyons and the hippie period and Manson. I never explored it. I loved not exploring it. If you explore it, it loses the magic. I really like the alleys of the Fashion District. It’s a thrill since so much of my wardrobe is made for me. The one in New York is canyonesque, and this one is only two stories high, so all the fabric and feathers and polka dots and metallic lame are out in the sun. I’d go shopping for my Elvettes costumes, and the music was always great. It’s a nice jumble of sounds and colors and cheap and shiny stuff.

I’ve been going since I was a kid. It was a magical step back in time. I know they’re refurbishing it. All the crazy people would stay on the bottom level, and I remember thinking, “you’re so fancy going up to the third level.” I love all the little caves and niches and Jell-O and having turkey dinner any time of the year. I am going to go when it reopens.

There are three levels. There are produce and butcher shops and Mexican boots and cowboy necessities, knick knacks, and religious items. There is always the smell of churros being made. On the top is where all the mariachis play. If you’re there on a Saturday, all the mariachis play at the same time, which is really a great effect. There’s a Yucatan backdrop with black lights that change slowly like a sunset.

When we were kids we would hop the fence at this little apartment building right below Yamashiro and use the swimming pool. It was all nestled up in the pines and such a sweet little pocket. My punk rock friends told me about it. People weren’t so security minded in the ’70s. We were brazen kids, but we were polite.

It was the first place I ever did mushrooms. The Chinese Garden was when I thought, “OK, this is all in my head,” and I jumped in the pond and my friend dragged me out. I remember the Australian leaves were all turning alive and becoming snakes. The walls were breathing. When you’re in one area you can’t see the others. You’re in the middle of a set, and you’re in a magical place. And I always liked Pinkie and Blue Boy [in the museum].