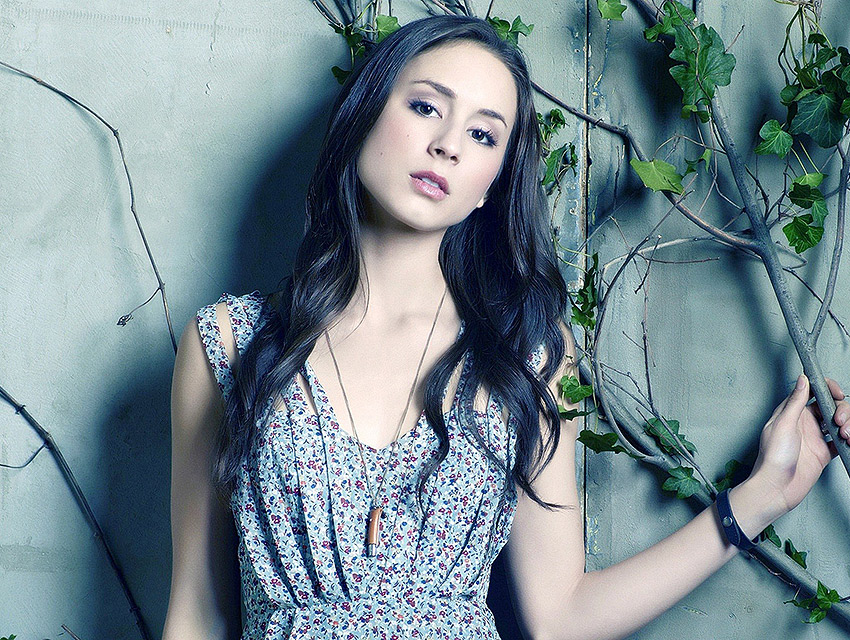 It’s one of the most peaceful and beautiful places I’ve found in this neighborhood. When the sun sets and you look across the water, it reminds me of the hills of Italy. It’s such a great walk or run to take, t00—it’s flat, so you can kind of convince yourself that you’re a hardcore runner even though there’s really only one hill that you ever have to tackle. One’s enough, that’s what I always say. I love the Hollywood Bowl, but there’s something so wonderful and tiny and tucked away about the Greek. Especially being outdoors and hearing the coyotes at night. I recently saw Postal Service there, which was a childhood dream. I was actually weeping through everything. I’ve also seen Conor Oberst and Bright Eyes there a number of times. He’s my all-time favorite songwriter. I met him at the Greek when I was 17—too young to meet one of your idols. He invited me to a party, and that was one of those moments where my life could’ve been totally different, except that I was like, I have homework to do and this is the right decision because I want to keep you as one of those people that I love from afar. For a while I was trying to keep it secret and small because I’ve been going there for like five years. But now it’s one of those things where it’s like, there’s no way we’re keeping this a secret because Ryan Heffington, who started it and is the main teacher, is an actual star. He’s has been blowing up because he did Sia’s Chandelier video choreography, the Arcade Fire video with Andrew Garfield, and the latest Lykke Li video. The best part about Sweat Spot, though, is that it doesn’t matter what shape or size you are, if you’re male, female, young, or old. You just go and have fun. There’s a great hip-hop class and a really fun rock ‘n’ roll ballet class. It’s just a place to get dirty and sexy. There’s this incredible girl there who must be 15 now, but she’s been going there since she was 12. I’ve been watching her dance and I finally introduced myself and told her, “You are incredible.” And she was like, “I watch your show!” I was like, “No, shut up about my show, you are amazing!” I was kind of enlisting her to teach me how to dance like she does, and she was like, this is so awkward! One of my favorite places—even though I’ve only been there twice, maybe—is Jumbo’s Clown Room. I take pole-dancing classes, but I’m just starting. It goes great with aerial silks, which I also do. It’s actually kind of hilarious. It’s not a strip bar—you’d call it a bikini bar because there’s no nudity and because you can drink. The women there are so talented. That’s the thing: I love circus, I love pole, and I love aerial for the gymnastics element and for the creative element. I know most people would be like, Oh my god, she’s talking about a strip bar, but you don’t understand; these women are basically Olympic athletes. They are so beautiful, and they are not there for you! (Laughs.) They are there for themselves. And anyways, it’s fun! I literally go there and think, give me all of the vegetables, and don’t buy anything from that baked goods case. Their desserts are wicked. Every time I go with my friends I’m like, “So, who’s getting the side of mac and cheese…? Not me, but we obviously are.” Whenever I go out to brunch with my best girlfriend we always have “table toast,” which is French toast for the table (laughs). We went out with all of our guys and we were sitting there and we were like, “So we’re going to get a table toast and then we’re going to get blah blah…,” and everybody was like, what? It’s two joint stores, and there’s one side that’s sort of like Victorian medical supplies which is really fun, but the side that I’m into is like an old curiosity shop. It reminds me of this store in New York that I love called Evolution. Necromance is full of the most beautiful collected animal bones and peacock plumes and taxidermy things. I got [costar] Lucy Hale snake vertebra earrings from there. If you want to get somebody a gift that you know they will never ever have, Necromance is your jam. At Fred Segal in Santa Monica, there is a bar for this perfume called Memoire Liquide. I’m obsessed with scents, and my favorite thing to do for people when I feel like I kind of understand them is make them a signature scent. Memoire Liquide has the most beautiful display of these tiny little essence oils, and you choose your top notes, your middle notes and your bottom notes. You can make it an eau de toilette or you can make it a spray with an alcohol and oil base. Once you make your scent you can name it, and they’ll keep it on file for you so you can always go back and get more. I live so far away from it, but Gjelina is my favorite place in the world. Tasting Kitchen is so good, too, but I never get over to Gjelina enough to be like, it’s okay to go to Tasting Kitchen. At Gjelina I will eat anything with burrata. Anything. And their pizza is so good. I’m a pescatarian, and they always have a beautiful piece of fish. And Gjelina Take Away? It’s so good. They have great tuna salad, but any place that has cases of vegetable as side dishes makes me the happiest person in the world. If they ever opened up a Gjelina on the East Side I would probably never leave. What do I get at Moon Juice? What don’t I get at Moon Juice? They have a ginger apple lemon drink that’s incredible. I’m obsessed with ginger, so every time I have juice or anything it has to have a bunch of ginger in it. I’m talking to the point where I can’t really swallow it because it’s clearing out my nose. There’s also a great carrot, lime, and coconut juice that’s amazing. Their almond milks and their date shakes are great, and so is the Mango Lassi, which has coconut meat, mango, and probiotics with a little bit of lime. It is the most refreshing thing. It’s one of those things that cools you from the inside out. It’s one of those incredibly expensive stores, but I will save up to go buy lotion or a beautiful crystal geode necklace. They’ve got these very selective clothing items that are all made of linens as well as sun hats and beautiful handmade sandals made of leather with woven soles. They’ve also got these beautiful prints that are sort of natural geodesic designs from sacred geometry. Shareen is the nicest person. I’ve been going there since I was so little. A lot of the girls that started going to her when they were 14, she dressed them for their proms and now she’s dressing them for their weddings. All of the wedding dresses and all of the gowns that she designs herself are named after women, and it’s the names of all of these girls that she’s known since they were young teens. Taking a trip to her warehouse is also the best girl date you could ever go on because there are no boys allowed inside. You can get naked and eat candy and put on ‘80s prom dresses, or, in my case, Victorian ripped-to-shreds things that I just float around in. Little Dom’s is one of my favorite restaurants ever. Their French toast comes out in a cast iron skillet, so technically it’s bread pudding. It’s covered in whipped cream, and it’s pretty much all for me. And their brunch is just as good as their dinner. I love that old Italian atmosphere. Basically anything that reminds me of New York, I’m there. It’s outside of Twentynine Palms, Joshua Tree. I don’t want to say anything about it except that it’s the most amazing experience you’ll have. If you’re on a desert road trip, which is one of my favorite things to do, always stop by the Integratron for a sound bath. And I won’t say anything more than that.