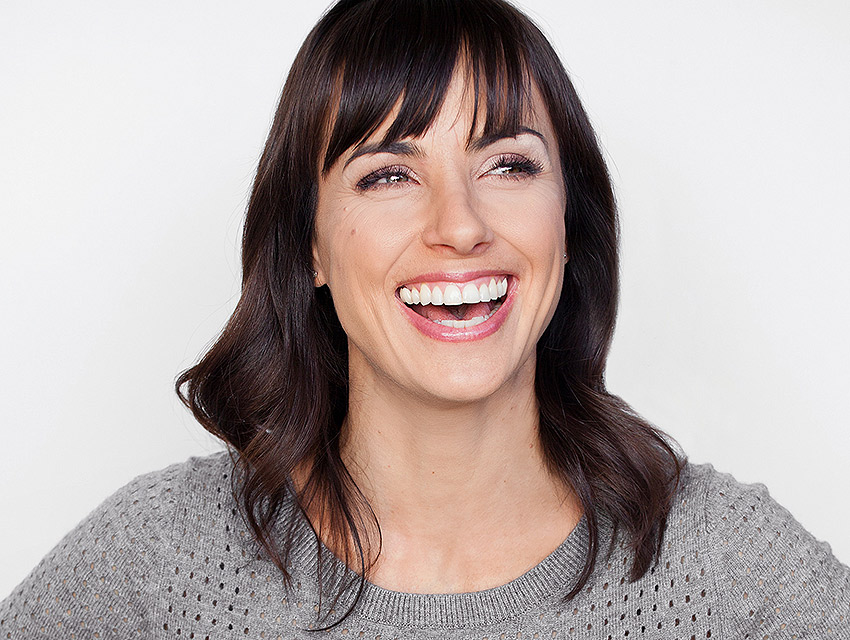 It’s not your traditional Mexican food. They have this blackberry mint basil margarita that is to die for, and their guacamole is made with an intense amount of garlic, which I love. You don’t get garlic often in guacamole; it tends to be with tomatoes and onions, but this one has garlic and it is so incredible. I’m a huge Mexican food addict. I like that La Ventura is a step above traditional Mexican food. I love this place because number one, it’s kind of in a forest, and there isn’t another place in L.A. quite like it. Number two, all of their food is organic and homemade right there on the premises. You’re going to find that I love avocado, and they have an avocado sandwich there that’s awesome. It’s on pumpernickel bread with sprouts and it has fake bacon bits. And their baked goods are incredible. They have a lavender shortbread cookie there, too. I take them home with me, but they only last for two days. It’s every Sunday on Gower and Hollywood Blvd.
We have breakfast there every week, and we do all of our grocery shopping there. They have these baked cinnamon doughnuts that we always get, and I don’t feel bad eating them because they’re baked. Valerie Confections also has a stand where they sell zucchini bread. We buy it by the loaf and freeze it. It’s one of my daughter’s favorites. Oh, and Harry’s Berries has the most incredible strawberries I’ve ever had. It’s one of L.A.’s best kept secrets as far as stores go. They’re known for their ceramics and their tile, and whether you’re looking for a gift for a birthday or a baby shower or an anniversary, you’ll find something. They have everything from textiles to napkins to jars and vases. When I don’t know what to get somebody, I go there. I love them so much. Everything they sell I would like to have in my house. When I go out to eat, the food has got to be incredible because my husband is an amazing cook. Restaurant food needs to be good to get me out of the house. Ammo is my go-to place not only because it’s in the heart of Hollywood and is a great “meet you in the middle” location but also because of the food. They introduced me to and made me fall in love with radishes. They serve raw, cold radishes with butter and sea salt. I was never one to like radishes, but every time I go there I order them. No matter if you’re vegetarian or picky or a meat eater, Ammo has something for everyone. It is the best sushi in L.A. They have this crispy spicy tuna, which is spicy tuna on top of a little bed of sticky rice that has been pan seared, and the fish just sits on top of it. They also have a tuna sashimi dish topped with crispy fried onions. The name is pretty plain, but I think they have one of the best chocolate sorbets. It tastes like the most decadent chocolate ice cream. The gelato is also incredible. We went to Italy and tested gelato in all different towns in Italy, and Gelato Bar is most similar to the best place we tried. The coffee there is also incredible. They use beans from Forty Ninth Parallel, which is a very famous coffee from Vancouver. It’s some of the best coffee in L.A. Again, it’s one of those places that has a little bit of everything. It’s a great lunch and breakfast place. Their salads are gigantic. And the ingredients—the combos are amazing. Next to the giant salads there is a wonderful assortment of baked goods. I guess they call them “cash register goodies,” the baked goods that they put right next to the register. Olive and Thyme has one of the greatest assortments of cash register goodies. They were selling a glass jar filled with caramel sauce that had a little tin of sea salt attached to it. I saw that by the cash register and I was like, Oh my god I love this place. I wanted to buy everything. And it’s in Burbank of all places. Not necessarily where you’d think of going to this incredible restaurant/café/brunch spot. There’s a Clare Vivier store on Sunset and Micheltorena, and it’s kind of like every woman’s dream. It’s got purses and clutches and luggage. You walk in and you want everything. It’s definitely eye candy for any girl, and I would say for any men looking for gifts for their female loved ones. Her stuff is fantastic. They have really inventive cocktails. My favorite was called a Blackberry Kumkwat Daisy, which I was like, I don’t understand…what’s in it? It was blackberry and vodka with mint. I don’t like frou-frou drinks, but this wasn’t too sweet because they’re using real fruit, not syrup.

To support the funding of Offer & Compromise, visit the film’s Indiegogo campaign page.

My LA to Z: Doug Jones