Home Music There Are Secret Concerts Happening All Over L.A. That You Really Need... 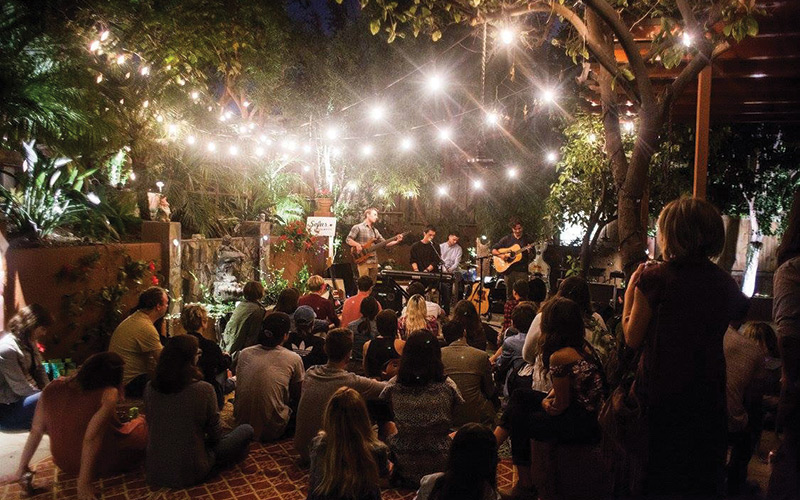 On a recent Saturday night, I arrive at a Venice Boulevard event space with beers in hand, my name on a list, and dressed for a concert. A smiling host ushers me into the Mar Vista Art Dept. through a back door. Inside, groups of people sit on mats, rugs, and sleeping bags, most sipping wine from red plastic cups and eating snacks from grocery bags at the foot of a tiny riser. When the music starts, the audience is rapt, as if Kurt Cobain’s taken the MTV Unplugged stage. Except the night’s performers aren’t A-list famous (yet)—they’re just really good.

This is the vibe at most Sofar Sounds concerts—short for Songs from a Room—a company that stages small pseudosecret gigs in 368 cities all over the world. (L.A. joined the fray in 2011; back then there were one or two gatherings a month. The goal for October is a tad loftier: between 40 and 50.) The idea all came together in 2009, when British founders Rocky Start, Rafe Offer, and Dave Alexander began hosting musicians in their flats—a solution to noisy bars and distracted audiences. Today anyone can apply to host or perform. Artists skew up-and-coming—Leon Bridges, Yeasayer, Tank and the Bangas—and venues range from backyards and living rooms to recording studios and motorcycle showrooms. Provide your pad, and Sofar takes care of the rest, including booking, insurance, and wiring. “We’re like the circus,” says Sofar’s L.A. City Leader, Sara Mengesha. “We bring everything in; we take everything out.”

The concept fosters discovery and mystique, reinvigorating a scene often tainted by hype and cynicism. Audiences get exposure to new music for $15, and bands get an attentive room. The concert location is revealed only days before, and the three-artist bill is kept quiet until the day of. The night I go, the lineup is diversely stacked with a moody synth-popper called Flavia, the groove-heavy Philly jazz crew Killiam Shakespeare, and the rock and soul family group the Sledge Grits Band. Each plays a tight 25 minutes. “If a guest isn’t connecting with one artist, there’s another coming right up,” Mengesha says. (Her team sifts through more than 30 applications per week.)

In the future, she hopes to add venues like the Griffith Observatory and Dodger Stadium to her Rolodex, which already includes Union Station. “To have local artists in iconic L.A. spaces,” she muses, “would be amazing.”