Home Dining 54 of the Best Things To Do in Downtown L.A. 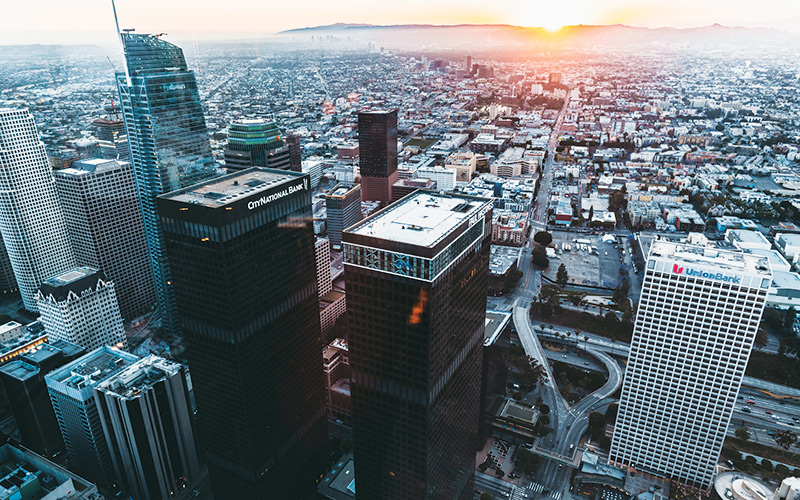 Trendy blocks. Delicious eats. Killer coffeehouses. Must-see shops. Splashy new bars. The revival of our once-idle city center kicked off more than a decade ago, and it’s only picking up the pace.

Before Church & State opened in 2008, the Arts District was anything but a culinary destination. Then came Bestia in 2012 and the Factory Kitchen in 2013, and the transformation was in full swing. Chef Wes Whitsell turns out a Southern-inflected menu at Manuela, the swanky canteen in Hauser & Wirth. Where do the neighborhood’s chefs eat? We asked Whitsell for five favorite dishes. “A tender, juicy, perfectly seasoned, thick-cut pork chop is grilled so it’s a little smoky. Fennel seed brightens it. Arugula and these not-too-sweet apples cut the richness. They only make it twice a year, so get it when you see it.”

“This truck, in front of Blacktop coffee on Fridays, has one of the best tacos I’ve eaten, with sweet potato, feta, almond-chile salsa, fried corn, and scallions. It’s sweet and spicy and comforting.” “Meatloaf gets a bad rap, but it speaks to me because it’s a very Southern dish, and I grew up with it. This one is made with turkey and covered with caramelized onions and a well-seasoned brown turkey gravy.”

“The taco truck across from Pizzanista! has the best carnitas. They put it between two tortillas with melty cheese, and the cheese oozes out and makes crispy pieces on the edge. It is the ideal ending to a night of drinking.” “This malt takes me back to when my great-grandma made them for me. She never made a full glass—it was always half full, which made me want more. So I get the half portion, and I always want more.”

Sushi spots and ramen joints abound in Little Tokyo, but these two are can’t-miss.

It doesn’t get more iconic than this strip mall sushi parlor, which has been supplying the area with pristine tuna rolls and shrimp nigiri since 1980. The long lines might intimidate, but they can move fast— don’t let anything get between you and that lavish $17 sashimi special starring an always-changing selection of market-fresh fish.

There are now five L.A. locations of this retro ramen counter, but there’s no substitute for the quirky Little Tokyo original. Brimming with curly noodles and seared pork belly, the velvety daikoku ramen has bookended many a downtown bar crawl. Leave room for the crispy panfried gyoza.

The Depression-era hotel has done away with Moorish details in favor of its original Spanish Colonial Revival stylings. Bottled cocktails served on ice are available poolside at Rick’s, while Bar Alta—the 28-seat, reservations-only bar overlooking the lobby—offers a personalized beverage experience.

The 18 Social cocktail lounge, located on the top floor, has an FDR Martini (inspired by the favored drink of the president who signed the order to end Prohibition). History-happy out-of-towners and staycationers can book a tour of DTLA’s abandoned speakeasies and network of underground tunnels.

In recent years the hotel, home of the first-ever Oscars afterparty in 1929, had fallen into disrepair. Now the building is in the thick of a multi-million-dollar renovation, and you’ll see some modern upgrades (like Instagram-friendly neon wall art by Kelly Graval). A second-floor speakeasy opens later this year.

DTLA is experiencing a craft brewing boom, and the Arts District is its HQ.

So nice we’re going to list it twice. The breezy two-story space is ideal for an IPA or three and a game of Sorry! (even if some pieces are missing). Non-beer drinkers will be delighted by self-serve still and sparkling water on tap.

Roll some SkeeBall, try the bubble hockey. The house beer is tapped from finishing tanks be-

hind the bar, but if you’re drinking only one, try the scotch ale. Bonus: They pour spirits, too.

It’s not in the Arts District , but we couldn’t leave out this giant craft beer bar (70 taps!) and restaurant. Brew hounds in the know—you, now — will do well to ask for the secret list of rare Belgian sours.

Downtown is probably the most progressive coffee community in the country in terms of density and bang for your buck—it’s a really special time to be in L.A.” So says Michael Phillips, and he should know. As the director of training at Blue Bottle Coffee, he was on board when the Oakland-born roaster recently opened its eighth L.A. outpost, this one in the Bradbury Building on Broadway. The city is brimming with quality third-wave coffee purveyors, but no other quadrant of the map has downtown’s caffeine-saturated volume. Seekers of a well-pulled shot or finely balanced pour over can be sure that if they bypass one place, they’ll hit another soon enough.

While the Santa Cruz native has several L.A. locations, none measures up to the Spring Street flagship. Set in a 1924 building, the high-ceilinged space is airy, and the verdant plant wall outside will make your espresso that much better. Cold-pressed drinks from Juice Served Here are also available.

You can’t see the Bradbury Building’s Victorian wrought iron from the shop, which sits in the landmark across from Grand Central Market, but you can order flights of iced drinks from the cold bar, including a sweet shakerato and a Suzuki Refresher with sparkling cold brew, mint, and lime.

The Little Tokyo branch is the mothership of the minichain that former corporate lawyer Bobak Roshan started in 2011. The Kyoto-style iced coffee is potent, and the siphon-filter drip bar makes for an impressive show.

Plenty of atmosphere accompanies the quality product at the 3rd Street café, including sideways-leaning cups, neon lighting, and a moss-covered entrance. There’s a reason it’s been described as a “hipster hobbit hole.” (But, like, in a good way.)

It’s worth braving the crowds for a spot at the Grand Central Market stall launched by Kyle Glanville and Charles Babinski (the team behind Larchmont’s Go Get Em Tiger). The top-notch beverages and cool vibe (more cocktail bar than traditional coffee counter) provide a dreamy afternoon pick-me-up.