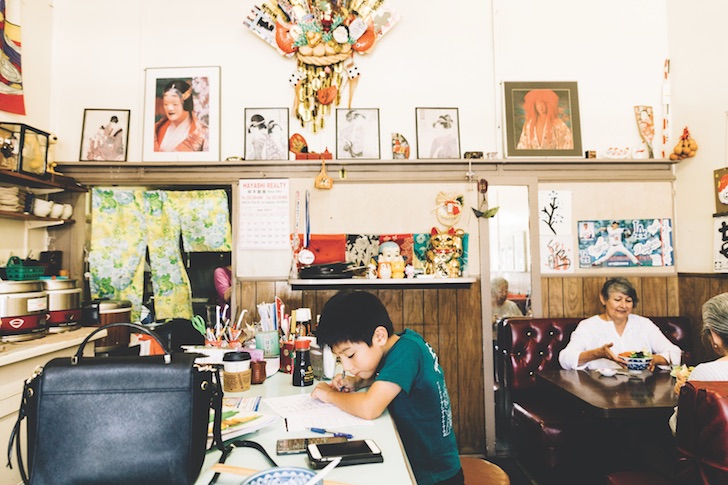 A restaurant like Musso & Frank’s can transport you to a different era, but a tiny one like Otomisan in Boyle Heights takes you to a lost world. A few frayed Japanese lanterns hang on the weathered exterior that looks out onto 1st Street, just east of Mariachi Plaza, and a sign on the door reminds anyone coming for the crackling tempura that the place closes nightly at eight. Noren curtains separate the kitchen from a compact dining room, where three tufted maroon banquettes and five backless stools frame a slightly dinged counter.

When the place opened in 1956—the original name was Otomi—the surrounding few blocks were an Eastside Sawtelle, a Japanese American enclave abuzz with grocery stores, churches, temples, social clubs, and restaurants. In the age-old flux of Boyle Heights, most of those businesses have given way to Latino ones, but Otomisan has become something more meaningful than a holdout; it’s a connecting point for those who appreciate a carefully arranged salmon chirashi bowl and the comforts of a good combo platter with a breaded tonkatsu cutlet, salad, and cut nori-wrapped roll.

Yayoi Watanabe, a native of Hiroshima, has owned the business since 2005, when the last of three previous owners retired. During a recent lunch, I find her jotting down a take-out order from a bus driver who stops in on his days off. Nearby (as all things are in the cozy cubbyhole of a space) 81-year-old Judy Misaka exchanges greetings with a booth of Latino regulars. Permed and smiling, the longtime Boyle Heights resident shifts between decades, from her father being processed for the internment camp at Santa Anita Park to her friendship with Watanabe, who brings her staples from Little Tokyo grocery stores. Time stands still as she talks. Wearing home-team whites, Hideo Nomo is frozen mid-pitch on an old Dodgers poster taped to a wall. The chef, who goes by Negishsan, can be heard frying the tempura, and a few moments later Watanabe has managed to fit it all, even the long green beans, inside a Styrofoam container secured with a rubber band. “This,” says the bus driver as he heads toward the door, “is a treat.”

RELATED: The Boyle Heights Gallery That Once Fought Gentrification Is Now Being Labeled a Cause of It