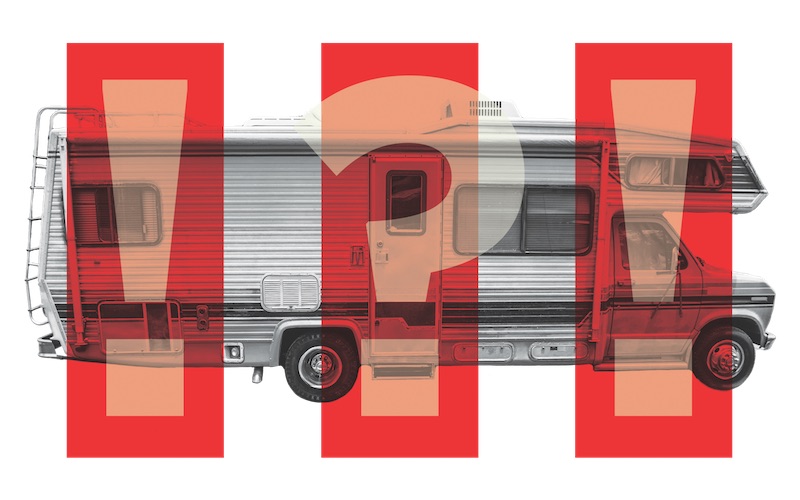 Little more than a year and a half ago a sun-faded motor home showed up under the magnolias by my house in the Westside neighborhood of Del Rey. The parking regulations on streets surrounding nearby Glen Alla Park had changed the night before and pushed a few other RVs onto my street as well. Nobody seemed to come in or out of the vehicle closest to me; there was never a light, or noise, or any sign of life. A neighbor was soon at my door with a petition in favor of parking restrictions, saying , “We have to keep the riff raff out.” For years people in campers and vans had been crapping in the irises along the sidewalk, leaving them festooned with used toilet paper, despite nice bathroom facilities in the park. I signed the petition.

Months went by and the RVs moved on, except for the one in front of my house. It would disappear for brief periods but always returned. I was working in my yard one morning when the door opened and a Chihuahua mix sprinted out of the RV. “Monkey!” I said as the dog frantically licked my hands. I recognized it as the dog that romps with my son’s mutt in the park. A tall, thin woman smiled at me from the doorway. “I know you,” she said, shaking my hand. “Your dog’s name is Jenkins.”

Desiri Hawkins is 54. She is a fast talker, unmarried, with no kids and three dogs. She drives a station wagon that she parks as close to her RV as possible and utilizes, in fact, two RVs—one she lives in and one she’s stuffed with clothes for the needy in addition to costumes and props for what she hopes will be a street theater company. Like Maggie Smith’s character in the film The Lady in the Van, in which a homeless piano prodigy moves onto a guy’s driveway, Hawkins had another life as a professional performer. She’s an advocate as well for what she calls “movable homes” and used to hold meetings on the Westside to organize RV dwellers against parking regulations that targeted them.

She’s been threatened with arrest for allegedly trespassing multiple times after being denied service in stores that don’t permit the dogs she maintains are service animals. People know her. Hawkins likes to stay on my street because, she says, she rented the house three doors down from me almost 20 years ago.

After that she leased a place in Marin County, where she had an accident that left her legally disabled. When I asked her what happened, she went silent. I know that she has occasional trouble with her hands and suffers from what she describes as “post-traumatic stress.” After living with her mother in Oregon, she bought the first of five RVs she’s owned and made her way back to the beaches of L.A. She likes the air and has a lot of friends here.

Where Hawkins can go is limited, though. Santa Monica, Malibu, and Culver City have bans on staying overnight in parked vehicles. In L.A., city municipal code 85.02 went into effect in January, making it illegal to sleep in a vehicle from 9 p.m. to 6 a.m. unless it’s in an approved overnight zone. For now those zones are all in nonresidential areas. The city is going to study the law for 18 months and then roll out a new safe-parking program, says Alisa Orduna, the mayor’s homeless-policy director. It will likely involve non-profits and churches managing small lots with bathrooms and security. “We have an affordable-housing shortage,” says Orduna. “We can’t penalize people for not using a product that we don’t have for them.”

The need is only growing: The 2016 census by the Los Angeles Homeless Services Authority found 46,874 homeless in L.A. County, a 5.7 percent increase from 2015, with about a fourth living in vehicles and encampments.

Others want stronger enforcement of the laws that are already in place. “I question the premise that all of these folks are indigent,” says Mark Ryavec, president of the Venice Stakeholders Association.

He led a group of residents working with then-councilman Bill Rosendahl on a parking ban that displaced about 250 RVs from Venice. “I think that some of these folks are living in these RV and campers by choice.”

Ryavec ran unsuccessfully this year to unseat councilman Mike Bonin, who helped author the current version of 85.02, and he would like to see RV parking on city-owned land far from residences or outside the city—for instance, in Palmdale. I understand why. I have seen how vehicle dwellers can turn yards into dumping grounds for everything from cigarette butts to diapers. They get drunk and fight with homeowners. But it’s not fair to indict Hawkins for their crimes, and the more I learn about her struggle, the more I’m OK with her being around.

Some of my neighbors are not so OK. They pull up in their cars and scream at me to “get rid of her!” She’s blamed for flat tires and lost pets. One man expressed his rage by smearing dog poop on the door handles and locks of her live-in RV and car every couple of days. He often targeted the wrong cars, angering other neighbors. Some blamed both the poop guy and Hawkins. I blamed Trump, of course. This went on for months until Hawkins confronted him and applied for a restraining order.

One morning while Hawkins was waiting for the injunction to be granted, her friend Lauren came out of the RV and got poo on her hands. “What kind of sick person would do that?” she said to me, washing up in my sink. “Desiri doesn’t have a mean bone in her body.” (While poop smearing can be evidence of a mental disorder, another neighbor dubbed the behavior “assholism.”)

“When I see what I describe as a ‘hater,’ and it’s so often a landowner, then I have to bless them,” says Hawkins. “Even though I’ve had people slamming on my vehicle with their fists or with sticks in order to drive me away, I have to somehow find it in my soul to forgive them. Because if I don’t, I’m just carrying it on my back. And I carry enough on my back.”

Hawkins tried Section 8 housing, which provides vouchers for low-income residents, but her place was infested with cockroaches and run by what she called a slumlord. She went to stay with friends, leaving her belongings in the RV. The reason she was able to park indefinitely in front of my house is that because of her disability status, she was exempt from the parking regulations, although 85.02 now prohibits her from sleeping overnight in the RV. And yet even with a disabled license plate and placard, she has received a blizzard of tickets that she’s spent a lot of time in court getting dismissed.

“I’ll show you, none of them actually know the law,” Hawkins said one day last year, sitting down in my kitchen. She dialed parking enforcement and asked for clarification on the disabled placards: Was she exempt from the parking regulations or not? A supervisor took over and said, “According to my training, you are subject to regulation. You have to move.”

“That’s wrong, ma’am, I am exempt,” Hawkins said and turned to me. “See?” she said. Two days later I was sent written confirmation from the L.A. Department of Transportation that she was, in fact, exempt.

It’s hard not to view her situation as discrimination. There are cars on our street that haven’t been moved in so long, the tires are rotting, but they’re never cited.

The LAPD refused to investigate the shit smearer, and Hawkins had to fight like hell for the restraining order. “I would ask people for their compassion and for them to understand that there’s always two sides to the story,” she says. “Just because you don’t know somebody doesn’t mean that they’re bad or have what you perceive as a lower social status. Because I don’t see myself as somebody who’s lower than others. I see myself as equal.”