Home Outdoors When Fires Rage in SoCal, These High-Flying Canadians Come to the Rescue 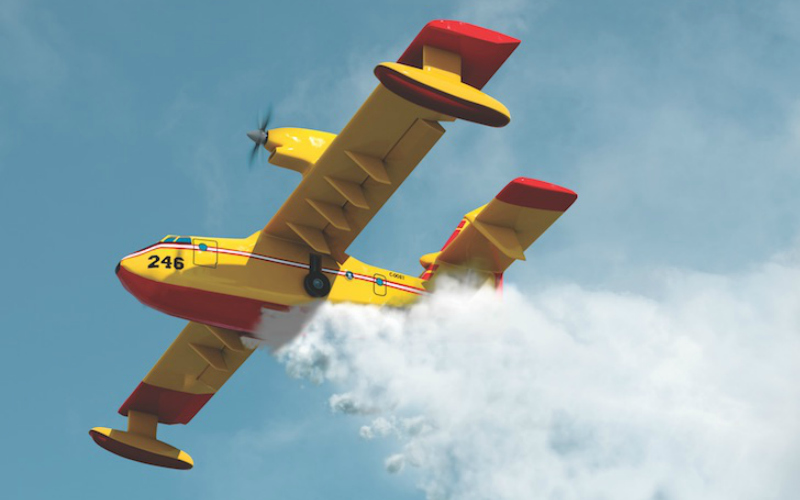 Fire season is nothing to celebrate, but at least we can look forward to the dramatic display of the Los Angeles County Fire Department’s aerial fleet. While converted DC-10 airliners and helicopters play essential roles in taming the flames, none do it with the amphibious flair of the airplanes known as Super-Scoopers. The county leases two Canadair Bombardier CL-415s from Quebec’s Ministry of Transportation, usually from August to October or November every year. Here’s a flyby.

With their two 2,380-horsepower engines, the propeller planes can fly at about 200 mph, which helps them get from the Valley to blazes all across the county in just five to ten minutes.

In two smaller tanks the planes carry a soapy concentrate that is sometimes mixed with the water t0 create fire-retardant foam. Once discharged, the foam puffs up to 25 times its original volume, clinging to the vegetation below to help prevent the flames from spreading.

Unlike the department’s other firefighting planes, these “flying boats” don’t need to land when they run out of water. Instead the pilots fly to a nearby lake or the ocean, lower a pair of three-by-five-inch scoops, and skim the surface for about 12 seconds. The Bombardiers are the only ones in the fleet that can store salt water.

Each aircraft has two tanks, which together store up to 1,600 gallons of water. These are initially filled while the planes are parked at the Van Nuys tanker base. Once the pilots reach the fire, they can open one or more of their plane’s four water-drop doors, controlling how quickly the liquid is released.

Maneuvering a 22-ton fixed-wing aircraft is no easy feat during L.A’.s windy fire season. To assure they don’t dump water on power lines (or citizens), the pair of specially trained Canadian pilots operating each plane surveys the area before dropping water in tandem with other aircraft.

RELATED: If Your Hike up Runyon Ever Goes Sideways, This Is Who Will Rescue You