Home Music The Music Festival That Time Forgot: Inside Steve Wozniak’s US Fest 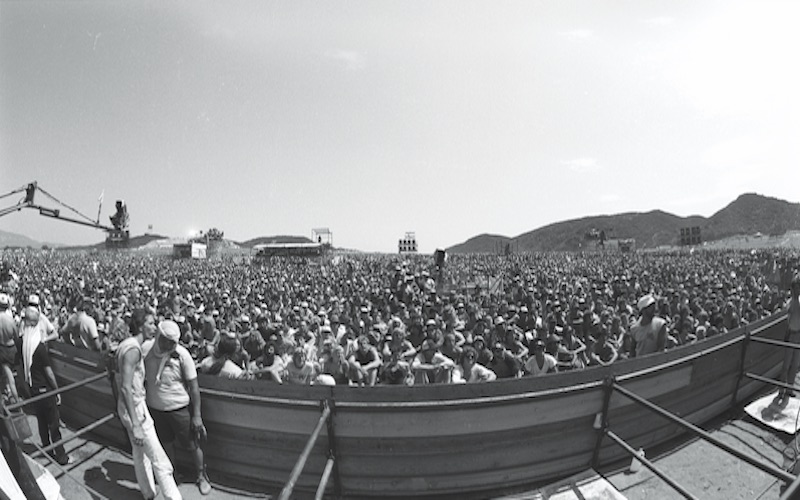 Woodstock set the bar impossibly high for rock festivals. Ever since, people have expected nothing less than majesty and transcendence, although merely mind-blowing will do in a pinch. So we pay princely sums and slog to giant expanses in the middle of nowhere, surrounded by hundreds of thousands of strangers, to watch days of music on a stage that’s so far away, it’s in another zip code. Sometimes, though, they deliver. Think of the Summer Jam at Watkins Glen, Live Aid, early Lollapaloozas, or even some Coachellas, and how they earned their own breathless paragraphs in the cultural mythology. Thirty-five years ago, on September 3, 1982, the US Festival took its shot at the pantheon, ambitiously plotting an updated version of utopian bliss. Set in the San Bernardino town of Devore over Labor Day weekend , the mammoth three-day gathering was billed as Woodstock reincarnate. It was to be a mass cleanse of the narcissistic ’70s—out with the Me Decade, in with…US. Reagan was in the White House, and the MTV generation was starting to coalesce, so the time seemed right for a return to ’60s idealism.

RELATED: A Look Back (In Photos) at The Us Festival

The man behind it? Apple cofounder Steve Wozniak, fresh from a life-changing plane crash that prompted his leave of absence from the company he started with Steve Jobs. At 32, “Woz” wanted to turn on a new generation by putting on the most spectacular rock festival in history. He booked some of the biggest acts of the day, including Talking Heads, the Police, Tom Petty, and the Grateful Dead, drawing a cumulative crowd of 425,000, with a peak of 200,000 on day two. But rock was only part of the inspiration: Wozniak also put the bold new future on display. To that end, the grounds would be home to five air-conditioned tents in which people could escape the 110-degree heat and find video games like Krazy Kong, an Atari computer (the Mac was more than a year away), and props from The Empire Strikes Back.

“It was meant to have the fruits of high-tech innovation,” says Dave Wakeling, the lead singer of the English Beat, who played on day one and followed up with an appearance at the second US Festival, in 1983. “The cutting edge of pop music and the cutting edge of social change were now going to combine effortlessly to complete the promise of the hippie revolution,” he adds with a laugh. “I think that was the brief.” For a while it seemed like they might actually pull it off.

Fueled by pixel-eyed idealism, Wozniak spent a year and $12.5 million to create the 1982 US Festival, forming the company UNUSON—as in Unite Us in Song—for the purpose. Then Woz and Co. brought in Bill Graham Presents, an outfit that had been putting on rock shows since the mid-’60s, to handle the heavy lifting and ensure that the Wozzies stayed out of their own way. “They had a lot of ideas about what they wanted to do, but they really didn’t know what they were doing,” says Bob Barsotti, then-director of operations for Bill Graham Presents.

“If you’re friends with this really rich guy who’s having a really big party, you get caught up in the whole thing. ‘Let’s have a big party.’ [But] if you’re asking a hundred thousand people to come here and you treat it like a party you’re going to lose. You have to be the responsible adult in the room.”

Together Graham and Wozniak formed a fairly visionary tandem. Moments after Gang of Four kicked off the weekend on a scorching Friday afternoon, it was apparent this was not your hippie dad’s rock festival. Powered by 400,000 watts, the audio was crisp and clear, and attendees could see the stage from anywhere, thanks to strategically placed video screens—an innovative concept that offered pristine viewing even during the daytime.

“If you went to Watkins Glen or Woodstock and you were the 148,000th person, the chances that you would hear or see the show were actually pretty slim,” says Barsotti. “But if you’re the last person at the US Festival, you could hear it, you could see it, you could buy some food at a concession stand; there was a toilet that wasn’t overflowing, and there were water spigots to get clean water out of, and it was all within walking distance from where you were. That had never been done before.” There was even a satellite link to the USSR.

It was also a day of firsts for the English Beat’s Wakeling, starting with a nerve-racking helicopter ride from the band’s L.A. hotel to the concert grounds, where an estimated 130,000 people had gathered. “We could see this huge mass of people with three sets of PAs going off into the distance and then a hill, and people on them, and they were really far away,” remembers Wakeling. “I’d never seen that many people in one place. My knees were shaking. So for the first couple songs I had to lock my legs to stop them from knocking.”

Despite the size of the crowd, the first festival saw only 36 arrests and 12 overdoses. Barsotti says the biggest headache for Graham’s operation may have come from members of Woz’s Silicon Valley posse, many of whom had created bogus backstage passes. “We had set up the system,” Barsotti says. “But they started counterfeiting the passes, and Wozniak, being the playful guy that he is, thought it was really fun. He could take anything and reproduce it with his computers. So we had to change the whole way we did our security thing and change the pass system. It was like a game of cat and mouse.”

Wozniak was said to have lost $10 million on the first US Festival. So naturally, he doubled down. Held on Memorial Day weekend in 1983, the next US Festival aimed for even more impact, bringing in acts like David Bowie, U2, Van Halen, and the Clash. This time around Wozniak’s team divided the days by theme—New Wave , heavy metal, rock, and a bonus “Country Day” the next weekend. On “Heavy Metal Day” alone, some 350,000 people showed up to catch Ozzy Osbourne, Judas Priest, and Mötley Crüe among the headliners. If the Wozzies had aggravated Bill Graham’s crew at the first fest with their bogus backstage passes, they crossed the line with “Heavy Metal Day”: According to Barsotti, Graham considered the potential for rowdy crowds too much of a security risk, so he and Woz parted ways. Graham was right: Arrests nearly tripled that day, and one man was beaten to death with a tire iron in the parking lot; another died of an overdose.

It was the US Fest’s Altamont moment, though things had begun unraveling the day before, when the Clash held a press conference, refusing to go onstage. The putative reason: The band, which was at its height and falling apart at the same time, had learned that the festival was charging $25 for tickets, not the $17 the Clash had been told. They also fumed because their $500,000 fee was small change compared with Van Halen’s $1.5 million pay-day. In turn, organizers flashed the half-a-million-dollar check on the screen behind the band as they performed.

There would be no third US Festival. But for Ethan Lawrence, who was an attendee at the second one, US provided exactly what he was seeking. “We all wanted the full Woodstock experience,” says the 54-year-old screenwriter. “We hadn’t had that. It’s about us being together. Everyone wanted this to be remembered as a Woodstock thing.”

An effort was certainly made to re-create a Woodstock vibe at both events, down to the helpful vendors on the venue’s outskirts. “This guy had a lemonade stand. He had a sign that said ‘Pepsi a dollar, 7UP a dollar, LSD five dollars,’ ” Lawrence recalls. “He was just selling LSD like it was bottles of water.” “You can’t re-create Woodstock because that was the high point of a cultural paradigm shift,” Barsotti says. “But in terms of the culture in the 1980s, it was a very similar experience for the kids going to that show. They were in heaven.”

Together the two weekends were said to have cost Wozniak $20 million (though we’ll never know; he declined to be interviewed for this story).“It was an interesting gesture for the time,” Wakeling says. “Of all the Apple folk, Wozniak did the thing that made you go, ‘Wow.’ However, it’s not that difficult to do something fantastic if you’re willing to lose $20 million.”

Marc Geiger is the head of music at William Morris Endeavor and a cofounder of Lollapalooza. He was a college student and indie rock promoter when the first US Festival rolled out. He was not impressed. “I thought, ‘San Bernardino? Blah. A hundred thousand people? Blah.’ I think we saw it as a rich tech guy’s toy.” Geiger’s assessment of the US Festival’s cultural legacy? None at all.

The US Festival may not have changed the world, but it did make an impact: Perhaps US had to suffer so that other mega rock events could have better sound, better sight lines, better food options. Elements pioneered at US are commonplace at modern-day festivals such as Coachella and Bonnaroo. After all, when you’re spending a weekend in a dusty field in search of transcendence, a clean toilet means a lot.

MORE PHOTOS: A Look Back (In Photos) at The Us Festival