Skid Row has existed for at least a century, but it wasn’t until the 1970s that it became the sprawling city it is today—a forlorn stretch of tarps and tents and SRO hotels corralled into four square miles between 3rd Street to the north, 7th to the south, Alameda to the east, and Main Street to the west. In the ensuing decades, it has become the homeless capital of America, ringed by miles of new condos and skyscrapers. An estimated 2,800 unhoused people live here at any particular time, and thousands more trek here annually from across the country, undeterred by the occasional attempts to sweep them out.

But that may soon be changing. In a stunning ruling in April, as the coronavirus began to recede from Los Angeles, U.S. District Judge David O. Carter ordered city and county officials to put a roof over the head of every homeless person living on the streets of Skid Row by fall. To prove he was serious, Carter ordered the city to place $1 billion into an escrow account to pay for fast-tracked shelter and housing—which might make this the first real attempt to reverse the decades-long practice of using the area as a human dumping ground for the poor, mentally ill, and addicted. (The city is preparing an appeal.) In the meantime, downtown’s breakneck development continues to steadily encroach on this enclave of misery. Just last month, a Denver-based developer unveiled an ambitious new plan to build a $2 billion commercial complex on the neighborhood’s southern edge.

For most Angelenos, Skid Row is a nuisance, a cautionary tale, or a shameful reminder of the city’s callous indifference to its least fortunate citizens. But for the people who live here, it’s also a community—one with its own peculiar set of leaders and laws and outlaws and hierarchies, enforced by people who are trying to make the best of the hellish reality that they’re living. Over the past year, Los Angeles writer-at-large Jason McGahan and photographer Christian Witkin made repeated visits to chronicle the Skid Row that most outsiders never see. Here are a few of the people they met along the way. 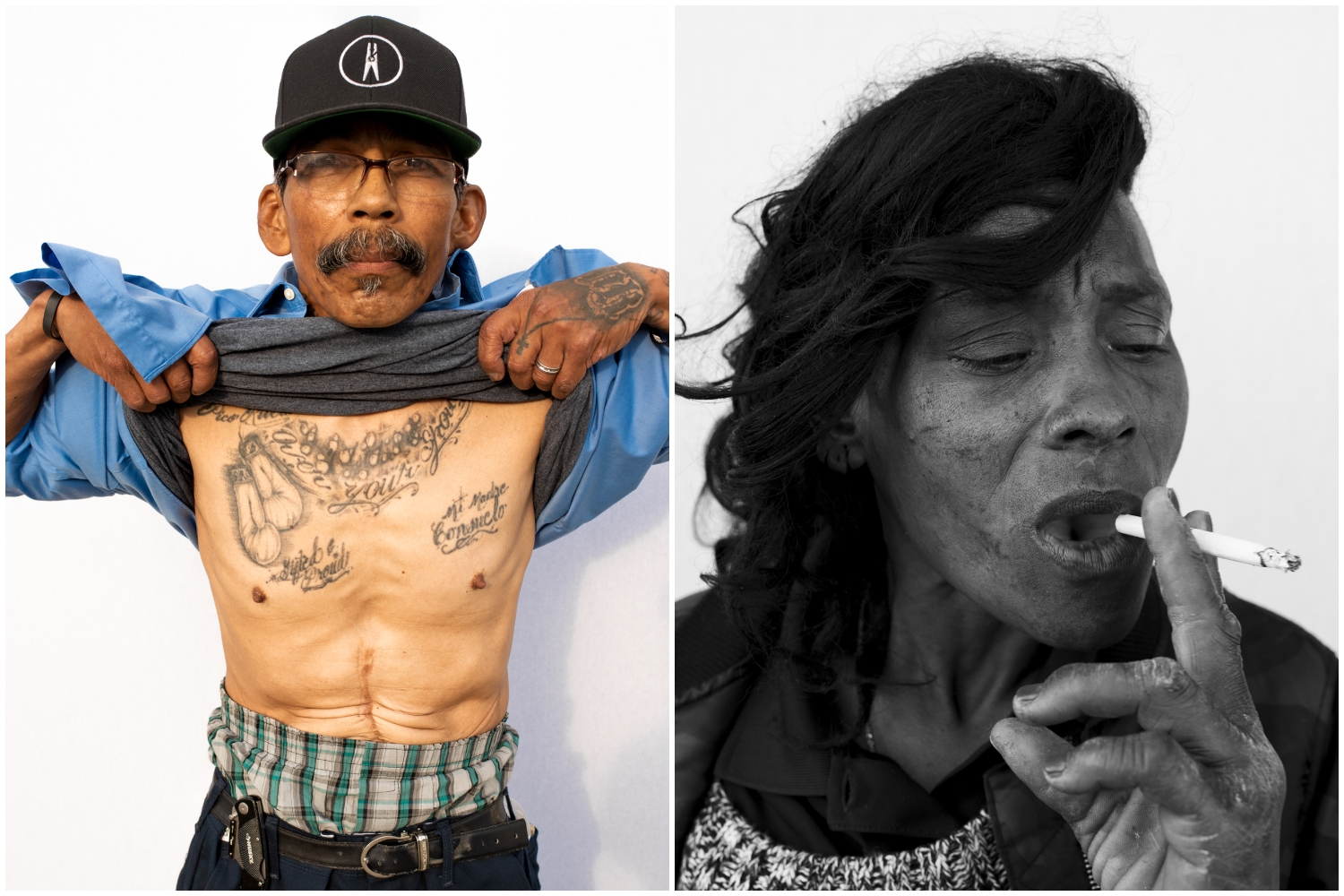 The way that different races and nationalities split up on Skid Row reminds Boxer of prison, where he served 28 years. He got sent to Skid Row after his release. “It was me being thrown to the wolves,” he says of his arrival. The 54-year-old was an amateur fighter before he went to prison for inadvertently killing a man in a brawl. He soon was residing at 6th and Crocker, one of the few areas where Black gangs allowed Mexicans to deal drugs. “That was our get down,” he says. Six years out of prison and three years sober, he lives in an SRO hotel nearby and still visits the area to help friends who never made it off the streets.

Sharon (right), a gruff Skid Row veteran, has always wanted to be “in pictures.” She materialized in the middle of a shoot, posed for a few minutes, and left without a word.

By some estimates, white people make up 14 percent of Skid Row’s population, but few stick around for very long. Most of them are what the locals call “tourists”— anxious visitors who blend in and pick up drugs after dark. Some never get out of their cars; others nod off on the sidewalk or “sublet” a tent from a local and get high. From runaways to film execs to aerospace engineers, white folks from all walks of life escape to Skid Row to indulge their habits freely and anonymously in a place where dealers are available around the clock. Trevor, 23, left Salt Lake City with his girlfriend and spent time in San Diego and Orange County before he woke up on a Skid Row sidewalk on a cloudy Saturday afternoon.

Shiloh is a high school senior who lived for a month in a small tent at 5th and Gladys, across the street from the abandoned Salvation Army shelter. At 17, she was homeless and taking public buses to school in Pasadena. Living on the street is less dangerous than the women’s floor of a shelter, she says. Neff, 26, of Compton, is her boyfriend, and the couple’s neighbors call them “love birds.” They keep a two-year-old pitbull chained outside their tent for protection. Shiloh says the Skid Row community is the best family she has. 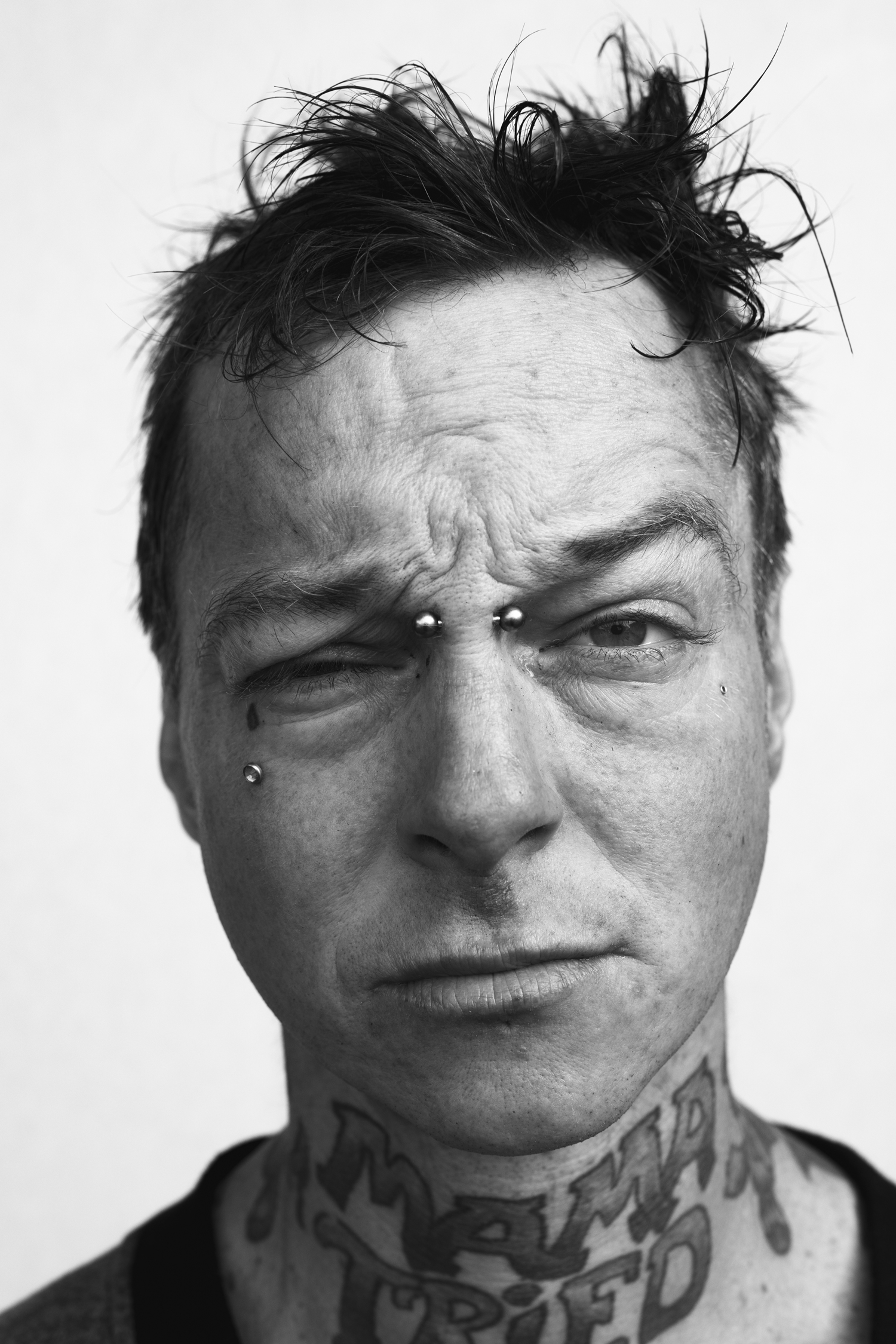 Josh, 36, used to work on a paving crew before he ended up on Skid Row. He sometimes dresses like a woman because, he says, police in the area tend to leave women alone. But Skid Row is also home to a close-knit clique of transgender residents, many of whom turn to sex work to survive. They congregate every night after dark on a two block stretch known as the “ho stroll,” pushing cis sex workers to less desirable locations near the 10. Donna Rae, a 44-year-old Black trans woman from Alabama (not pictured), has “escorted” for years on Skid Row and says rising demand for trans women has boosted the starting rate for some types of sexual favors to $40, several times what her cis counterparts charge. Some johns seek out Skid Row for the sheer thrill of it, she says. “Rich white guys from Beverly Hills don’t want me to go to them; they want to come down here.” 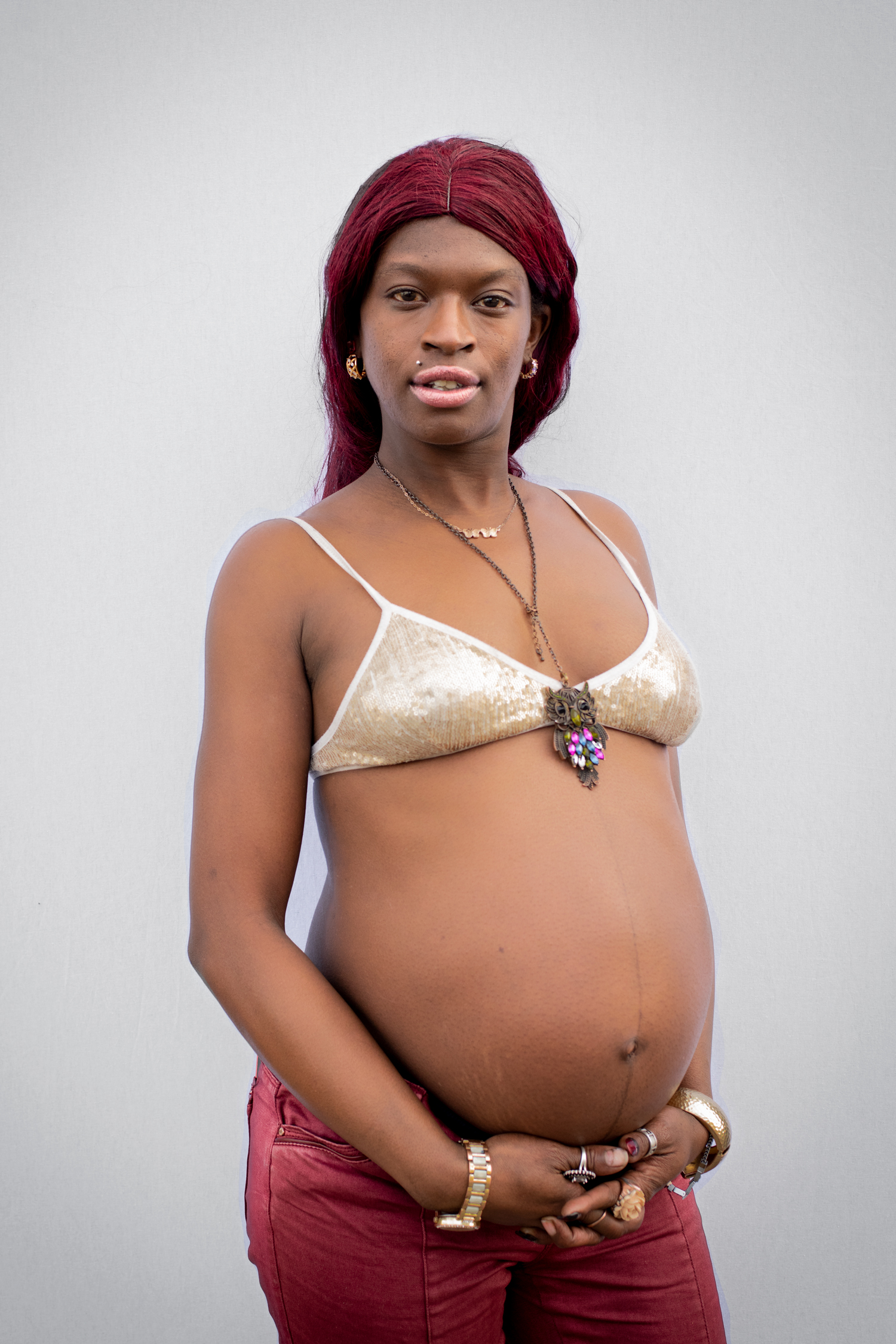 Keke was hiding from a boyfriend who had beaten her up when she met Miami on Skid Row. Miami would check on her every day until Keke healed, and for that she fell in love with him. He proposed at a cookout the couple hosted in 2019; he got down on one knee and gave her the diamond from his earring. By then, the couple was getting clean and earning money renting tents to people with nowhere to stay. Shortly after Keke got pregnant with Miami’s child, police arrested him on an outstanding warrant. Suddenly, he was facing five years in prison. But Keke sent letters to the judge about the child they were expecting, and Miami was diverted to a drug rehab program. Keke hopes to find a permanent apartment for the family for when Miami gets out. “He’s afraid of being abandoned because his mom abandoned him on Skid Row when he was 16. But I’ll never abandon him,” she says. 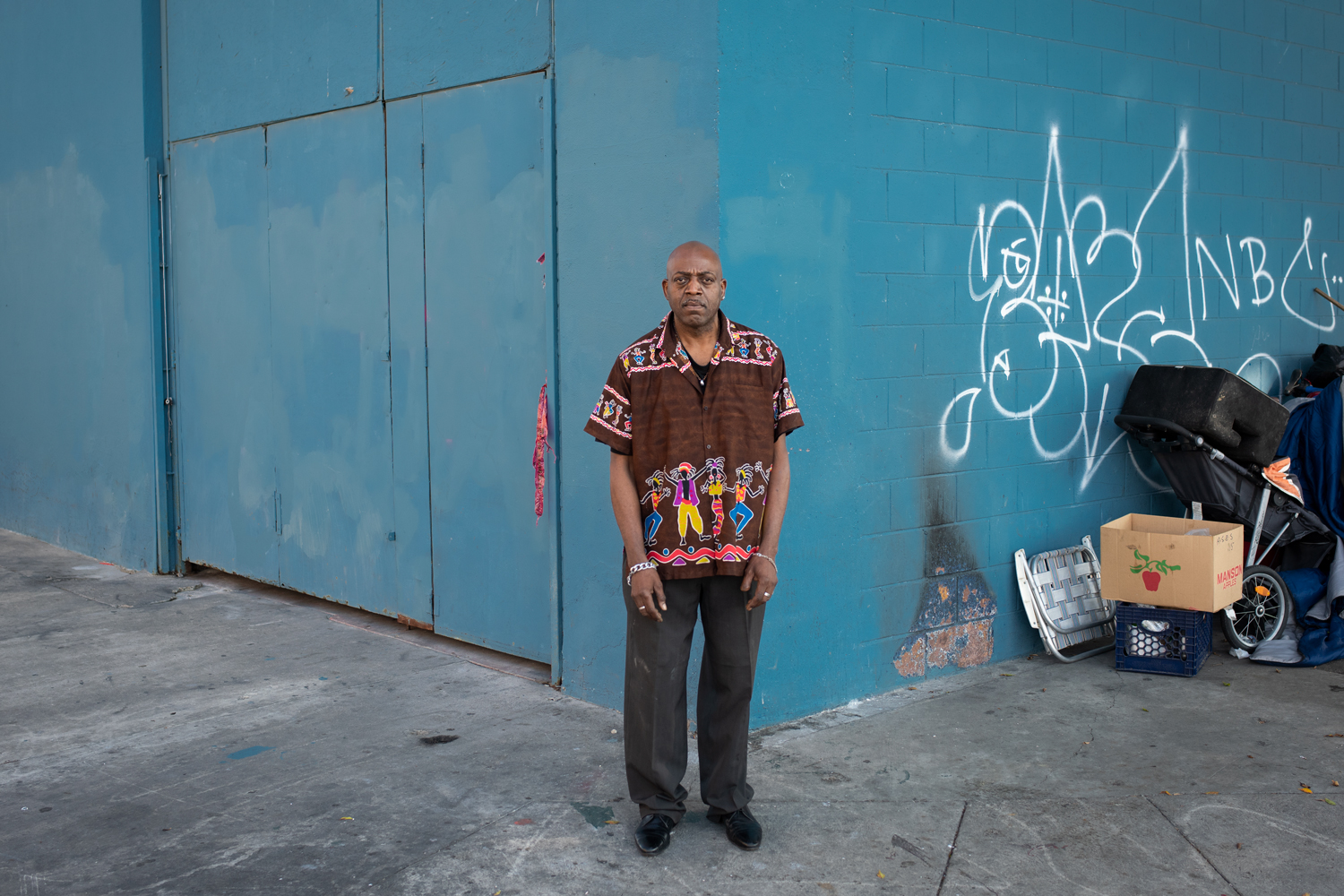 Ace resides on what he considers “prime real estate”—an outlying area near 5th Street and Central Avenue, away from the worst of Skid Row’s drug activity. He has lived there four years, in a tent beneath a plastic tarp. Before his addictions got the better of him, Ace worked as a system administrator at JPL. The married father ekes out a living fixing broken and discarded electronics and running a phone-charging station from his tent. He’s also the man to see about getting power hooked up in an encampment. “Technology changes, but the laws of electricity don’t,” he says. After years of living in the streets, he says, his philosophy for staying safe is simple: “Know what’s going on, but mind your business.” 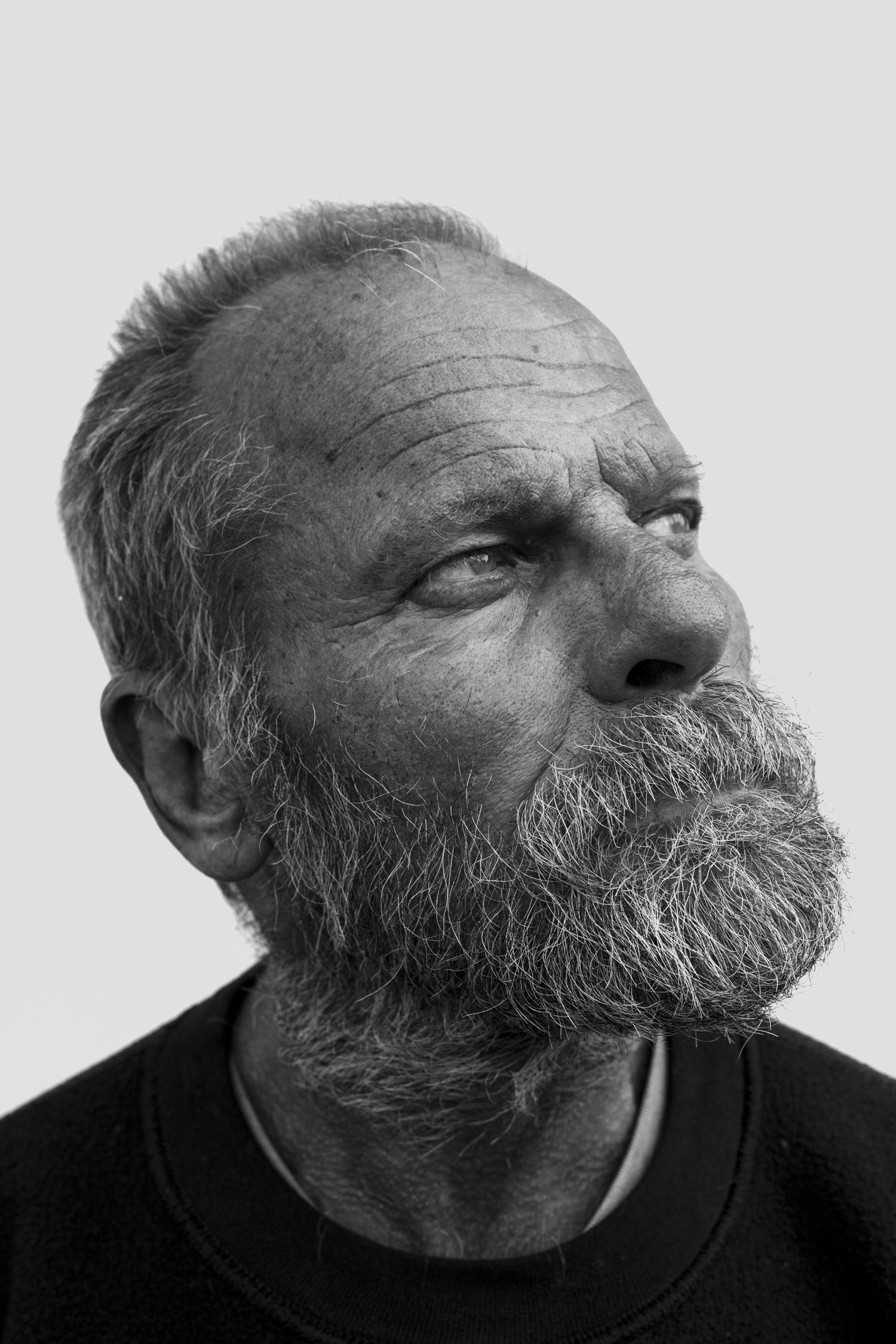 Rodney, 60, of Pasadena, estimates that he has spent 36 years in the prison system. He admits to having violent tendencies and says he sticks to the outskirts of Skid Row to avoid getting in fights. In the months before this photo was taken, he suffered a stroke and a heart attack.