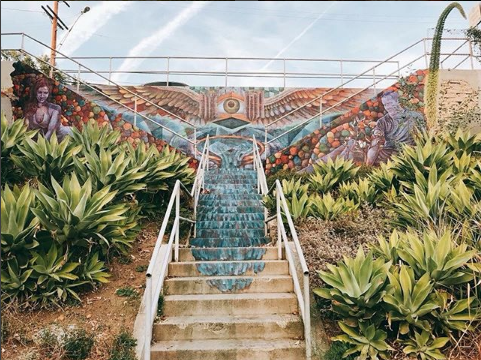 Dan Gutierrez, founder of the blog SoCal Stair Climbers, has covered a lot of territory in his quest to catalog the region’s public stairways, but hilly Silver Lake is his favorite place to step it up. “It’s the stairway capital of L.A.,” says the bearded, bespectacled 56-year-old, and many of those stairways (vestiges from when the city had a trolley system) are decked out with murals. Gutierrez leads a popular 6.7-mile tour of painted stairways in the area six times a year.

You can peep half a dozen of them on this trek through hillside neighborhoods. Start at the south end of the Silver Lake reservoir, where Silver Lake Drive meets Westerly Terrace. Walk south for about three minutes and you’ll spy a brilliant streak of blue ascending the hill, the first of three stairways painted by muralist Evelyn Leigh that are often referred to as the Swan Steps. Once you’re at the top, the second steep flight is slightly to the right and adorned with a bright geometric pat- tern. After that you’ll see a bright blue retaining wall emblazoned with the phrase je t’aime Los Angeles followed by a stairway covered with cloudy peaks. When it ends at Webster Avenue, hang a left. At North Dillon Street, go left again and walk to Effie Street. Swing right, then make a quick left on Cicero Drive, which takes you to the unpainted stairs that descend to Redcliff Street. One left and two rights (Murray Drive, then Berkeley Avenue) lead to Micheltorena Street. Take a left to Sunset and pause for a pick-me-up at the Alfred Coffee, where the floral wallpaper is as ’grammable as the #StairCandy stairs by Corinne Carrey you’ll find directly across the street.

Step around selfie snappers as you ascend the first flight, then make a left onto Larissa Drive, taking in sweeping views of the city, and another onto Descanso Drive to get back on Sunset. Cross over and go toward Alfred Coffee, keeping an eye out for Carrey’s Piano Key stairway on the right at 3229 Sunset. Head uphill on Murray Drive, which you’ll follow until it ends. Go right on Berkeley Avenue, and take a slight left onto Redesdale Avenue. A left and a 0.3-mile stroll along Rotary Drive brings you to the silhouettes of coyotes, raccoons, and skunks that artist Joey Franks painted on a wall. Walk down the stairs and continue downhill along Effie Street. A left onto West Silver Lake will eventually return you to the reservoir.

Here are three other artful stairways that are high on Gutierrez’s list:

The neon snakes slithering up the steps of the 4th Street Bridge, which connects downtown and Boyle Heights, were painted by John Cuevas in 2017. “It’s so unexpected in that industrial, gray part of the Arts District,” says Gutierrez.

Ricardo Mendoza’s Fluid City Rising at the northern end of Hoover Street in Los Feliz is one “the most ‘wow’ of all the painted stairways I know,” says Gutierrez. A winged eye gazes out from the center, flanked by moody blue figures on two retaining walls.

A stairway connecting North Figueroa Street and Glen Arbor Avenue in Eagle Rock features people practicing tai chi in a mural by Roger Dolin. “The people in the mural are actually people from the studio where he first did tai chi in Eagle Rock,” says Gutierrez.

RELATED: These Nondescript Stairs in Silver Lake Are Actually a Memorial to a Gay Rights Game-Changer