Home Food & Drink Pizzana Is Everything You Hoped It Would Be 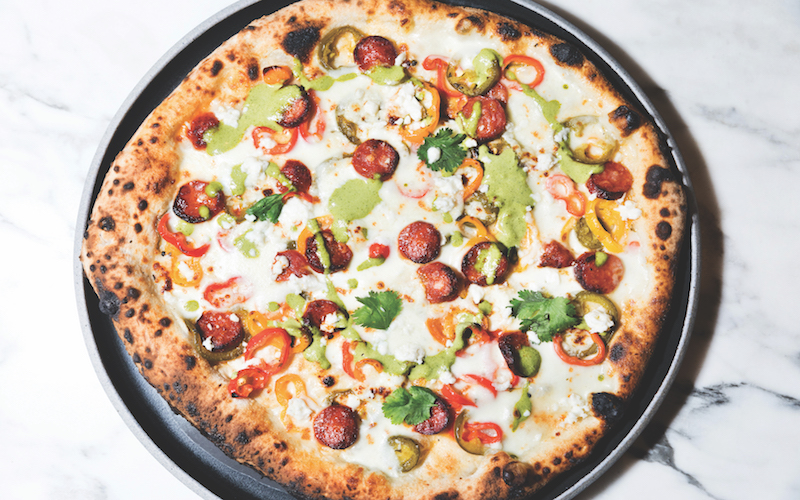 A narrow wedge of a room, the former Adoteca space on San Vicente Boulevard, has found its true purpose as a swank neighborhood pizza spot. The color flowing over upholstered booths and staff uniforms is a shade of turquoise that lies between that of a Mediterranean inlet and the latest calfskin shoulder bag from Cellerini. A barely contained joviality fills the 45-seat restaurant during service: Kids, harried parents, friends, and grandparents fill the tables, which radiate outward from the wood-burning oven. They heap San Marzano jam over country bread, ask about the market price of truffle pizza, and devour slices of the Bianca, with its shaved fennel and onion—which goes well with a $9 tumbler of Sicilian red.

It’s not easy to make over the local pie joint, but Pizzana’s owners, Candace and Charles Nelson, already did it with cupcakes when they founded Sprinkles in 2005. Together with actor Chris O’Donnell and 32-year-old chef Daniele Uditi, they’ve turned their attention to reimagining an urban institution with equal parts purism and playfulness.

A native of Naples, Uditi came to L.A. lugging carefully wrapped jars to transport the dough-fermenting starter his family has maintained for decades, and he retains an assured curiosity about the age-old art of pizza-making. He doesn’t use standard Caputo 00 flour in his crust but rather a nuttier blend that incorporates sprouted wheat. He’s focused on pies whose toppings don’t slip off at first bite. Most impressive, however, is an open-mindedness that has him layering chorizo and queso fresco on the Messicana and a hearty short rib ragù (what he calls “Neapolitan Sunday gravy”) on the Pignatello.

In a real twist, appetizers and salads are not afterthoughts but highlights. The addition of apples, pistachios, and shallot dressing turns shaved brussels sprouts into a discovery. Chocolate olive oil cake doesn’t have the rustic austerity the name suggests, but I’ve made too many withdrawals from the Sprinkles cupcake ATM to suggest great icing doesn’t cast its own spell.

RELATED: 21 Pizzas in L.A. You Need to Eat Before You Die