Home Drinking This DTLA Distillery Is Set in a Jungle, Ferries Visitors by Riverboat,... 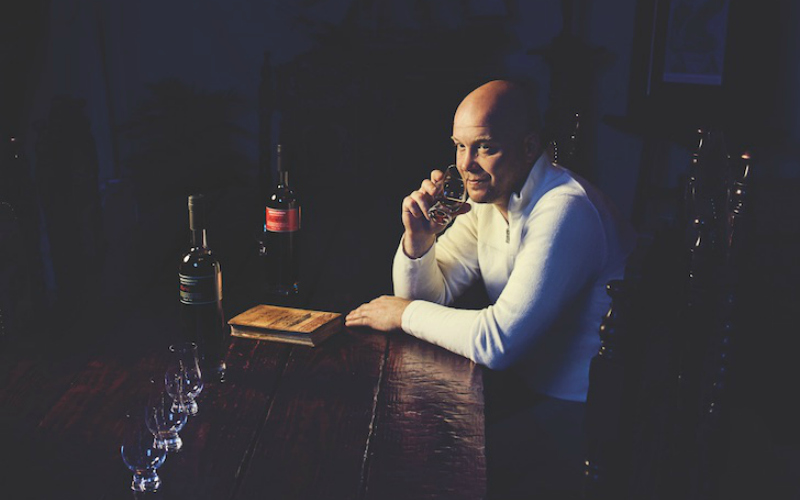 The first sign of peculiarity at Lost Spirits Distillery is the massive Queen of Hearts painted around the door. Knock and her eyes dart from side to side, welcoming you into an Arts District warehouse hidden along an industrial stretch of 6th Street. Inside, the triceratops topiary that guards the waiting room wiggles and coos when you stroke its chin. But the Wonka-esque touches within this squat gray building are only a part of mad scientist-slash-master distiller Bryan Davis’s vision. There’s also this: patented technology he uses to make award-winning “flash-aged” liquor.

The flagship bottle at Lost Spirits is an overproof “navy-style” rum that’s as dark as coffee and has the complex funkiness of something that’s spent two decades in a barrel. It takes Davis—a man known to wear a pith helmet to work—a mere six days to produce. Instead of putting booze into casks, he does the opposite: sinking oak staves into rum-filled glass tubes and blasting them with heat and incredible amounts of high-intensity light, causing the wood to impart flavor compounds as it degrades. In an industry where demand for brown spirits far outpaces supply, Davis has seemingly hacked the aging process.

Lost Spirits moved to L.A. a year ago, but the experimentation began up north in 2010, when Davis and his girlfriend operated a custom outdoor still in the middle of a Castroville artichoke field. “We planted garlic so that if we blew up the place, we’d at least have garlic-roasted artichokes,” he says, eyes widening as if he’s picturing the explosion. He and his team engineered everything in their new headquarters, from the 250-gallon copper fermentation tanks to a copper steam-venting dragon. Davis, a former theme park designer, is as enthusiastic discussing the molecular makeup of esters as he is about talking Halloween decorations. “I have a stash of animatronic pirates saved for a moment like this,” he says with a grin.

Guided tours are offered on weekends (they require a signed waiver). The main mode of transit through the building is a sphinx-adorned boat, which shuttles visitors between elaborate tasting rooms in the misty darkness. There’s a lantern-lit rum bar inspired by Pirates of the Caribbean as well as an Island of Doctor Moreau safari tent, where a peated Islay whiskey called Abomination is poured. There’s also a gift shop with an Enchanted Tiki Room-style parrot show.

For all of the wacky iconoclasm, though, Davis has a romantic justification for his showmanship: “Walking into a cellar full of barrels, smelling the mold growing up the walls, there’s a sense of ancient awesomeness. If you’re going to take that away, what are you going to put into that void?”

RELATED: These Three Made-in-L.A. Bottles Will Add Hometown Flavor to Your Home Bar

Get a Double Buzz with Cold Brew Coffee Whiskey

Heads Up: There’s an Award-Winning Vodka Distillery in an Arts District Loft