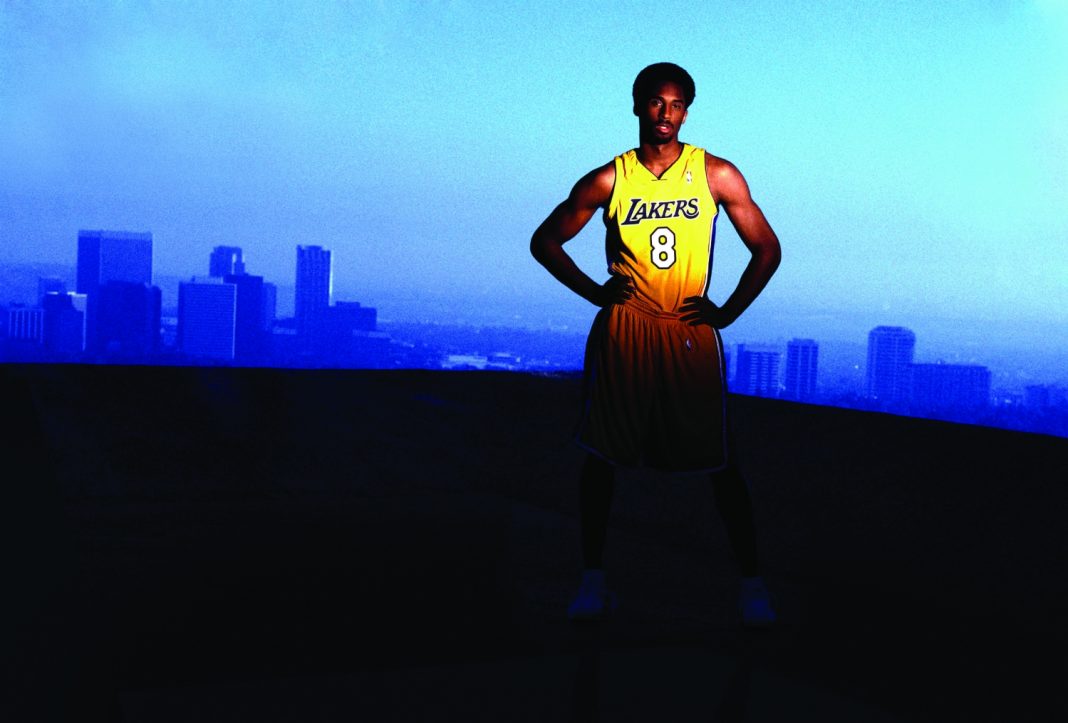 It wasn’t a complete resurrection, but it’s as close as we’ll ever get. Should you ever doubt that a city can hold its collective breath, consider the night of Kobe Bryant’s collapse—April 12, 2013. Amid the airless, neon luxury of Staples Center, Kobe writhed on the hardwood, attempting to reconnect his ruptured Achilles tendon to his heel by hand. Twenty thousand howling apostles silenced in tomblike quiet.

Visualize it once more. Those fabled seconds ingrained in the highlight-reel hippocampus of every Laker fan. With supernatural grit, Kobe peeled himself off the ground and gingerly stepped to the free-throw line like his sneakers were lined with tacks. For the last 17 years he’d willed himself to become the greatest Laker among all the purple-and-gold immortals canonized in the arena’s rafters. Then on a routine slash to the basket, his Achilles recoiled like a child’s snap bracelet. He’d later compare the feeling to a blowtorch held to the back of the head. Under no circumstances should he have walked, much less swished two free throws to tie the game with minutes left in the fourth quarter—34 points for the night. Grimacing in agony, he exited to gladiatorial applause. The TV cameras fixated on Jack Nicholson offering a standing ovation, jaw slightly agape, awestruck like Batman had triumphed once again.

“For a century Hollywood had packaged and exported popular myths to the world, and Kobe became the most revered franchise of them all.”

The umbilical connection between Los Angeles and Kobe became instantiated in that moment. For a century Hollywood had packaged and exported popular myths to the world, and Kobe became the most revered billion-dollar franchise of them all. During his 20 years on the court and his tragically abridged postgame career, the self-anointed Black Mamba was as keenly attuned to his branding, narrative, and self-iconography as any A-lister. A flesh-and-blood superhero naturally only vulnerable in the same spot as the greatest warrior of The Iliad (which he read in Latin as a nine-year-old). Even Kobe’s corporeal limitations felt ordained. His game was so dazzling and clutch that it elicited a blockbuster movie’s willful suspension of disbelief. Throughout his five championships, things usually felt divinely scripted—sometimes almost too on the nose—until the abrupt conclusion that will always feel unreal.

The headlong love affair began in 1996, the moment he levitated into town and immediately shattered his wrist playing pickup hoops on the Venice Beach basketball courts. Where else to cement a bond with his new hometown than on the blacktop recently consecrated by the film White Men Can’t Jump? In a city where every cliché is somehow absolutely true and completely false, the same perplexing logic applied to Kobe. He was the Golden Child, the multilingual prodigy born to a former NBA player, drafted out of high school around the same time that he took Brandy to the prom. Googly-eyed hype came straight from Laker legend Jerry West—the league’s literal logo—who called Kobe’s predraft workout the best ever. For a city seeking a savior in the wake of apocalyptic earthquakes and fires, Kobe was basketball Jesus. So much so that he turned down Spike Lee’s
offer to star as Jesus Shuttlesworth in He Got Game because he needed to spend the offseason refining his real-life craft. (Lee later filmed him for the celebrated documentary Kobe Doin’ Work.)

The opposite was also true. Kobe deceptively embodied the underdog spirit elided in one-dimensional narratives that misapprehend Los Angeles as little more than the sum of Hollywood, Silver Lake, and Santa Monica. From his first 360-degree slam, Kobe was beloved by the working class and the first- and second-generation immigrants that comprise the spinal cord of the city. Whether you were a day laborer or a small-business entrepreneur trying to snag a piece of the Southern California dream, you could identify with his indefatigable work ethic, self-sacrifice, and dedication to family. The folkloric 3 a.m. workouts, the indomitable drive to play through debilitating pain, and his Spanish fluency, all endeared him to those invisible at black-tie awards shows—not to mention the rare filial loyalty that led him to remain with the same franchise for 20 seasons. At barely 6-foot-6, he was comparatively slight to the Goliaths stalking the NBA, which only made him that much more relatable to a generation tirelessly mimicking his jackknifing, buzzer-beating, fadeaway jumpers.

Greatness isn’t merely enough to conquer a city like Los Angeles; it’s imperative to seize the imagination. Take Dodger star Cody Bellinger, the reigning National League MVP, who by sheer talent and precocity alone should be the toast of the town—except he’s so blandly affable that you probably wouldn’t notice him if he was lingering next to you at Zankou Chicken. Kobe can’t be replicated: a ruthless champion with both a killer’s instinct and a blinding smile that could blot out a young Tom Cruise. A Sun King’s sense of manifest destiny and high-fashion cheekbones sharp enough to gouge an eye out.

From day one the entertainment industry besieged him. Cameos came on Moesha, Arli$$, and All That! (where a preteen Amanda Bynes was so infatuated with his good looks that she entrapped him in a cage). Kobe met his wife, Vanessa, on the video shoot for “K.O.B.E,” the first single from a never-released major-label rap album. The hook featured Tyra Banks cooing a love rhapsody to him. He’d later star in Nike commercials teaching his “Kobe System” to Kanye West. Kendrick Lamar narrated a tribute video to Kobe upon his retirement. Murals of him abound inside superfan Snoop Dogg’s Inglewood studio compound.

But it was clearly evident that Kobe’s greatest gift for performance would always be on the court. You can’t discount the sheer aesthetic beauty and improvised solos that characterized the high-flying first half of his career. And after injuries and aging dulled his supreme athleticism, he reinvented himself as a hyperfocused terminator, prone to an anachronistic style of isolationist hero ball. And it only redoubled the fervor of the Kobe cult, who saw him as a romantic nostalgist, the Sinatra of the Swoosh, only capable of doing it his way.

“This affinity for what he called “dark musings” gave him his greatest source of energy and power. He in this villainous fun-crusher role.”

If there was an extracurricular genius to Kobe, it revealed itself through his savvy understanding of story and the need for evolution. It was little surprise that his postgame work-life revolved around a nascent production company focused on storytelling—which won him an Oscar and a Sports Emmy for the John Williams-scored short Dear Basketball. In interviews he routinely named his favorite fictional heroes (Arya Stark, the Dark Knight, Jason Bourne, James Bond) as well as his preferred antagonists. The Star Wars junkie once claimed he most identified with Darth Vader, adding, “but I don’t take orders from the Emperor, so maybe [it’s] Darth Emperor.” In his comeback game after his Achilles tear, he jogged onto the court to the strains of the “Imperial Death March.” Had he read Moby-Dick, he inevitably would’ve viewed the monomaniacal whale slayer Ahab as the hero.

This affinity for what he called “dark musings” gave him his greatest source of energy and power. Kobe reveled in this villainous fun-crusher role. In one Nike commercial that aired around the time of his retirement, he plays “The Conductor,” gleefully leading a symphony of seething fans and historical rivals crooning about their hatred of him. Whether consciously or not, he became the manifestation of the long-standing revulsion of Los Angeles, a place historically mocked and dismissed, reduced to shallow tropes that nullify its inherent complexity. In his natural polarities he distilled the sunshine-and- noir dialectic that still governs a city that evades simple good-vs.-evil analysis. There was, of course, the side of Kobe less scrutinized. A local pillar of the Make-A-Wish Foundation, he hosted basketball camps for the Boys & Girls Club of America and raised millions for charities ranging from cancer research to youth homelessness. Yet this three-dimensional portrait made less marketing sense than the Zen basketball-obsessive selling the win-at-all-costs Mamba Mentality.

But it’s one thing to conceive the myth, it’s another to actually conjure the reality. None of this would have been possible had Kobe not consistently defied expectations and terrestrial limitations. He played like he was trying to bring an epic poem to life—and fittingly announced his retirement with a poem. Of course he’d score 60 in his final game to lead a come-from-behind victory. Like L.A., subtlety was never his strong suit. Besides, no one ever looked to the Greek gods for nuance. And so in the wake of his tragic demise, he ascends to Olympus the way he’d always intended, a patron deity forever sanctifying this city. The ending will always remain a bleak tragedy, but the outcome was never in doubt.

RELATED: How Kobe Got His Game On