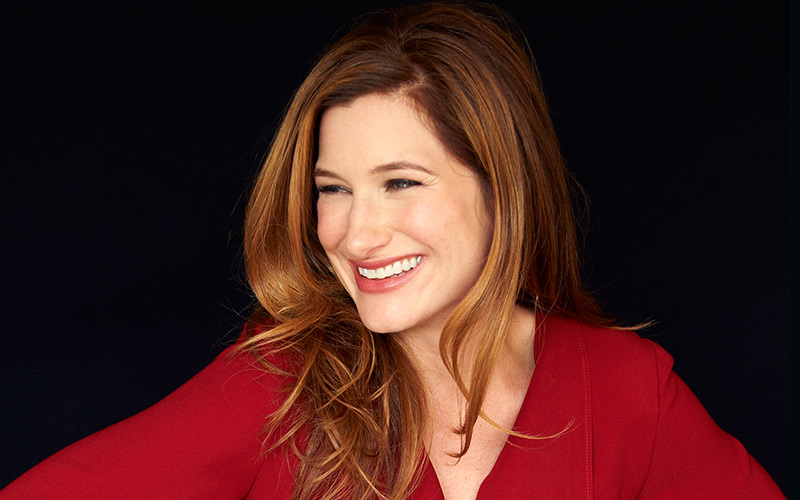 Kathryn Hahn has an actual celebrity superpower: Whether she’s got 5 lines or 500, she makes decent things good (How to Lose a Guy in 10 Days, Step Brothers), good things great (Girls, The Newsroom), and great things brilliant (Parks and Recreation, Transparent, the latter of which finally earned her an Emmy nom this year). It’s a gift that Hollywood is mercifully starting to wise up to. In 2016, the Cleveland-born, Los Feliz-based 44-year-old landed her first leading role in Amazon’s I Love Dick, an uncomfortably intimate series from Transparent’s Jill Soloway. The show gives Hahn freedom to tack between her comedic and dramatic abilities in ways that sidekick parts rarely did (she’s often referred to as a veteran character actress—which isn’t a misnomer when you look at much of her work through 2013—but nuance suits her).

This month Hahn jumps back into big-budget comedies with A Bad Moms Christmas (November 3), a film about three matriarchs (Hahn, Mila Kunis, and Kristen Bell) who let off holiday-fueled steam with lots of booze and questionable decisions (“Next time we’re going to do Bad Moms Live,” Hahn jokes). Here she talks her future waxing career and child-rearing with Joni Mitchell.

What’s in the quintessential bad L.A. mom’s purse?
Just to make it real, I would say a stun gun. Marijuana mints—just a lot of edible marijuana.

Do they even make those? Marijuana mints?
Yes they do, and they’re fantastic.

Your Bad Moms character is an aesthetician. Inappropriate name for your future waxing salon?
Tainted Love. Or Taints ‘N’ Things! But it has to be an N with apostrophes on both sides of it and an exclamation point.

Which TV mom could be in the Bad Moms crew: Tami Taylor, Clair Huxtable, or Sophia Petrillo?
All three are goddesses. Tami’s hair is extraordinary—there would be some hair flip battles for sure. And then we would have a scene in the bathroom with blow-outs and drunken flat-ironing.

If a musical revue of your life opened tonight at the Pantages, what would it be called?
Probably She Picked the Wrong Battle! also with an exclamation point. Or it could be called Passing the Clap. I love the double entendre.

Three L.A.-based dudes you’d cast in Bad Dads?
I’m going to go out on a big limb here. In my dream, it would be like James Spader—SO RANDOM—Ice Cube, and then Rob Lowe for the beautiful. I want to see those gentlemen on a wild ride.

Is James Spader funny?
I don’t know! Who knows! It could get really dark, but he’s a legend. It would be hilarious to witness.

Three Angelenos, dead or alive, you’d start a “Mommy and Me” class with?
Mary Steenburgen, Diane Keaton, and Joni Mitchell. We’d be ladies of the canyon. We’d have no shoes on and play with pots and pans. We’d lie around on yoga mats and give each other massages. We’d communally take care of the babies while enjoying very intricately prepared vegan cuisine and white wine. I want to do that right now.

Transparent Is Back with a Gloriously Awkward Trailer for Season 2

My LA to Z: Kathryn Hahn