Home Holiday Here’s What L.A.’s Top Pastry Chefs Are Cooking Up for the Holidays 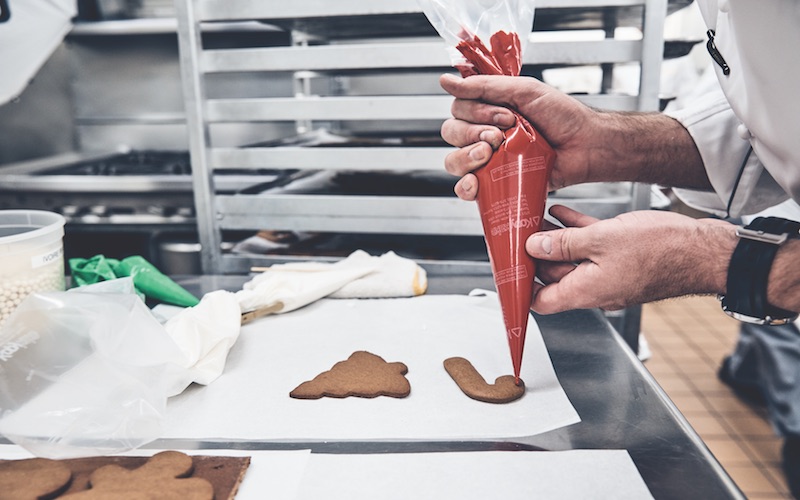 Christmas clarifies the appetite. We know what we want. By late December the tables have been pushed aside at Tamales Lilianas because, let’s face it, the crowds aren’t coming to the Boyle Heights institution for carne asada. The only question is how many dozen to order with red chile, and how many with pineapple and plump raisins.

But for most pastry chefs the brainstorming begins much earlier, about when pumpkins are being stacked in supermarkets. “Eggnog espresso layer cake, rice bark brittle, seasonal pies is what I’m remembering,” texted Sycamore Kitchen’s Karen Hatfield, in response to my questions about her holiday plans. Roxanna Jullapat of East Hollywood’s Friends & Family sent me a picture of a cookie tin bearing a Post-it scribbled with ideas. I could make out “thick mint” written in Sharpie.

From the kitchen in downtown’s newly launched Fundamental, Beth Kellerhals told me she’d be offering the French Yule log speciality bûche de noël. She’ll make the exterior look properly woodsy by running an offset spatula along the ganache, but nothing else about the final appearance was clear yet. “There may be gnomes,” she said.

Chris Ford, pastry chef at the Beverly Wilshire, had to plan further ahead—which makes sense, given his task: constructing an eight-foot-tall gingerbread house to be displayed in the hotel lobby. Long before Santa and his sleigh were hoisted above Wilshire Boulevard, the scent of nutmeg was already wafting through the hotel’s basement corridors. In September, Ford and 25-year-old assistant Christina Au were rolling two-foot-wide sheets of dark dough into what might be likened to sheetrock panels bearing notes of molasses. How many would they need? He ballparked it at 50. What about all the holly and star cutouts he’d colorfully dot with frosting? Maybe a thousand. To apply the wall coloring he’d be using what else but a Wagner Power Painter.

The house itself isn’t intended to be eaten, but Ford plans to stock the inside with cookies, creaming butter and sugar together like he did as a kid in Orlando helping his grandma make peanut tassies. You get a lot of that with holiday goodies— bakers sneaking something personal into seasonal demands.

For Hans Röckenwagner the cake-like stollen he offers at his eponymous Mar Vista bakery is the stuff of memories, one slice of the bread enough to transport him to his German childhood home. A specialty of Dresden, the candied citrus bomb is heavily dusted with powdered sugar (think of the beignets at New Orleans’ Café du Monde, then add more). Each winter a package would arrive from relatives in East Germany, the heavy wrapping of newspaper, cloth, and twine the only barrier between him and the yearly treat.

A post shared by Rockenwagner Bakeries (@rockenwagnerbakeries) on Dec 7, 2015 at 4:32pm PST

Perhaps that’s part of the magic: anticipation, but not the kind delayed too long. Whether it’s a steamy unpeeled corn husk, a cookie tin to be pried open, or a mysterious curtain hanging in a hotel lobby, the “sweet devouring” that author Eudora Welty wrote of is quickly upon us, disappearing in a blur of crystal and crumbs. “You can’t eat stollen,” says Röckenwagner, “and stay clean.”

RELATED: Every L.A. Tree Lighting Your Festive Heart Can Handle