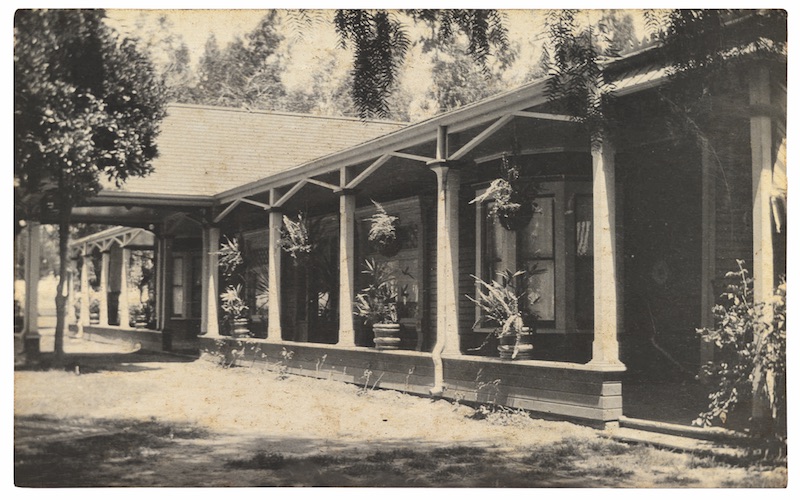 Photo from the Huntington Library

Gage Mansion is as difficult to find as it is to pin down. Google Maps directs would-be visitors to a bed-and-breakfast in Pennsylvania. You can drive by it a hundred times without seeing any evidence that the place exists. But there it is, tucked among 56 mobile homes in Bell Gardens: the oldest home in L.A. County and a state historic landmark, owned and operated by the Casa Mobile Home Co-Op.

The single-story adobe was built in 1795 by Francisco Salvador Lugo, once one of Alta California’s largest landholders. For nearly a century the 6,700-square-foot house was the headquarters of a working rancho that grew smaller and smaller as it was divided up and sold off. In the 1880s, the home was given to Henry Gage (who would become California’s 20th governor) as a wedding gift when he married into the family. A Lugo descendant owned and managed the trailer park and lived in the ancestral home until the early 1980s.

To survey the house is to witness centuries of design trends: Inlaid parquet floors and ornately tiled fireplace surrounds lead to a hallway with orange shag carpeting, while French fabric wallpaper adorns rooms that sit hard by others with faux-wood paneling. The gables and wood siding outside were elements of a Gage-era remodel.

Living steps from the mansion has turned Rafael Ruiz into something of a history buff. Energetic and trim, the 67-year-old retired lab technician wants to restore and promote the property. All he needs is buy-in from the other residents. See, the upkeep of both the grounds and Gage Mansion comes from the residents’ $150-per-month association fees. It’s not enough, he says, to do justice to the home. He and a few others have tried to persuade the co-op to approve a $50 monthly increase, but they don’t have the votes yet. “I talk to them at meetings; they don’t care,” Ruiz says. He seems baffled by the lack of interest in the site: “We just need to make people get interested. This place is a historical landmark!”

The neighborhood once had a sense of optimism about the mansion. “We were so excited when we first bought this place,” says Neva Allen, an 83-year-old retired waitress, from her back porch overlooking the Rio Hondo bike path. There was a spirit of community in those days, with residents joining the City of Bell Gardens and a nonprofit to save the property from being sold in 1983 to developers. Instead the owners sold the trailer park—mansion and all—to its residents. “We all looked forward to this co-op thing, once we understood it,” says Allen. After paying off the mortgage, they began marking the date each year with a celebration. Back then frogs and herons inhabited the flood-control channel outside the park, and tourists would stop in to see Henry Gage’s old home. “We used to have a bingo license, and once a week we’d play bingo,” says Allen’s daughter Ruby. “We played for canned food. It was like a big family.”

But those days are gone. “We had too many residents that didn’t want strange people walking around,” Allen says. “The whole park was fighting. I just got fed up trying to keep the board going; I served two terms and said, ‘That’s it, forget it.’”

Allen is on a fixed income, but she’d vote for a fee increase. “I’d like it to go back like it used to be,” she says. Ruby thinks newer residents should have to bear the cost. “I paid my dues a long time ago,” she says. “We already paid off the mortgage.”

For Ruiz, this is about more than money; it’s about heritage. The house embodies “two different cultures,” he says: “The Spanish and the American.” Originally from Jalisco and descended from Spaniards, he feels he and the house have a shared history. Ruiz can hardly bear to think bigger but admits what he really wants: to see Gage Mansion fully restored, a proper museum. For now he’s settled for spending a lot of time on the internet, digging for old stories to tell the mansion’s few visitors. “Who else is going to do it?” he says.

RELATED: The Playboy Mansion, in Movies and TV