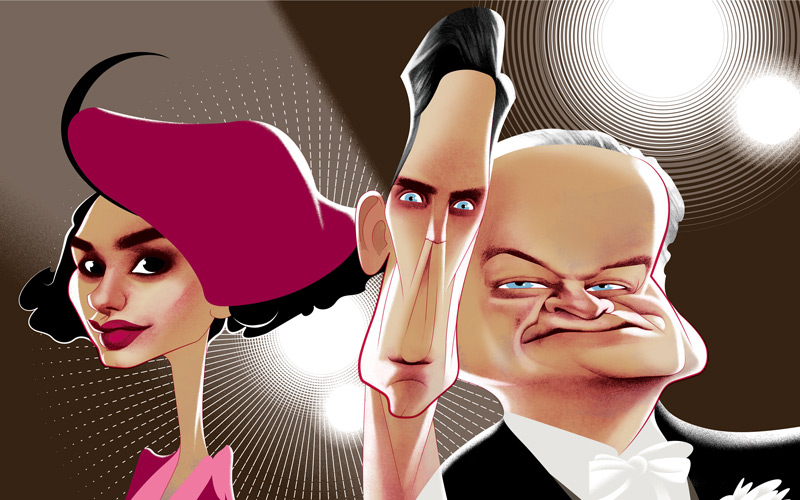 In Amazon’s irresistible new series The Last Tycoon, Monroe Stahr is a young executive at a major 1930s Hollywood studio who has an unerring feel for what makes movies work and what audiences want from them. Haunted by the premature death of his marquee-star wife, he has a congenitally defective heart with a fuse lit by his memories; whatever is left of his life is emotionally triangulated by the love he’s lost, by the new love who seems to be his dead wife’s reincarnation but for her claim that she has no interest in movies whatsoever, and by college girl Cecilia, who loves both Stahr and the cause of the labor unions that vex her father, the studio’s reigning mogul and Stahr’s boss. Persuasively played by The Normal Heart ’s Matt Bomer as equal parts guile, charm, and torment, Stahr was the creation of F. Scott Fitzgerald, author of the novel on which The Last Tycoon is based, and ostensibly was  modeled on Irving Thalberg, the real-life producer and renowned “boy wonder” of MGM in its Depression-era heyday. Briefly a character in the series, Thalberg is a metamirror in which Stahr glimpses a prophecy of private doom.

Anyone familiar with Fitzgerald’s novels, however, knows that like Jay Gatsby and all the writer’s protagonists, Stahr’s real model is Fitzgerald, a onetime boy wonder himself. Fitzgerald’s own heart was on borrowed time, so cracked by the author’s sense of failure as to barely pump out the 44 years that expired before The Last Tycoon was finished. Boy wonders grow up and don’t always bring their wonder with them into manhood. That Fitzgerald became a better artist as his more precocious triumphs faded was less important to the contemporary reading public than that he was old before his time, dying with less notice than he commanded in a gaudier and more extravagant youth. The funny thing, assuming you share destiny’s bitter sense of humor, is that in the decade after his death in 1940, Fitzgerald came back into vogue, the resonance of his work surpassing that of ingrate buddy Ernest Hemingway, whom Fitzgerald selflessly championed when Hemingway needed a champion and who didn’t feel particularly bothered to champion Fitzgerald in return. It took a while before The Great Gatsby—that epic masquerading as a twilight reverie and published before its author turned 30—proved one of the 20th century’s three or four most enduring American novels.

When Fitzgerald wrote his famous line about no second acts in American lives, he was talking about himself. If any life in this world has a second act, however, it’s an American one, with no better example than Fitzgerald’s, whose second act simply survived him. As we see in Amazon’s other, inferior Fitzgerald-related series from this year, Z: The Beginning of Everything, Fitzgerald didn’t exactly make his first act easy. The only way he knew how to drink was too much; he had a chip on his shoulder about rich people who impressed him more than he knew they should; and he took himself too seriously, if you can imagine such a thing as a novelist taking himself too seriously. But he took his work more seriously than he took himself, work that continues to grip the imagination in the form of a Fitzgerald mini phenomenon that includes the two new Amazon series, Baz Luhrmann’s successful and critically underrated adaptation of Gatsby a few years back, and at least two upcoming pictures about Fitzgerald and his illustrious wife, Zelda, reportedly to be portrayed by Scarlett Johansson and Jennifer Lawrence. That Zelda is her own story is the point of Z, with Christina Ricci in the role, and over the last half century the Alabama belle Zelda Sayre, who was Fitzgerald’s sometime muse, became a feminist totem, a woman allegedly used and exploited by her husband and driven to the madhouse, where she died after he ripped off her diaries. Let’s just add that the Fitzgeralds’ only daughter made publicly clear she never believed this premise that’s at the center of Z, which also seems to assume Fitzgerald’s novels are mere assemblages of pretty sentences without insights into the character of the country, the nature of the times, and the curse of dreams that are bound to dim.

By the time Fitzgerald was ensconced in Hollywood, he was deep in debt and had a gossip-columnist mistress, his young assistant was dumping his empty liquor bottles in Laurel Canyon in the dead of night, and The Last Tycoon was as haunted by the ghost of the institutionalized Zelda as is Monroe Stahr by his passionate exile. Published posthumously and unfinished, The Last Tycoon first was adapted to the screen more than 40 years ago, a case study of a whole that was much less than the sum of its parts, the most remarkable thing about it being that any film involving Robert De Niro, Robert Mitchum, Jack Nicholson, Jeanne Moreau, dramatist Harold Pinter, and director Elia Kazan—with eight Oscars, three Tonys, three Césars, two AFI Lifetime Achievement awards, a Presidential Medal of Freedom, and a Nobel Prize among them—could be so bewilderingly bad. Developed and sometimes written and directed by Billy Ray (whose main claim to fame is the screenplay of The Hunger Games but whose more pertinent credit is 2003’s Shattered Glass, a superb character study and meditation on truth and the vagaries of storytelling), the new adaptation has its occasional clichés and lapses; it’s unavoidably preoccupied with the elements of melodrama Fitzgerald utilized rather than his work’s subterranean contradictions that make for tragedies so peculiarly and particularly American, which the novelist caught even when he wasn’t altogether sure how.

Such creative hazards come with the territory of TV and film. By their nature these media are archetypal and reductive, and anyone audacious enough to translate Fitzgerald has to accept that responsibility. But unlike Z (fundamentally miscast and running out of steam before its first season’s end), The Last Tycoon gathers interest by virtue of intrigue, flashes of wit, the shimmering production values that distinguish so much television these days, and complexities having to do with, for instance, Stahr’s Jewishness in an industry of Jewish magnates who don’t want to deal with Nazi reality. Best is a supporting cast dominated by Kelsey Grammer as a craven big shot surprised by his rare redemptive moments, Rosemarie DeWitt as his wife competing with daughter Cecilia—Tycoon’s equivalent of Nick Carraway — for Stahr’s amorous attention in a conflict neither can possibly win, and Jennifer Beals stealing every scene she’s in (too few) as a ball-busting, piece-of-work Joan Crawford goddess with a very American secret. To suggest the series finishes Fitzgerald’s novel as he might have before his story stole his heart for good would be going too far. Such novels find their own way, with such authors knowing it’s their job to barely keep up. But before the series steals Monroe Stahr’s heart for good, I suspect Fitzgerald would recognize in it enough of himself to feel the result keeps faith with a legacy more relevant than ever, in an America increasingly defined by wealth without conscience and power without empathy.