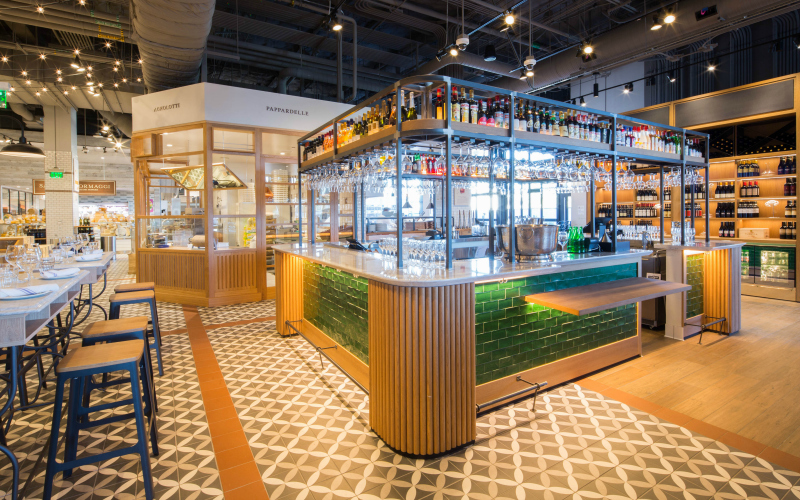 When long-awaited Italian marketplace Eataly L.A. opened in early November—the capstone of a billion-dollar makeover at the Westfield Century City mall—it was a big moment. The three-floor, nearly 70,000- square-foot emporium of prosciutto and Parmesan beat out locations in New York, Chicago, and Boston for sheer size. By any measure, the breadth of food offerings is staggering. There are stations dedicated to wood-fired pizza, fresh pasta, made-to-order salads, and rotisserie meats, as well as a seafood concept run by Providence chef Michael Cimarusti, a wine bar and wine store, and a rooftop grill. And don’t forget the butcher counter, bakery, café and gelateria. Best of all, like an Italia-centric Costco, sampling is encouraged.

Though the chain’s outlets span the globe (there are Eatalys in Tokyo, Dubai, São Paulo, and beyond), its recent arrival on the West Coast, land of bountiful agriculture, seemed especially pertinent. If the heart of Italian cuisine is in pristine ingredients simply prepared, what place could be more fitting? So while this location boasts aisles packed with balsamic from Modena, bright green Castelvetrano olives, and canned San Marzano tomatoes, there’s also dry-aged beef from Marin County, mozzarella made from Central Valley raw milk, and calamari caught off the coast of Monterey.

The synergy, for the most part, feels natural. Eataly has sought to champion the slow-food movement and local terroir. And it’s those little hometown winks that elevate Eataly L.A. beyond megamall homogeneity: Mozza’s Nancy Silverton plans to teach classes at the in-house cooking school, and general manager Marino Monferrato has done stints at Cecconi’s and DeSanos. It helps that L.A. has long had a special affection for the unfussy Italian cooking Eataly traffics in. You see it in the neatly sliced salumi sandwiches 78-year-old Rosario Mazzeo assembles at Pasadena’s Roma Market while surrounded by shelves of olive oil and dried pasta, and in the impossibly tender whole branzino Gino Angelini roasts in herbed salt at his eponymous osteria.

In a lot of ways, Eataly L.A. is a sign of the times. We want a culinary vacation condensed above a parking garage. We want edible escapism. As the food hall eclipses the department store as retail anchor—fueled by our growing obsession with festival-style dining—the appeal of such a broad destination becomes obvious. We used to shop at the mall, then eat. Now we eat at the mall, then shop.

How Our Changing Habits Killed an L.A. Shopping Mall