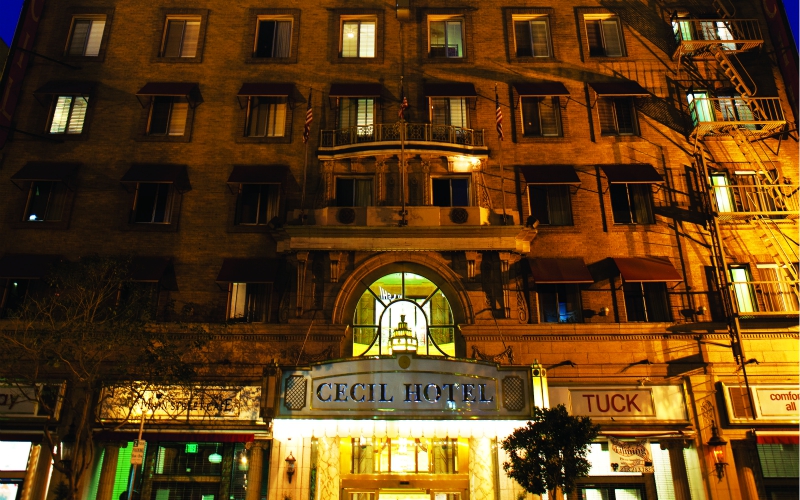 Downtown L.A.’s vintage hotels are rife with legends and lore, from the mysterious deaths that have taken place behind closed doors to the various Hollywood stars who’ve hung their hats for a night or longer. This 1.6 mile walking tour from storied hotel to storied hotel is sure to bring the city’s noirish past to life.

Starting at Pershing Square, walk along West 5th Street to South Spring Street to reach the property. Opened in 1906 as the most luxurious hotel in town, “the Alex” is home to the mugshot-lined Down & Out bar and the Cajun eatery Little Easy. It is also where a man named Vaden Boge ordered lunch for himself and his non-existent spouse in 1922 before fatally poisoning himself. Police wound up searching for the “ghost wife.”

SIDE TRIP:  Three minutes up Spring are the El Dorado lofts, formerly the Hotel Stowell. Aside from hosting Charlie Chaplin, the Stowell was where, in 1932, a guest by the name Louise Hickman also committed suicide by poison, in this case with a tainted peach.

Back on West 5th Street, walk to South Main Street  and turn left. The hotel tried to rebrand itself Stay on Main before the bizarre death of Elisa Lam, a Canadian tourist whose body was found in the rooftop water tank in 2013. Two serial killers, including “Night Stalker” Richard Ramirez, as well as a would-be sniper, an arsonist, and a baby killer have all checked in here, and it’s been the site of several murders and suicides.

Continue down Main, go right on West 9th Street and then left on South Broadway to the former California Petroleum Building, which was finished in 1927. In 1942, Lawrence McClellan, an accountant at the oil company once located here, opened fire on his boss after growing suspicious that he was going to be dismissed. His boss survived, but McClellan died of a self-inflicted gunshot wound. It’s also where, in 1895, a woman found a human leg wrapped in newspaper in the backyard of the house that once stood on the site.

SIDE TRIP:  A right onto Olympic Boulevard and a half-mile walk takes you to the Hotel Figueroa, where, in 1950, the naked body of Hallie Oswald was found in one of the rooms. She had cryptic ballpoint pen messages written on her. Police quickly arrested Harry Gordon, who from the psychiatric ward admitted  strangling his drinking companion, saying, “She was happy.”

From the Ace, continue along West 9th Street, then turn right onto South Grand Avenue. The 1913 budget property is home to Hank’s dive bar, where the staff says the ghost of twice-owner Hank Holzer, a long- deceased former boxer, still makes appearances.

Keep heading northeast up South Grand Avenue back to Pershing Square and the Biltmore. Decorated with angels inside and out, the hotel was the last place Elizabeth Short was seen before she was murdered and became known worldwide as the Black Dahlia. The Gallery Bar’s infamous drink of vodka, Chambord black raspberry liqueur, and Kahlúa was created in her honor.

RELATED: This Guy Stayed in SoCal’s Most Haunted Hotels to Separate Fact From Fiction