Home Top Doctors How an L.A. Hospital Is Using Virtual Reality to Prep Staff for... 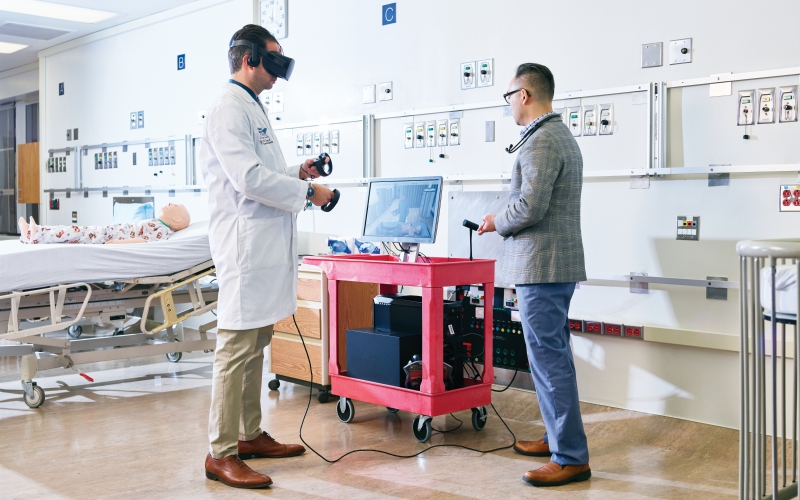 I‘m the attending physician in a pediatric trauma room, and my patient, a girl who looks to be about 12, is going into anaphylactic shock. “Do something,” her mother screams. I check the girl’s breathing (sounds funny); I check her pulse (seems OK, but who knows?). To my right is a red cart loaded with assorted medications. A voice behind me tells me to give her a dose of epinephrine. “Is she dying?” I ask.

I’m not experiencing some sort of medically themed night terror, nor am I the planet’s worst doctor. I’m not even a physician. I’m in the Culver City offices of BioflightVR, testing a virtual reality simulation that Children’s Hospital Los Angeles relies on to help train doctors. Medical centers around the country are beginning to use the technology for a wide range of applications, from prepping physicians for rare and complicated surgeries (separating conjoined twins, removing brain tumors) to interpreting MRI scans to assisting in the rehab of stroke victims (regaining motor function through VR is just as effective as standard physical therapy but infinitely less boring). Patients are also using it to reduce pain (from backaches to severe abdominal pain), stop smoking and overeating, and combat the stress of being in a hospital in the first place.

In my case, the effect is the opposite: The ordeal has made my heart race and my palms sweat, but that’s sort of the point, says company president and CEO Randy Osborn, who’s talking me through the simulation (“You win,” he laughs after guiding me to the right meds to save our patient). Unlike medical training with mannequins—the method of choice to practice for pediatric emergencies of this sort—the immersive nature of VR intensifies the experience. Even if the animation isn’t always Pixar-worthy, you’re pulled into the scene, owing to what designers call “psychological fidelity.” They want medical residents to feel stress, but not so much that it’s incapacitating. “There’s kind of a sweet spot,” says Osborn.

The sim debuted at Children’s in 2016 and marks the first time VR has been used to train doctors in pediatric medical resuscitation. Attending physicians Todd Chang and Joshua Sherman helped create and design the sim, and according to them, resuscitation is one of the crucial “low frequency, high stakes” events—they rarely happen, but when they do, there’s a lot on the line—in pediatric medicine. Teaching new doctors how to deal with them is an ongoing problem. “Everything happens so fast, and everything’s so time sensitive,” says Chang. “You can’t just bring a medical student along and sit down and explain what’s going on.”

At Children’s, the sim center is in the hospital’s former neonatal intensive care unit, which explains the mannequins of all sizes and types, from infants to young boys. Some are the sort you’d see in a CPR course at the YMCA; others are high-tech marvels that can cost upward of $60,000. One blinks and coughs and groans, her chest mechanically rising and falling, like an animatronic president at Disneyland. She’s state-of-the-art as mannequins go, but to set up a scenario with her similar to the VR simulation would require a crew of doctors, techs, and facilitators and take up an entire operating room. “For full-on trauma simulations here, there are about 25 people in the room,” says Chang.

With the VR sim, however, there’s no limit to how many times you can work through a scenario. To demonstrate, Sherman rolls out a Dell PC on a small red cart and pops on a headset. Seconds later, he’s “in” the trauma room, working on the same girl I had been struggling with in Culver City. He’s much faster at everything and saves her in moments. To show me what might happen with a trainee who wasn’t quite so competent, Sherman switches to a simulation in which a baby is having a seizure. He “forgets” to suction out the baby’s mouth, and in seconds the infant stops breathing. The nurse is getting frantic. “It’s literally making me anxious,” Sherman laughs, even though we all know that the baby is nothing more than a combination of colored pixels.

As realistic as the sim is now—in a previous life, BioflightVR’s award-winning design team worked on visual effects for shows like CSI: Crime Scene Investigation and ER— its creators and users envision more. Maybe one day the sims will borrow a page from multiplayer video games and allow doctors at Children’s to virtually save lives alongside doctors in, say, Mumbai. But in the shorter term, there could be an entire library of sims, covering everything from cardiac events to drowning. There could be sims that combine the immersiveness of VR with the tactile reality of mannequins, where you’d work on an actual dummy while inside a virtual world (BioflightVR is designing a prototype). Trainees could log on to any number of sims, practicing over and over again until they get them right. “If you’re going to make a mistake, we’d rather you make the mistake here, so that you can learn from it,” says Chang. “That’s a powerful learning tool—to actually make the mistake and see the consequences.”